Shares of Baidu (NASDAQ:BIDU) sank 32.3% in 2018, according to data from S&P Global Market Intelligence . While the company's stock posted substantial losses last year, the big decline might have had more to do with broader market sentiment that turned bearish on Chinese tech stocks than with the business' performance. 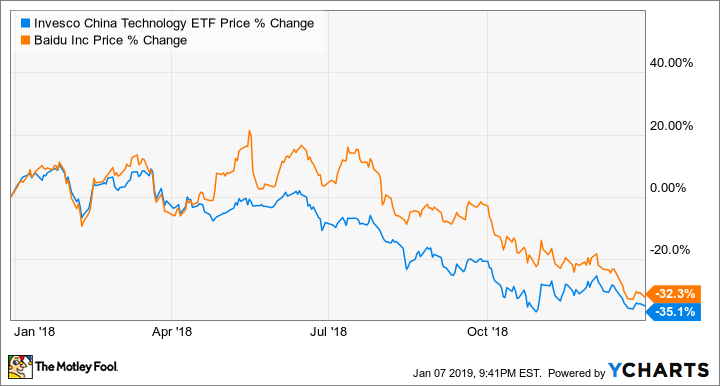 Baidu delivered earnings that consistently topped the market's average target in 2018 and continued to make progress with its innovation initiatives. However, slowing economic growth in China and concerns about ongoing trade disputes with the U.S. appear to have made investors less willing to hitch their money to tech companies with growth-dependent valuations -- and the search giant's stock sank in line with the movement of its sector.

Baidu stock gained an impressive 42.5% in 2017, so it's not shocking that shares gave up much of that gain as the market took a trek into bearish territory. The stock saw notable swings in conjunction with trade developments and news that Alphabet might be readying a version of its Google search engine for the Chinese market. Concerns that the Chinese government could continue to introduce unpredictable road blocks in the online content, social media, and entertainment spaces also weighed on the performance of the country's internet stocks last year. However, investors generally seemed to shrug off strong business performance, and shares traded closely in line with the movement of the country's tech sector across the year.

Baidu stock trades at just 15 times the year's expected earnings. The company maintains a dominant position in its home country's search market that sets it up to continue benefiting from the growth of online content and advertising, and it also looks to be one of China's leading players in promising growth markets such as artificial intelligence, autonomous vehicles, and cloud computing services. Chinese tech stocks aren't for everyone, but for investors seeking exposure to the space, Baidu appears to have the potential to deliver an impressive performance over the long term.