The western footwear retailer announced strong preliminary results ahead of a conference presentation today. Here's what investors need to know.

More specifically for Boot Barn's third quarter of fiscal 2019, net sales climbed 13% year over year to roughly $254 million, helped by a 9.2% increase in same-store sales. On the bottom line, that translated to net income of $0.66 per diluted share, up from adjusted earnings of $0.46 per share in the same year-ago period. By comparison, Boot Barn's latest guidance (provided in October) called for lower same-store sales growth of 5% to 7% and earnings per share in the range of $0.56 to $0.60. 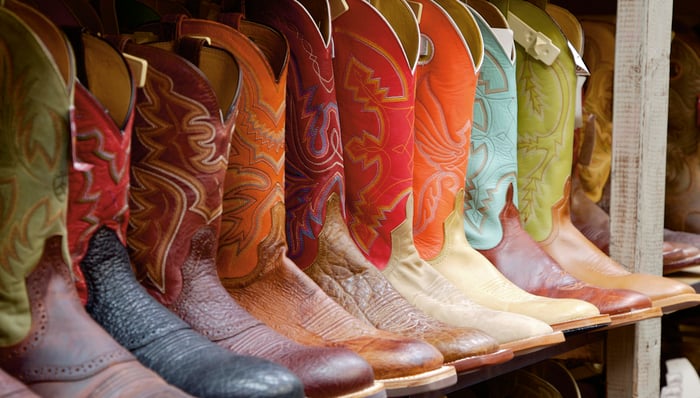 The timing of this news was no coincidence, as Boot Barn is set to present at the 2019 ICR Conference in Orlando Florida later today. But the company is right to tout its relative outperformance.

Sales momentum in our retail stores continued as we have now reported seven consecutive quarters of same store sales growth in our stores. We also delivered double-digit growth in e-commerce sales with a healthy increase in margin. The team executed extremely well from a merchandising, marketing and operational perspective, driving strong top line and bottom line growth. While early, I am also quite pleased with current business and a solid start to our fiscal fourth quarter.

As it stands, Boot Barn is set to release its final third-quarter results and fourth-quarter outlook on Feb. 5, 2019. Given this encouraging update in the meantime, and with the stock trading nearly 40% below its 52-week high as of Friday's close, it's no surprise to see Boot Barn rebounding today.