Legend has it that only one Apple (NASDAQ:AAPL) employee ever stood up to Steve Jobs and won: Donna Dubinsky. Twilio (NYSE:TWLO) recently added Dubinsky, the mobile computing pioneer and Palm Computing co-founder, to its board of directors. She is also co-founder, board chair, and CEO of Numenta, a private company whose machine learning software is based on the principles of neuroscience.

Her credentials are unimpeachable, but it's the tussle with Jobs that adds "legend" to Dubinsky's resume. 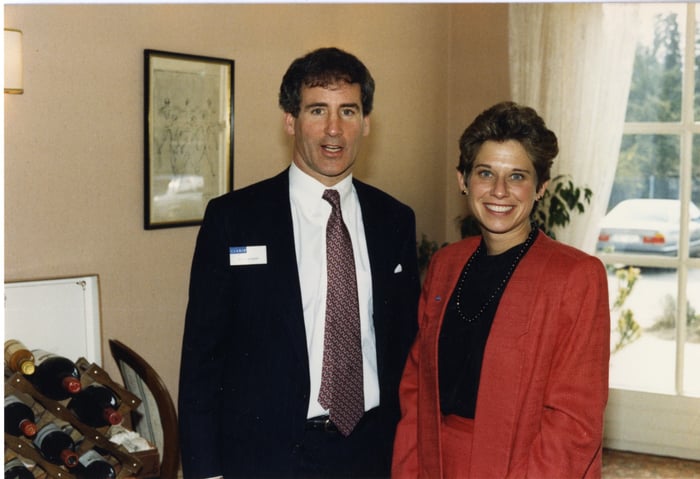 Former Apple board member Bill Campbell and Donna Dubinsky in the late 1980s, when both were part of Apple's Claris software division. Source: Donna Dubinsky on Medium.

Leaning in to defend the little guy

According to the story, Dubinsky, then a product manager, openly objected to Jobs' plan to deactivate Apple's computer distribution centers and instead go to a "just in time" manufacturing process where components would be assembled near the point of sale, forcing retailers to carry unassembled inventory.

Dubinsky argued that mom-and-pop retailers lacked the capital and capabilities to replicate a distribution network. Forcing them into the role would bankrupt most stores, obliterating Apple's sales pipeline. (There were no company-owned stores at that time.)

Jobs relented; Dubinsky got promoted. Amazing story, right? If only it were true. Here's how she put it in a statement to the website Business Insider:

I wish this was correct, but it isn't! Steve did not change his mind on distribution strategy -- I did not convince him. Actually, he left the company.

A history of innovation

Dubinsky earned her promotion at Apple just as she's earned everything in her career: with insight, effort, and innovative thinking. You'd be hard-pressed to find any tech executive who's better demonstrated a combination of all three over the course of a career spanning decades.

At Apple, she worked with Claris division CEO Bill Campbell -- later a board member for both Apple and Intuit (NASDAQ:INTU) -- before leaving in 1991 to start Palm with longtime business partner Jeff Hawkins. Together they helped bring the world the first successful personal digital assistant (PDA), the Palm Pilot. They later helped to pioneer the smartphone market at a second start-up, Handspring, introducing the Treo in 2002 -- five years before Jobs would show the world the first iPhone prototype. Recognizing the achievement, Palm's hardware division acquired Handspring in 2003.

In recent years, Harvard Business School honored Dubinsky with its alumni achievement award, its highest honor for graduating students. "In all her endeavors, Dubinsky has compiled an extraordinary record by introducing practical applications of cutting-edge technology into our daily lives," her Harvard profile reads. 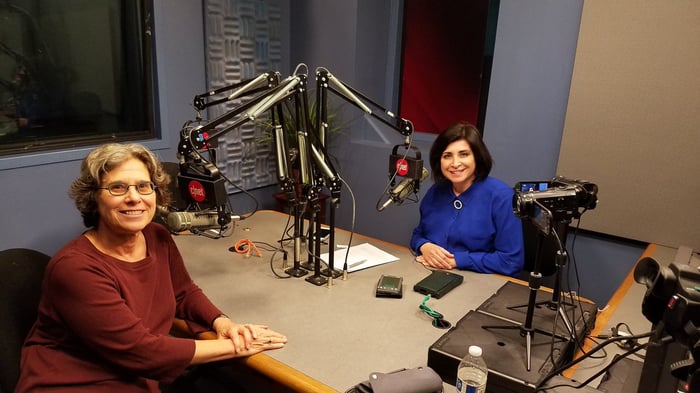 At Twilio, Dubinsky officially serves as a member of the audit committee. Unofficially, I suspect she's an important adviser to CEO and founder Jeff Lawson, who said in a press release announcing the appointment:

Donna's roots in the technology world are nearly unmatched. Not only was she one of the first technology leaders at the start of the smartphone boom, Donna has built career leading organizations that fearlessly disrupt markets through innovation. We are thrilled to have her join the Twilio board as we work to transform the communications industry from its legacy in hardware to its future in software.

What makes her choice particularly interesting to me as a Twilio follower and investor is Dubinsky's knowledge of brain science and mobile computing, and her long-term record of disrupting markets with breakthrough products. Twilio's long-term success as a company depends on disrupting the traditional telecom hierarchy and putting more power into the hands of software developers, especially those working on apps for mobile devices. History shows that Dubinsky excels at disruption and at working with bright engineers.

She and Hawkins are also working on machine learning technology that could reshape how computers help us sort through data and make decisions. Understanding how the brain processes communications -- and putting that knowledge to work in future Twilio products -- could prove to be especially fruitful.

Regardless of whether we reach that point or not, Dubinsky's appointment is brilliant and a win for Twilio investors. I expect her voice will be heard and her sage advice will be acted upon.