Please ensure Javascript is enabled for purposes of website accessibility
Free Article Join Over 1 Million Premium Members And Get More In-Depth Stock Guidance and Research
By Jeremy Bowman - Updated Apr 20, 2019 at 12:20AM

Shares of the meal-kit service dove today on a correction after Tuesday's jump.

Shares of Blue Apron ( APRN -3.07% ) were sliding today though there was no direct news driving the stock lower. What seemed to prompt the sell-off was increasing concerns about the company's financial position, even after it said it would turn a profit on an adjusted EBITDA basis in the first quarter of this year and for the full year. The stock was trading flat this morning but then suddenly plunged after an article in InvestorPlace listed it as one of seven stocks that could go bankrupt this year.

That possibility seemed to rattle investors and sparked a correction just two days after the stock surged nearly 50% on updated guidance calling for adjusted EBITDA profits. Today, the stock closed down 10.5% after falling as much as 16.1% earlier in the session. 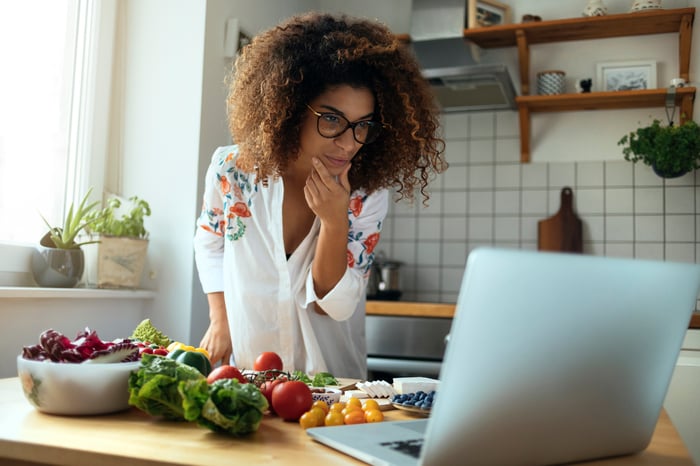 Writing in InvestorPlace, Bret Kenwell argued that Blue Apron was facing too much competition and its margins are too low for the company to survive over the long term. Beyond that, there are other reasons to question Blue Apron's ability to bounce back and explain why the stock deserved a correction after Tuesday's surge.

As my colleague Tim Green argued, using adjusted EBITDA as a measure of profitability significantly manipulates the company's underlying numbers and performance and may even push management to focus on the wrong goals, such as an over reliance on share-based compensation since that doesn't subtract from adjusted EBITDA.

While the company's guidance is clearly a good sign as are the better-than-expected results from its new partnership with WW, formerly known as Weight Watchers, it's still an open question of whether Blue Apron can be successful over the long term. Customers are fleeing the service, as revenue has plunged in 2018.

Part of new CEO Brad Dickerson's focus on adjusted EBITDA dovetails with his decision to build the business around the company's best customers, meaning revenue could continue to decline this year as the company spends less to acquire new customers. That's a bad sign, as even a profitable company with sliding revenue is only going to warrant a very low valuation. Given that, the stock's volatility will continue as investors debate the company's turnaround potential.