After the stock essentially tripled over a two-year period during 2016-2017, shares have fallen off a cliff in recent months, giving up nearly 50% since the beginning of November. First, the children's apparel retailer slid after announcing the sudden departure of two top executives,  and then weak third-quarter reports from its larger peers pushed it lower. In December, the stock plunged on its own third-quarter earnings report as management slashed full-year guidance in spite of a strong third quarter, though there was a good reason for the cut, as I'll explain. Finally, the stock just hit another low on news that rival Gymboree will close all of its 900 stores, meaning upcoming liquidation sales are likely to pressure Children's Place's performance in the near term.

I opened a small position in Children's Place after the December earnings report and added to it earlier this week on the Gymboree news. Here's why. 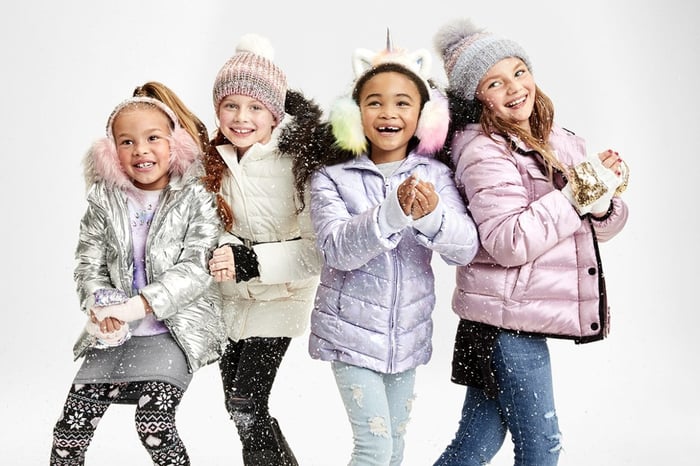 A cut in earnings guidance is almost never a good thing, but there are exceptions. Management trimmed its full-year fiscal 2018 earnings per share forecast from a range of $8.09-$8.29 to $7.69-$7.79, which compares with EPS of $7.91 in fiscal 2017. However, a closer look at the details shows that the guidance cut is due to two things that are actually long-term positives for the company.

CEO Jane Elfers explained, "Due to stronger than anticipated digital demand in the back-half of 2018, we were forced to accelerate online access to our brick-and-mortar inventory and our ship-from-store fulfillment capabilities, resulting in an anticipated incremental fulfillment cost of $5 million, or $0.24 in EPS in Q4." In other words, the reduced profit expectations are the result of high demand that the company is making an effort to meet, which is a good problem to have, as the increased costs are a short-term issue, but increased demand represents an opportunity for long-term customer acquisition.

More importantly, the company spies a unique opportunity to grab market share, as the Gymboree liquidation puts about $1 billion of revenue in children's apparel retail up for grabs, and the collapse of Sears, Kmart, and Bon-Ton Stores has also made considerable market share available, given that management estimated in its recent earnings call that the trio generated between $425 million and $475 million in children's apparel revenue over the past year.  Again, Elfers explained that there would be a near-term impact, saying, "Given recent competitor news, our updated outlook also assumes the sales and margin impact of potentially significant liquidation events."

Still, the bankruptcy of Gymboree, Sears Holdings, and Bon-Ton is unquestionably good news for Children's Place. The retailer is targeting a market share opportunity of at least $100 million from the Gymboree bankruptcy and should get another chunk of sales from Sears, Kmart, and Bon-Ton, as Children's Place is co-located with more than one third of Sears Holdings' stores. That means Children's Place's annual revenue of about $2 billion could easily get a bump of 5% to 10%, if not more, if it takes advantage of its rivals' bankruptcies.

Based on its updated EPS guidance, Children's Place is now trading at a P/E of just 11, and management has been kind to shareholders. The stock offers a dividend yield of 2.3%, and the payout has risen every year since the dividend was initiated in 2014. The company has also been aggressively buying back stock, its share count having fallen by 9% over the past year. Given the recent sell-off in the stock, the company is likely to accelerate buybacks, which will help push earnings per share higher over the long term.

Despite the stock's recent woes, Children's Place remains one of the best-performing brick-and-mortar retailers on the market, with comparable sales jumping 9.5% in its most recent quarter, and it's built a strong e-commerce business, with 29% of sales coming from the online channel in its most recent quarter, quelling any concerns about vulnerabilities to e-commerce competitors.

The share price looks like a steal after the recent sell-off, and the company should have a long-term growth opportunity ahead of it with the bankruptcy of Gymboree and other competitors, even if its short-term results may be lumpy.

Wall Street is famous for being overly focused on the short term, and this looks like a great opportunity to take advantage of that nearsightedness.