You might be surprised to learn that several already do.

When Apple (AAPL -2.12%) released its latest Apple Watch last year, it came with plenty of upgrades. The display size increased by more than 30% and the case is smaller and thinner. The new speaker is 50% louder than its predecessor, and the phone has a speedier processor.  The device provides haptic feedback -- or tiny vibrations -- as notifications via the digital crown (the small button on the side). All this new technology provides something for almost everyone.

The new health features are the most groundbreaking. The Apple Watch Series 4 added electrodes to the digital crown and an electric heart rate monitor on the back of the watch  that allows users to test their heart rhythm in 30 seconds, and record an electrocardiogram (ECG) using the new ECG app. The device will alert users if it detects a potentially dangerous heart condition, and the ECG can be stored to share with doctors.

Now, Apple wants the blessing of some of the country's biggest health insurers, and some have already begun subsidizing the Apple Watch, which retails for $399, or $499 for the model that connects directly to cellular service. 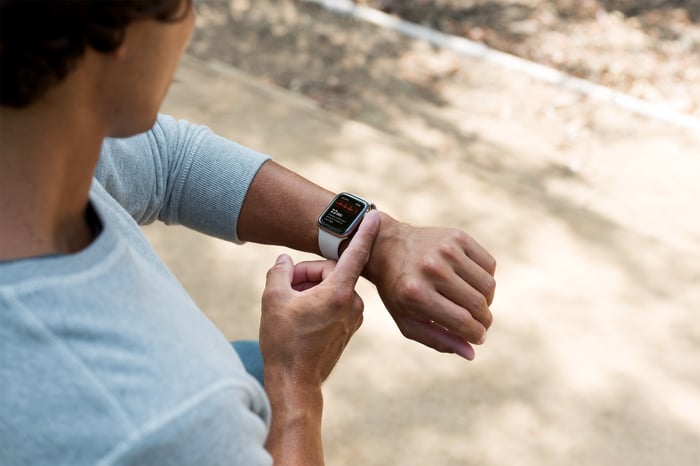 There are a growing number of health features on the Apple Watch. Image source: Apple.

Apple is said to be in talks with a number of private Medicare plans to subsidize the cost of the Apple Watch for people older than 65, according to a report by CNBC. Many big insurers provide Medicare Advantage plans -- which are run by private insurers that receive government payments for providing Medicare services to seniors. These plans have the latitude to approve devices like the Apple Watch if they can demonstrate a benefit to plan participants.

There's a pool of more than 19 million seniors who participate in these plans, providing a fertile field for Apple. It's important to note that while the Apple Watch is popular among younger customer, its health-related features show the company is actively targeting an older demographic as well.

The Apple Watch has a number of health-related features that make it ideal for an aging population.

The ECG feature on the watch can detect atrial fibrillation (AFib), a potentially life-threatening condition that causes an irregular rapid heart rate. This condition typically goes undiagnosed because the symptoms are explained by less-severe issues. Estimates vary, but anywhere from 2.7 million to 6.1 million people in the U.S. live with AFib, and many are unaware they have the condition. The disorder is much more prevalent among people over 65, and can result in blood clots, strokes, or heart failure.

Additionally, the next generation accelerometer (which measures acceleration) and gyroscope (which detects changes in orientation), combine to detect when the wearer has slipped, tripped, or fallen. By analyzing wrist trajectory and impact acceleration, the watch detects the fall and sends an alert to the wearer. If the notification isn't dismissed within 60 seconds, the device contacts emergency services and the user's emergency contact.

The Apple Watch would pay for itself if it prevented just one visit to the emergency room, giving insurers plenty of incentive to approve the device. 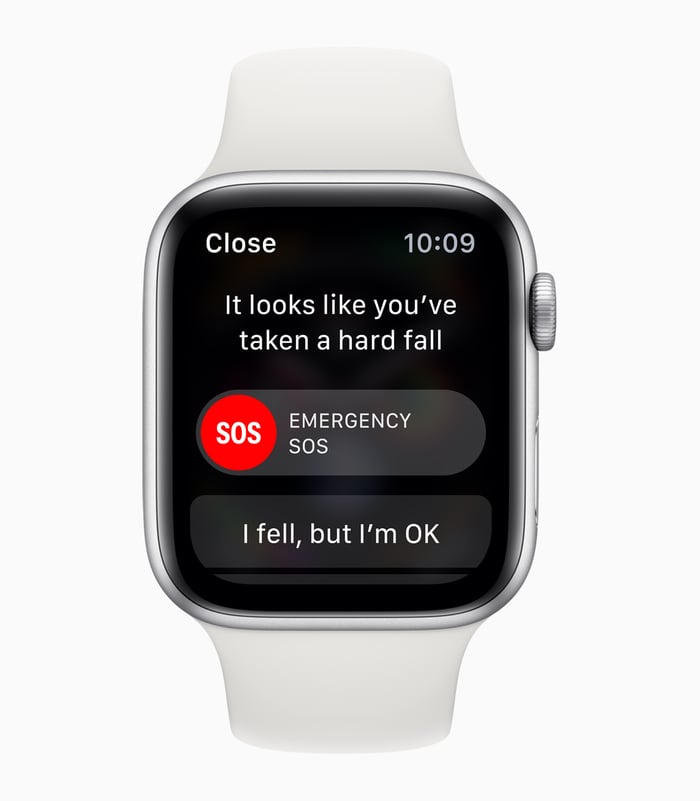 The latest Apple Watch can detect if a wearer has fallen. Image source: Apple.

Aetna Insurance, a division of CVS Health (CVS 0.47%), has already introduced an initiative that would make the Apple Watch available to a number of large employers and individual customers, making it the first major healthcare insurer to subsidize "a significant portion" of the cost of the Apple Watch. The company also provided the device to 50,000 of its own employees as part of its wellness program.

UnitedHealth Group (UNH -0.80%) went even further, making the Apple Watch part of its digital wellness program. This allows participants to receive the device after initially paying just tax and shipping costs; they can "earn" the device after meeting just six months of walking goals.

John Hancock Insurance, the U.S. subsidiary of Canada's Manulife Financial (MFC 0.74%), has a similar deal, which allows participants of its Vitality Program to acquire the Apple Watch for as little as $25. Customers earn points for regular exercise that can be used to defray the cost of the device, potentially getting it for free.

This growing number of insurers illustrates the value of the Apple Watch to both customers and the insurance industry. No other device has received FDA clearance for ECG capability, so there are effectively no devices that are direct competitors.

With the rising cost of healthcare, anything that helps keep premiums down is a win for insurers -- and patients. The growing list of health-related features on the Apple Watch makes it an ideal product to help customers track their health and fitness, and to help insurers lower costs.

It would also be a win for Apple, as the company faces the inevitable slowing of its flagship iPhone and is looking to other areas of its business to provide growth. The company has made no secret of its ambitions in the healthcare arena, and creating scenarios like this will ultimately help Apple achieve its goals.