In May 2018, McDermott International Inc. (NYSE:MDR) completed the purchase of Chicago Bridge & Iron. That move materially bulked up its scale in the energy industry, where it helps to build everything from upstream oil and gas drilling facilities to downstream processing plants. With energy-industry giants like ExxonMobil Corporation, among others, looking to increase capital spending in the years ahead, there's a lot of opportunity for McDermott to increase revenues. But there's more to understand if you want to know if McDermott International is worth buying today.

The first big issue that McDermott faces is making good on its purchase of Chicago Bridge & Iron. That all-stock deal was announced in late December 2017, and as is typical for the acquirer in these deals, McDermott's stock fell on the news. The company to be acquired, meanwhile, usually sees a price increase, but not this time. Chicago Bridge & Iron's stock also dropped on the acquisition news, suggesting that investors weren't exactly pleased with the deal. 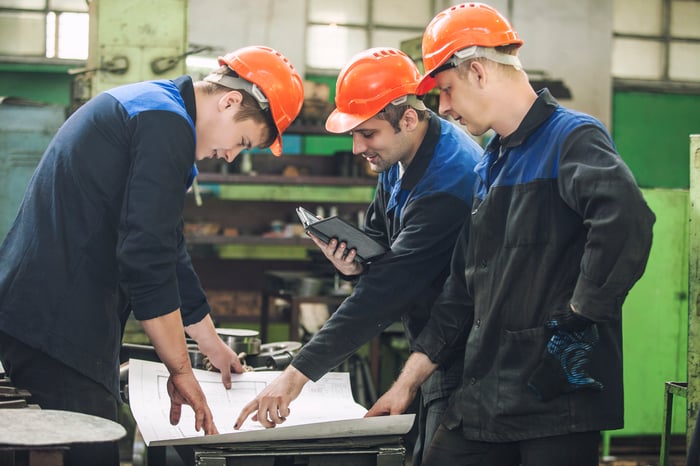 The merger was completed in May 2018 and McDermott has been working to make good on its projections for the deal. So far, the company has announced $319 million of annual cost savings, quickly getting pretty close to its $350 million goal. In fact, management is so confident at this point that it upped the savings target to $450 million.

Meanwhile, the company reports that bookings have remained strong. For example, McDermott signed more new contracts than were completed and rolled off in the third quarter. This suggests that the merger hasn't led to any customer issues and may, in fact, have strengthened McDermott's industry position. So while Chicago Bridge & Iron shareholders may not have liked the deal, the integration process appears to be going reasonably well.

That's good news and should position the company to benefit as oil and gas companies start to put more capital to work. Such an uptick is starting to show up following a severe investment pullback after oil's steep mid-2014 price declines. Oil prices are still volatile, of course, but prices have recovered from their lows and provided energy companies with more cash to invest.

Equally important, oil is a depleting asset so oil companies have to keep drilling if they want to maintain and grow production over time. Thus, McDermott's outlook has been, on the whole, brightening since the Chicago Bridge & Iron merger was announced.

A troubled past isn't behind it yet

That said, the company still has to deal with a little history. To that end, McDermott recently completed a strategic review of its business and announced plans to jettison its U.S. pipe-fabrication operation and storage-related businesses. That should help enhance overall profitability. Unfortunately, there's little the company can do about three big projects that came along with the Chicago Bridge & Iron deal that have been big money losers.

The Freeport, Cameron, and Calpine projects collectively led to a large one-time charge in the third quarter. McDermott has accrued nearly $200 million for expected losses across all three projects at this point. That's a pretty awful statement that suggests Chicago Bridge & Iron made a big mistake when it took on and priced these construction deals. While management says that there shouldn't be any more charges, investors don't seem quite as sanguine about the future here.

Worse, the last of the project deliverables won't be completed until mid-2020 if everything goes as currently planned. So McDermott will have to live under the shadow of these legacy projects for another 1 1/2 years or so. While the core business seems to be doing OK, that probably won't start to shine through until the risk of further bad news from the Freeport, Cameron, and Calpine projects is behind the company.

However, with three large and troubled projects added to the books following the Chicago Bridge & Iron merger, there's still a material overhang on the company's business. Since those projects are set to roll off over the next 1 1/2 years or so, it's probably best for investors to sit on the sidelines for a little longer before jumping aboard.