2018 marked another year in the long decline of soda, as volume sales of soft drinks have fallen every year in the U.S. since 2004. Today, annual sales are at lows not seen since the 1980s. Bottled water has surpassed soda in consumption, and a slew of other beverages have also taken market share, including coffee (bottled and brewed), iced tea, sports drinks, energy drinks, kombucha, and coconut water.

However, soda is still big business. Coke and Pepsi command a combined market cap above $350 billion for a reason. While final statistics on 2018 sales aren't out yet, using older data and trends from last year, we can deduce what the four top-selling sodas in the U.S. were in 2018. 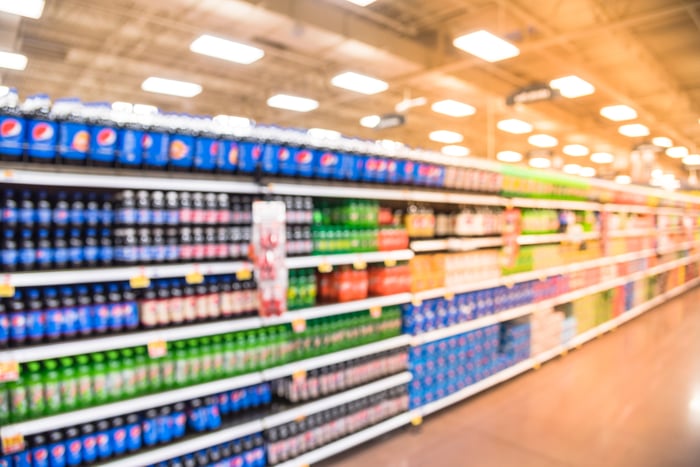 Coca-Cola has been the most popular soda brand in the U.S. and around the world for decades, and it continued its dominance last year. It's one of the most valuable brands in the world and has a nearly unmatched distribution network, a giant marketing budget, and partnerships with restaurant chains like McDonald's that make it the most entrenched soft drink brand in the U.S. and globally.

2018 was another strong year for Coca-Cola. Though the company doesn't break out sales by brand, it reported a 1% increase in unit case volume in North America in its most recently reported quarter. That growth was likely driven by noncarbonated beverages. But it provides further evidence that the decline in Coca-Cola consumption from previous years may have reversed, after volume sales increased 0.1% in 2017. The brand commands a market share of about 18% among sodas, and according to Nielsen, Coke dollar sales rose 2% last year.

For a few years, Diet Coke had supplanted Pepsi as the No. 2 soda in the country. But diet soda sales have plummeted due to health concerns about artificial flavoring and sweeteners, and as a result, Pepsi reclaimed the No. 2 spot in 2014 from Diet Coke. Since then, it has continued to put some distance between itself and Diet Coke as sales of diet sodas, including Diet Coke and Diet Pepsi, have fallen faster than naturally-sweetened sodas -- though that trend seemed to reverse last year.

Pepsi does not break out individual performance of its trademark brand. However, its North American beverages segment, which is the company's biggest category by revenue and also includes Gatorade and Mountain Dew, was challenged in 2018, reporting a 1% volume decline for the first three quarters.

To make matters worse for Pepsi, it recently lost the contract to serve thousands of Arby's restaurants, as Coke took its place.

Led by Diet Coke, diet soda made a comeback last year after falling sharply in prior years. Dollar sales for Diet Coke increased 4.6%, boosted by the brand's introduction of a new series of flavors at the beginning of 2018, including Ginger Lime, Feisty Cherry, Zesty Blood Orange, and Twisted Mango. Coke seems to be happy with the new flavors, as it just added two more, Strawberry Guava and Blueberry Acai.

The release of the new flavors in the first quarter of 2018 led Diet Coke to its first quarter of volume growth in North America since 2010. Coca-Cola Zero sales also grew 10.7% last year, showing that consumers seem to be embracing diet sodas again, at least under the Coke label.

Mountain Dew has commanded a market share between 6% and 7% over the last decade, which is enough to put it in fourth place. Acquired in 1964 by PepsiCo, it has since become one of the food-and-beverage giant's most valuable brands. Over the years, Mountain Dew has helped juice sales with a number of spinoff flavors, including Baja Blast, which it reintroduced last summer; Code Red; Kickstart, and others.

Pepsi has largely focused its advertising budget on healthier beverages as well as its Frito-Lay snack division, which may signal that its soft drink business will continue to stagnate. However, Mountain Dew's popularity in certain parts of the country may help it resist the decline in soda. Unlike Coke and Pepsi, its customers are much more concentrated, with sales highest in Appalachia and stronger in the South and the Midwest than on the coasts. Though it may surprise some readers to find Mountain Dew above Sprite, Diet Pepsi, and Dr Pepper, its popularity has been stable, and its fan base is devoted.