The answer: It's complicated.

A battle is brewing for big pharma.

Last year, several major pharmaceutical companies agreed to freeze price hikes on prescription drugs after coming under heavy pressure from the Trump administration. It didn't take very long for the freeze to thaw. At least 30 drugmakers plan to raise prices on some of their drugs in 2019.

Secretary of Health and Human Services (HHS) Alex Azar responded directly on Twitter, stating: "For those listening in the pharmaceutical industry: The list price increases must stop. Prices must start coming down." Democrats in the House of Representatives have also launched an investigation into price increases by drug companies. The war in Washington against drug price hikes is one of the few issues that unites both Democrats and Republicans.

In any war or battle, there are losers. But which big pharmaceutical stocks are most likely to lose in a war against drug price hikes? It's complicated. 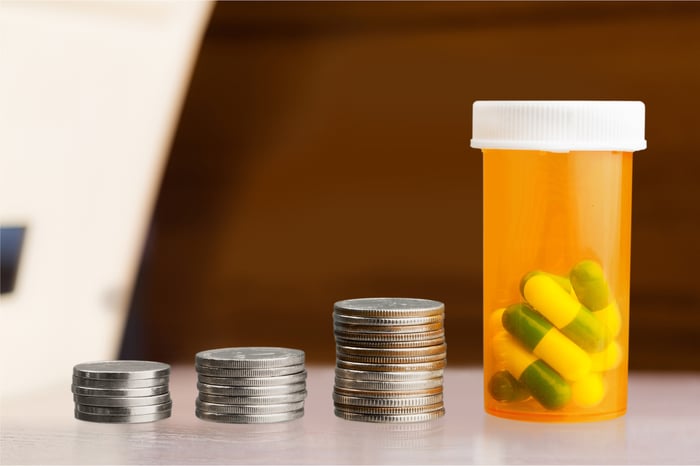 One key problem in determining which stocks could be at most risk if the federal government clamps down on price hikes is figuring out just how reliant specific companies are on price increases. Many drugmakers are increasing their prices. But they're not doing it on all of their drugs.

Investment firm Leerink conducted an analysis of drug prices that found the pharmaceutical companies most dependent on price increases to drive growth were Amgen, AstraZeneca, GlaxoSmithKline, and Pfizer (PFE 3.00%). But, again, there are some wrinkles.

Pfizer announced price increases for 41 of its drugs effective Jan. 15, 2019. The price hike on 37 of those 41 drugs will be 5%. The prices for three of the drugs will rise by 3%. One drug's price will increase by 9%. Pfizer attributed the bigger price hike to "the completion of two extensive development programs that have led to the recent FDA approvals of two new medical used that meet unmet patient needs."

Forty-one drugs might sound like a lot. However, Pfizer said that it's keeping prices stable for 90% of the drugs in its product lineup. But the important thing to note is that Pfizer stated that "the net effect on revenue growth in the U.S. in 2019 is expected to be zero."

It's a similar story with Allergan (AGN). The drugmaker increased prices on 51 drugs, including 27 with 9.9% price hikes. However, Allergan doesn't expect to realize any net benefit from these price increases.

How can that be the case? Both Allergan and Pfizer expect that the price increases will be offset by higher rebates and discounts paid to pharmacy benefits managers (PBMs). This underscores the complexity of the U.S. healthcare system, which in turn makes it more challenging to determine which pharma stocks are most likely to lose if restrictions are placed on drug price increases.

There will be big losers among drug stocks if politicians' words and threats turn into laws and regulations. But, as we've seen, you can't identify those losers by only looking at which companies have increased drug prices the most in the past. Those same companies could also be reducing prices on other drugs or giving rebates and discounts that offset the price hikes.

Instead, probably the best way to spot potential losers is to determine which drugmakers don't have a strong lineup of promising new drugs, high-growth new indications for existing drugs, or late-stage pipeline candidates to fuel growth. It's those companies that would be the most negatively impacted by restrictions on their ability to increase prices on existing drugs.

My view is that Amgen and Biogen (BIIB 0.26%) could be in the group of losers from a war on drug price hikes. Both biotechs are highly dependent on existing drugs that are no longer generating strong volume growth.

Even though Amgen has a promising new migraine drug Aimovig, the company's overall revenue depends more on older drugs like Enbrel and Neulasta. Amgen's late-stage pipeline isn't overly impressive, either, now that Aimovig has won approval.

Of course, most pharma stocks will be viewed as losers if tight restrictions on drug price hikes are implemented. Even if Amgen and Biogen feel the worst pain, they won't be alone. Wars tend to cause collateral damage.