The chipmaker could be taking advantage of supply constraints at its main rival.

Those chips aren't based on the same technology as its higher-end Ryzen Mobile parts. They use the company's relatively dated "Excavator" processor architecture and are built using an older 28-nanometer (nm) chip manufacturing technology. (AMD's latest Ryzen Mobile chips are crafted using GLOBALFOUNDRIES' 12-nm technology -- a souped-up variant of the latter's 14-nm technology -- both of which offer performance and power benefits over the older 28-nm technology, albeit likely at higher cost.) 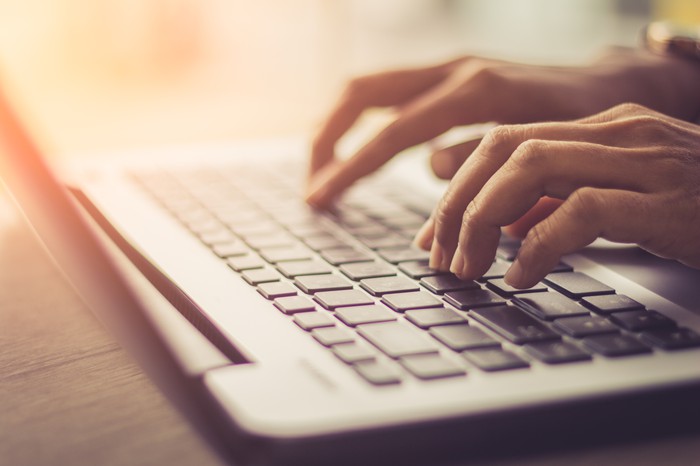 These products aren't particularly interesting for their technical prowess. Instead, AMD is looking to grow its share in the notebook PC market by expanding beyond Windows-based computers and offering products for low-cost Chromebooks, which run on Google's Chrome operating system.

Let's take a closer look at the opportunity here for AMD.

How big is the Chromebook chip market?

Let's suppose that Gartner's projection for 2018 turned out to be roughly correct. Gartner recently estimated that about 259.4 million PCs were shipped worldwide in 2018. This would suggest that Chromebooks made up about 4.6% of the PC market in 2018. (Do note that the total PC number includes both laptops and desktops, while Chrome-based systems have much greater share in notebooks than in desktops.)

Nevertheless, while Chromebooks do make up a non-trivial portion of the PC market, they're still very much in the minority.

It's also important to understand that Chrome-based systems are, in general, much cheaper than Windows-based PCs. Indeed, the low cost of Chromebooks is one of their key selling points. Lower-cost systems tend to use less-expensive components -- something that's evident in the fact that AMD is selling older, cheaper parts for the Chromebook market.

So, I'd characterize it like this: Chromebooks make up a small part of the overall PC market and the total revenue dollar opportunity in Chromebooks for chip makers is smaller than the unit shipment opportunity.

The potential market in Chromebooks isn't huge for AMD (or anyone else, for that matter), but it's large enough for the company to invest resources in it. Moreover, AMD didn't exactly go and build an all-new set of chips for this market -- it's merely repurposing chips that it already has and doing the work to support them on Chrome OS -- so the incremental investment associated with developing these products is likely very low. To the extent that it can gain share here, AMD stands to benefit from increased revenue and gross profit.

The timing of AMD's push into the Chromebook market is interesting, too. It has been well publicized that AMD's main CPU rival, Intel ( INTC 1.32% ), is capacity-constrained. Intel CFO and interim CEO Bob Swan even admitted on the company's last earnings call that Intel wouldn't be able to meet all of the demand that it expected for its products during the fourth quarter.

To that end, Swan indicated that Intel is focusing its manufacturing resources on its Xeon processors for data centers and its Core-branded processors (the higher-end parts in the company's portfolio) at the expense of low-end PC processors, as well as its Internet of Things group. This may be creating an opportunity for AMD to fill the demand for these lower-end systems -- Chromebooks included.

Indeed, DIGITIMES recently said that "[the] penetration of AMD processors in notebooks has been rising since the second half of 2018 due to the ongoing tight supply of Intel's chips." The report also went on to say that while the "top-4" PC vendors "have experienced much smaller influences from the shortages," smaller vendors "such as Acer and Asustek Computer" have apparently been more significantly shortchanged.

"As a result, the two Taiwan-based vendors' adoption of AMD-based solutions for their devices is much higher than that of the top-4 [PC vendors]," DIGITIMES said, citing "sources from the upstream supply chain."

It's not surprising, then, to see AMD launch chips targeted specifically at the Chromebook market in a bid to capitalize on Intel's supply constraints and, ultimately, boost its market share.