One of the ways that Apple (NASDAQ:AAPL) sought to reduce the cost structure of the iPhone XR relative to its pricier counterparts -- while also providing an additional marketing point for those pricier models -- was by giving the iPhone XR an inferior wireless antenna system. While both the iPhone XS and iPhone XS Max support gigabit LTE download speeds by way of a 4x4 MIMO antenna, the iPhone XR (which uses the same exact cellular modem chip as the XS and XS Max) is held back by a less-sophisticated 2x2 MIMO antenna.

That is set to change with this year's successor to the iPhone XR, according to an analyst at Barclays (via AppleInsider). The analyst reports that the second-generation iPhone XR will incorporate a 4x4 MIMO antenna system, dramatically boosting cellular performance. 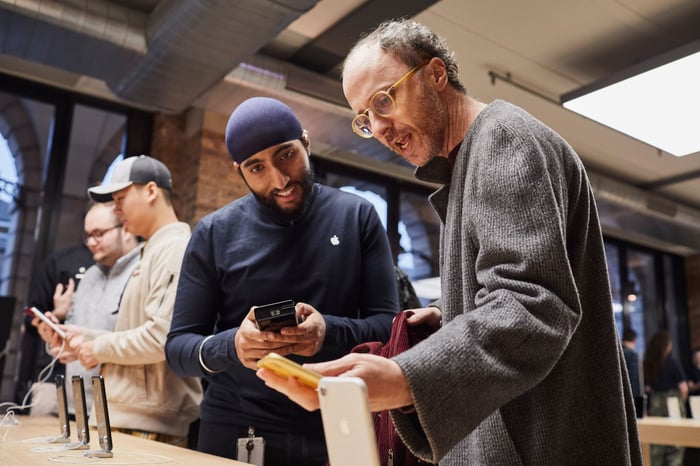 Here, I'd like to do two things: provide some additional evidence to support the analyst's claim and explain why Apple would abandon its prior segmentation strategy.

One of Apple's key wireless chip suppliers is Broadcom (NASDAQ:AVGO). While Broadcom doesn't supply Apple with cellular modem chips, it does provide Apple with Wi-Fi/Bluetooth combination chips as well as various radio frequency (RF) chips that are critical to a smartphone's wireless subsystems.

Broadcom actually lost some RF chip share in the iPhone XR, which was the result of Apple opting to reuse the same "platform" from the iPhone 8 series in the iPhone XR, as Broadcom CEO Hock Tan explained on the company's Sept. 6, 2018, earnings call.

"And when this happens, it does create an opportunity for a customer to temporarily use lower-performance alternatives in selected SKUs," Tan said. "With the benefit of hindsight, this may be precisely what happened with this 2018 generation."

At the time, Tan seemed optimistic that Apple would get back to upgrading the RF capabilities of its devices for the 2019 iPhones and that Broadcom was "well positioned to win back the platform."

On Broadcom's Dec. 6 earnings call, Tan said that the company is "confident" that it will, indeed, regain that share in the coming iPhone product cycle. This would seem to point to Apple endowing all of its upcoming iPhones with the best cellular capabilities that it can offer, necessitating Broadcom's cutting-edge RF chips.

Although it's clear from Broadcom's commentary that this doesn't represent a last-minute decision on Apple's part, I do think that if there were any ambivalence on Apple's part with respect to what direction to go, the relatively poor sales of the company's latest iPhone lineup would have relieved Apple of said ambivalence.

It's clear that, in addition to coping with a less-than-ideal smartphone market as well as macroeconomic headwinds, Apple's iPhone is simply losing ground in China to fierce competitors. If Apple wants to improve its competitive positioning in China, it likely needs to get more aggressive on the tech specs that it offers customers with products like the iPhone XR. (This may be driving Apple's reported decision to endow the iPhone XR's successor with a dual camera system instead of the single camera that the current model has.) Moreover, with many other smartphone makers planning to offer 5G-capable smartphones this year while Apple will not, the least it can do is to make sure that its latest iPhones all support the same LTE Advanced capabilities.

It will be a while before Apple releases these new iPhones and even longer before we have a good read on how they perform in the marketplace. But, at the very least, I think what Barclays had to say about the wireless capabilities of the iPhone XR's successor passes muster and is supported by both Broadcom's statements as well as basic business sense.