Heading into the fourth quarter, expectations for Halliburton's (NYSE:HAL) earnings were low. Several factors led to oil and gas producers putting the brakes on completing new wells and starting production toward the end of 2018. Due to its considerable presence in well completions and fracking, the assumption was that Halliburton's results were going to be dismal.

For all the doom and gloom, though, they weren't that bad. Sure, there was an expected drop in North American drilling activity, but it was able to find growth in other places to help soften the blow. So let's take a look at what happened this past quarter at Halliburton, what management expects for 2019, and what investors should take away from the whole situation. 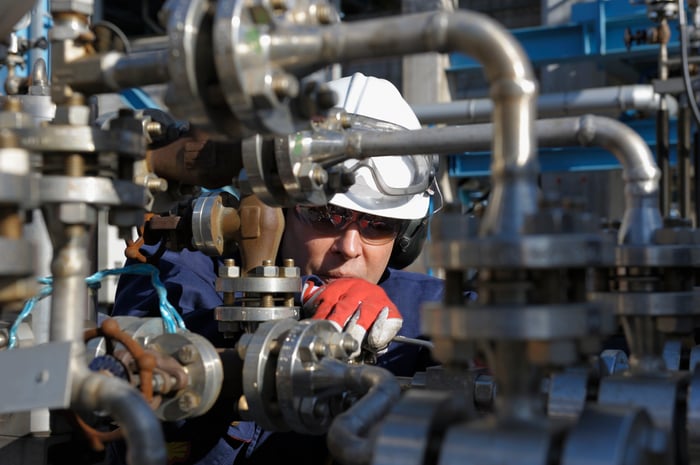 The number that jumps out the most in Halliburton's earnings is the incredible jump in earnings per share even though revenue and operating income were down compared to the prior quarter. Management says this was from a one-time tax benefit of $306 million related to a change in its corporate structure. Absent this gain, the company's adjusted earnings per share were $0.41.

These results were surprisingly good, though, considering the way management was talking at the end of the third quarter. Management said that it expected a considerable slowdown in activity in North America during the fourth quarter due to a combination of takeaway-capacity bottlenecks, producers exhausting their annual capital budgets earlier than anticipated, and lower oil prices. Granted, North American revenue declined by 11% compared to the prior quarter, but it was able to offset some of that with a 7% increase in international revenue thanks to year-end license renewals and product sales. 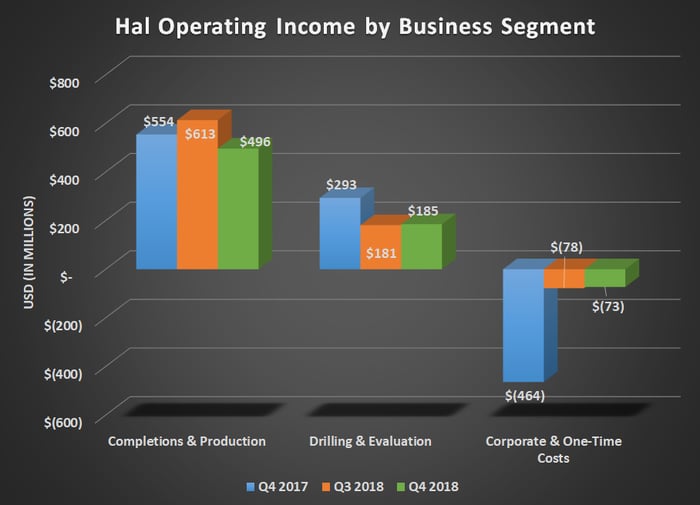 Even though the company's free cash flow was down this past quarter, management continued to repurchase about $200 million of its shares, and its dividend remained unchanged. Even after these things, though, the company had about $2 billion in cash on the books and was able to reduce its debt load by $445 million for the full year. Even though it may seem a bit risky to be repurchasing shares when business activity is pretty weak, the company appears to have plenty of financial leeway to do this without doing too much damage to its financials.

A lot has changed in the oil and gas industry over the past few years, and it has drastically altered the typical commodity cycle. On the company's conference call, CEO Jeff Miller discussed how shale has been a game changer and how those changes will likely play out in the coming years.

Today, our industry is going through a transformation brought on by the shale revolution and the recent down cycle. Because of that transformation, we're entering 2019 with a very different landscape, one that I think plays to Halliburton's strengths. First, North America is now the world's top oil producer and exerts considerable influence on commodity pricing. Second, the industry has cut a lot of costs out of the system and introduced significant efficiencies. And last but certainly not least, 2018 was a year of transition to a more disciplined free cash flow approach by many customers in the North American E&P industry.

As you know, many of our customers have shifted their strategy from production growth to operating within cash flow and generating returns. I believe this is good for the long-term prospects of our industry, this should make the industry investment cycle more rational and the commodity price volatility more range bound.

You can read a full transcript of Halliburton's conference call here. 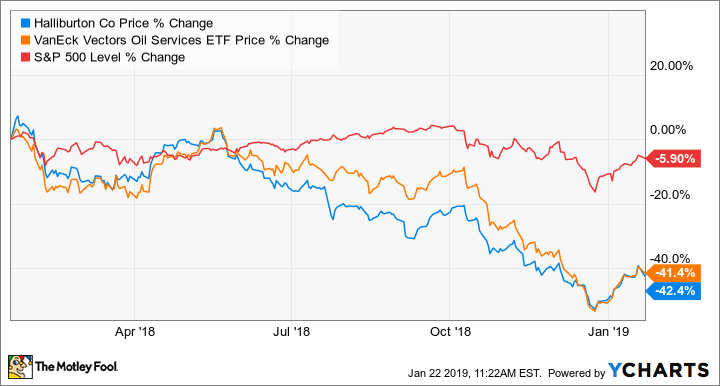 It's been a tough few years, but Halliburton is in good shape

There's no way to sugarcoat the fact that the past few years have been absolutely brutal for the oil services industry. Between lower oil prices putting a lid on major capital projects and the wild swings in drilling activity in shale, it has been difficult for businesses to find the right size that consistently generates returns. Halliburton has arguably done the best job in its peer group. It has a considerable presence in North American shale, but it focuses on delivering more technology-driven services on the higher end of the price spectrum. That position has translated into capturing the bulk of capital spending during this downturn without being too exposed to the commodity pricing of oil services.

It's hard to say where the industry is going to go from here, but it's pretty safe to say that shale will continue to be a big player in this business. That will be a huge benefit for Halliburton, as its business is more tied to shale's prospects than is that of the other major oil services providers. While we're likely to see another quarter or two of weak results until more takeaway capacity in North America gets built out, the longer-term trend looks promising for Halliburton.