Please ensure Javascript is enabled for purposes of website accessibility
Free Article Join Over 1 Million Premium Members And Get More In-Depth Stock Guidance and Research
By Ashraf Eassa - Updated Apr 22, 2019 at 11:51AM

One of Apple's ( AAPL -1.17% ) most important suppliers is contract chip manufacturer Taiwan Semiconductor Manufacturing Company ( TSM -1.95% ). Apple relies on TSMC to manufacture the A-series processors that power many of its products -- without TSMC (or another company like TSMC), Apple's chip design chops wouldn't manifest themselves in usable devices. TSMC also relies heavily on Apple as well, with the latter being one of the former's top customers.

Unfortunately for TSMC, its fate is ultimately tied to those of its customers, and Apple's current iPhone product cycle isn't progressing particularly smoothly. As you might recall, Apple dramatically ratcheted down its financial outlook back on Jan. 2 because sales of its iPhones were lower than expected. Not only does that mean lower revenue for TSMC, but the company's gross margin looks set to be affected as the utilization of its cutting-edge factories have dropped significantly -- something that's certainly due significantly to the Apple situation.

In light of all of this, it's not surprising that TSMC reportedly signaled its intention to try to renegotiate prices with suppliers of raw silicon wafers -- the wafers that TSMC applies its complex manufacturing processes to in order to produce salable chips for its customers. I'd like to go over why TSMC would do this, and, perhaps more importantly, why it's likely to succeed. 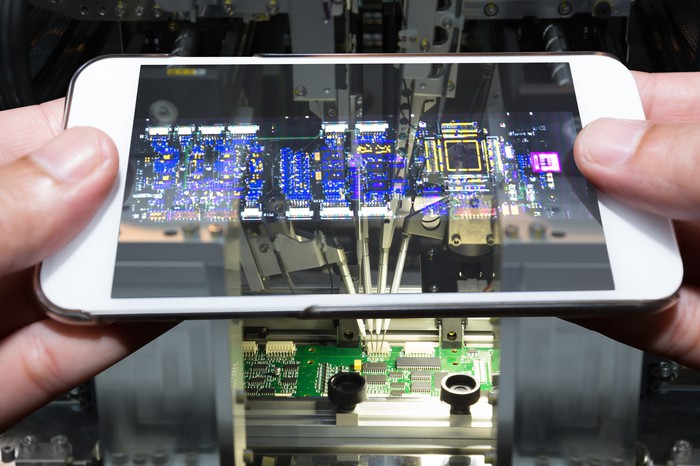 Until fairly recently, the semiconductor boom was in full swing, and demand for all kinds of semiconductor products -- including both logic (what TSMC produces) and memory -- was surging. Smartphone volumes were still strong, there was a surprise surge in chip demand for cryptocurrency mining, and demand for both DRAM and NAND flash -- both critical kinds of computer memory used in a wide variety of applications -- was extremely strong.

Things, however, have turned south. TSMC's outlook for 2019 is downright anemic, the cryptocurrency mining rush is over, and memory prices have fallen significantly as supply meaningfully outpaced demand. The semiconductor business, in aggregate, is clearly slowing down.

It's not surprising, then, that TSMC would -- perhaps in a bid to maximize its profitability in a relatively tough market -- try to pressure its own suppliers to cut prices.

Why TSMC should succeed

The odds seem good that TSMC will be able to obtain price concessions from the producers of raw silicon wafers. Why? In a booming market where both logic and memory semiconductor makers are cranking out a lot of chips to meet robust demand, the silicon wafer manufacturers have no incentive to cut pricing. In fact, TSMC indicated a while back that silicon wafer prices were on the rise -- something that it signaled to Wall Street would ding its gross margin profile.

However, with memory makers drastically scaling back their capital expenditure plans (indicating that they're not expecting demand levels to be as high as they'd previously thought) and with TSMC, too, bracing for anemic growth in 2019, overall demand for silicon wafers isn't likely to be what it was earlier on. That decreased demand might make those wafer suppliers more open to price concessions to allow their own customers to be a little more aggressive on pricing to try to stoke demand. (Although there is the risk that wafer makers' customers won't cut pricing as a result, and just pocket the savings entirely.)

The point, though, is that I think TSMC, and potentially others, should be successful in extracting price concessions from raw silicon wafer makers collectively. That's not going to be a game changer for TSMC by any stretch -- the company needs the underlying demand for its products to improve to ultimately deliver the kinds of revenue and profit growth that shareholders demand -- but when the going gets tough, every little bit helps.

3 Stocks That Could Be Worth $1 Trillion in 10 Years

Why Is Everyone Talking About TSMC Stock?