China's leading search engine was a laggard in 2018, and it's going nowhere so far this year. Winter may be coming, but we all know what comes a few months later.

One of China's original dot-com rock stars is having a hard time getting back into a good groove. Baidu (BIDU 5.02%) shares plummeted 32% last year. Many Chinese growth stocks are showing signs of life in 2019, but Baidu stock is essentially still where it was when the year began.

It's been a rough January for China's leading search engine provider. Things kicked off with Baidu CEO Robin Li warning about slowing growth. An analyst downgrade eventually followed. Even a bullish Wall Street pro put out a note detailing near-term negative catalysts, nipping any potential for Baidu to ride the wave of its fellow Chinese growth stocks higher. The stock hit a 35-month low earlier this month. Things appear to be bleak, but the one thing investors have learned in sizing up Baidu volatility over the years is that you can never count out the country's initial dot-com darling. 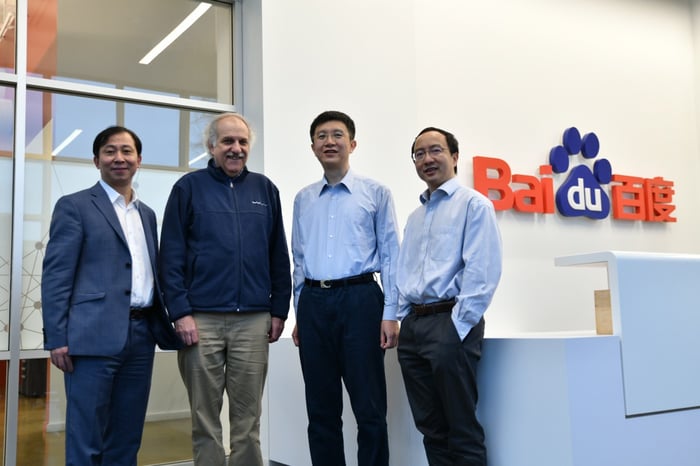 Baidu's founder-CEO sent a letter to employees three weeks ago, detailing past accomplishments and future challenges. Li notes that the economic slowdown is "as cold and real as winter" in China. He tries to put a positive spin on the setback -- arguing that it's giving Baidu time to cut costs, expand into higher-growth markets, and improve efficiency -- but the takeaway for investors is that growth will slow in the near term.

Morgan Stanley would go on to downgrade the stock a few days later. The firm warns that a new investment cycle will weigh on margins as growth rates for its paid-search cash cow start to moderate. Morgan Stanley lowered its rating to the neutral equal weight, slashing its price target on the shares from $230 to $188.

Citi analyst Alicia Yap chimed in late last week, sticking to her bullish rating on the stock but lowering her price target from $262 to $205. The new price goal still offers 28% of upside off of current levels, but she also has "Negative Catalyst Watch" on the stock through the next 30 days. She fears that the upcoming fourth-quarter report could come in soft, cuffed to weak guidance for the current quarter.

Baidu won't be immune to a slowdown in China. Advertisers will be spending less to reach consumers that will be curbing expenditures if recent measures to accelerate growth in the world's most populous nation fall short. However, it doesn't seem fair that Baidu is trading near its worst levels since early 2016.

There is still growth to be had at Baidu. Even if it falls short of its late-October goal calling for 20% to 26% in revenue growth adjusted for recent asset sales -- a real possibility given its cautious tone -- this is still an online pioneer that finds a way to eventually land on its feet. As rough as last year was, Baidu has beaten Wall Street profit targets by a double-digit-percentage margin in each of the past four quarters.

Baidu is cheap. Wall Street expectations continue to inch lower, but Baidu is still trading at a mere 15 times this new year's projected profit. If Baidu is trading at a forward earnings multiple in the mid-teens while it makes big investments in future technologies, one can only imagine how cheap the shares will be in retrospect when it's firing on all cylinders again.

Baidu will bounce back, as that is what the stock has historically done. We just may have to wait a few weeks before it truly bottoms out after a financial report that is now widely expected to disappoint.