Amazon.com (NASDAQ:AMZN) has been slowly building up its in-house delivery network in recent years, increasingly in-sourcing one of the most important aspects of its operations. After unveiling the first Prime Air (since redubbed Amazon Air) delivery plane in 2016, the company had started testing a service called Seller Flex in late 2017, allowing third-party merchants on Amazon to ship through Amazon's own delivery network as opposed to third-party shippers like FedEx (NYSE:FDX) or UPS (NYSE:UPS).

The e-commerce giant is now ramping up its assault on those shipping partners. 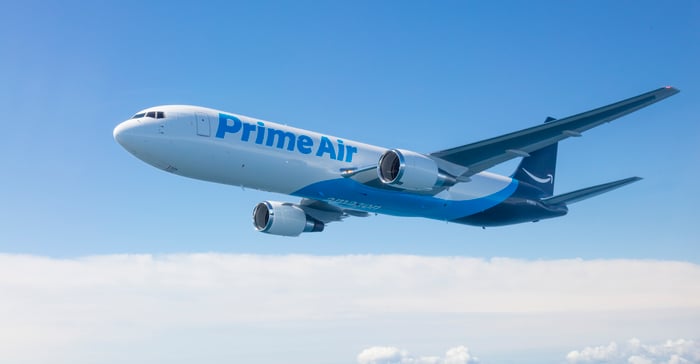 The Wall Street Journal (subscription required) reports that Amazon is actively trying to poach customers from FedEx and UPS, hoping to entice them with lower costs and other fees. By forgoing some of the fees -- which can oftentimes represent over 30% of the total shipping cost -- that other carriers charge, Amazon is characteristically looking to undercut the competition, potential losses be damned. A little bit of red ink in pursuit of growth has rarely deterred the e-commerce titan from pursuing disruptive ambitions.

The service is being rebranded as Amazon Shipping as it expands outside of its two initial test markets, London and Los Angeles. Amazon told WSJ that it is always looking to help "support the small and medium businesses who sell on Amazon, including testing shipping programs," suggesting that that the company isn't going after large merchants quite yet.

FedEx and UPS continue to downplay the competitive threat, although it could be misguided to dismiss a serial disrupter like Amazon. "We don't see [Amazon] as a peer competitor at this point in time," FedEx CEO Fred Smith said just last month. "For many reasons, we think it is doubtful that will be the case." Amazon represents about 3% of FedEx's total revenue.

Amazon expanded its partnership with Air Transport Services Group (NASDAQ:ATSG) in December, leasing an additional 10 Boeing 767s, while extended its leases for 20 of those same aircraft it was already using. That brings Amazon's total leased fleet to 50 aircraft. Of those, 30 are operated by ATSG (including via subsidiary ABX Air), while 20 are operated by Atlas Air.

Amazon continues to acquire ATSG warrants, signaling potential interest in acquiring the company at some point in the future. ATSG issued more warrants to Amazon as part of the recent deal, allowing Amazon to acquire to up 33% of the service provider. Amazon can secure even more warrants that would take its stake up to 40%, should it lease up to 17 more aircraft before January 2026. The warrants have an exercise price of $21.53 per share.

Growing revenue and cutting costs at the same time

This is another textbook example of a company that can grow a disruptive side-business that doesn't have to be profitable, threatening pure-play incumbents. But Amazon has even more strategic interest in vertical integration when it comes to shipping, as delivery logistics are so critical to its core operations. This isn't just about creating a new revenue stream; it's also about cutting costs and owning that part of the value chain.

Amazon doesn't disclose shipping revenue (a portion of Prime membership fees are allocated to shipping revenue) anymore, which used to give investors insight into the company's net shipping costs, but Morgan Stanley estimates annual cost savings associated with using Amazon Air at around $2 billion. The company is also at the mercy of future rate increases. Shipping costs for the first three quarters of 2018 jumped nearly 30% to a whopping $18.6 billion.

Building a delivery network will take an incredible amount of time and money, but Amazon has plenty of both.