There are a few ways to invest in it indirectly, too.

Technology is rapidly transforming entertainment. Video streaming, mobile gaming, and high-definition video have all made dramatic impacts on how people spend their time. Virtual reality (VR)may be the next big piece of tech to change entertainment. Although VR has enjoyed broad interest, the technology has yet to see broad consumer adoption. That could change in the years ahead, though.

Consider a full-immersion VR experience opening up locations in cities across the U.S., called The Void. The start-up is only a few years old, but interest in the new entertainment venue and backing from some notable investors could help propel VR into the mainstream.

The Void and the space it fills

The Void bridges the gap between arcade and theme park using VR. If you saw the movie Ready Player One, it's not too far off from that, albeit on a much smaller scale. Players suit up in a backpack-like vest and don one of The Void's proprietary VR helmets, which are powered by a lens made by VR headset maker Oculus. The getup is compatible with kids of all sizes -- even a six foot six manchild like me.

After some instruction from an attendant and an introductory video to your mission of choice, players are taken to a room and instructed to put on their goggles and adjust the volume on their headsets. Void staff make one last check to ensure the headsets are detecting their own movement and that of the other players. In my case, my team and I were disguised as stormtroopers from Star Wars -- all to scale according to our height, thanks to the sensor technology built in to the backpack and helmet.

What ensued was a fully immersive 3D mission to a volcanic world. Using the cameras and sensors embedded in the The Void's suits, players walk through elevators, platforms hovering above "lava," and rooms with interactive buttons and levers to open doors and advance through the game. Special effects such as vibrating floors, heaters, and rumbling help enhance the experience even more, giving the impression that the elevators are actually moving, explosions are going off nearby, and virtual opponents' blaster fire is landing hits. 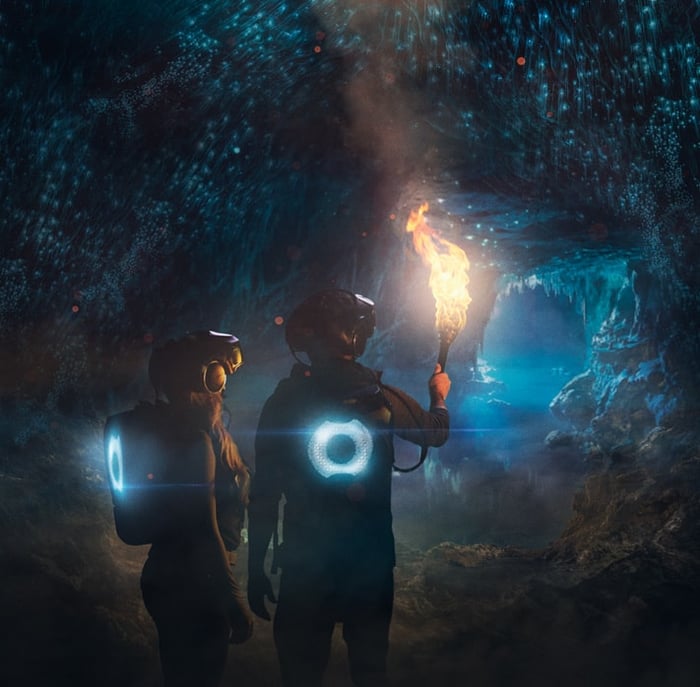 It's a unique experience that starts at about $30 per person. As noted at the outset, though, The Void has some notable support. Disney (DIS 3.69%) is an early backer of the company, providing financial support as well as the rights to its Star Wars and Wreck It Ralph properties.

The Void was founded just a few years ago, in 2015, but it's been popular enough that the company is exploring opportunities to expand its footprint. The company is advertising 11 opened locations -- including two in Canada, one in Malaysia, and one in Dubai -- and nine more on the way.

As a start-up, The Void is still a private concern and will probably remain that way for some time. However, there's a backdoor method to invest in the company. Disney holds an equity stake, so buying Disney stock gets you in on the concept. Granted, Disney is huge, so The Void isn't going to show up on business results anytime soon. Nevertheless, the entertainment empire is investing in similar immersive experiences at its theme parks, like rides at Star Wars: Galaxy's Edge opening in Southern California and Florida later this year. If The Void continues to have success, the tech that powers it could grow in importance for Disney, too.

Another way in is through Facebook (META 7.19%), which owns the VR headset maker Oculus. Neither Facebook nor its VR subsidiary is an investor, but they do provide the lenses for The Void's proprietary setup. Facebook gets 99% of its revenue from advertising, but if virtual reality goes mainstream, the company could be in a prime position to benefit.

It's still early days for VR entertainment.Global VR spending was estimated to be only $27 billion in 2018, but interest from consumers is expected to to grow at a 40% compound annual rate over the next five years. If that transpires, global spending on VR would surpass $200 billion by 2022, according to research firm PwC.

The Void could help further that cause as it introduces many people to VR for the first time. With locations set to nearly double in the immediate future, it's worth keeping an eye on The Void and the companies that support it in the years ahead.

Check out the latest Facebook and Disney earnings call transcripts.