As a strategic plan to lower operating expense kicks in, the sprawling railroad operator expressed optimism about revenue and margin growth in 2019.

Rail freight giant Union Pacific ( UNP 2.72% ) reported progress in its renewed effort to improve operational efficiency in its fourth-quarter 2018 earnings report. The company's filing, released Thursday before the markets opened, also revealed relatively healthy revenue expansion. Note that in the discussion that follows, all comparative numbers are presented against the prior-year quarter (the fourth quarter of 2017): 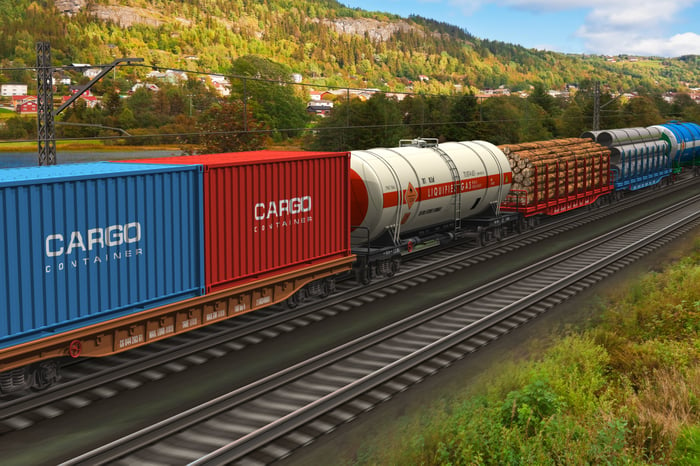 CEO Lance Fritz's comments in the company's earnings press release were markedly different than last quarter, in which he acknowledged that Union Pacific needed to make more tangible progress in improving productivity.

With a solid single percentage point in operating ratio improvement in hand against the comparable quarter, Fritz today promised an extension of the Unified Plan 2020, which has so far been implemented across roughly half of the company's geographical footprint:

We reported record earnings for the quarter driven by strong volume growth, core pricing gains, and regaining positive productivity momentum," said Lance Fritz, Union Pacific chairman, president and chief executive officer.  "Building on this progress, we are advancing the implementation schedule for Unified Plan 2020.  Since starting this initiative in October, we have improved on-time service for our customers while at the same time eliminating excess costs and improving the utilization of network resources.

Union Pacific typically refrains from issuing quantitative earnings guidance. However, management indicated in the earnings release that it believes the railroad will see positive volume and revenue growth this year.

Fritz also left shareholders with the expectation that a steadily improving operating ratio will benefit the bottom line in the coming quarters, when he said the following: "We expect operating margins will increase as a result of solid core pricing gains and significant productivity benefits from our G55 + 0 [productivity] initiatives, including Unified Plan 2020."