Union Pacific's (NYSE:UNP) new "Unified Plan 2020" calls for the implementation of precision scheduled railroading principles, which refers to a broader concept known more simply in the rail industry as "scheduled railroading." In its Sept. 17 press release describing its revamped operating plan, the company summed up the changes it will put in place as follows:

Union Pacific's management displayed an admirable sense of duty to stakeholders in initiating these steps, which are due to roll out in a phased manner beginning Oct. 1. Scheduled railroading has been implemented with much success in 2017 and 2018 by fellow rail giant CSX (NASDAQ:CSX). It's never easy to admit that a competitor's approach might be superior to one's current best practices, much less embrace the competitor's method. Scheduled railroading was originally evolved by railroad legend Hunter Harrison, who died unexpectedly in December of last year while implementing the system at CSX (though the work is being faithfully carried out by succeeding CEO Jim Foote).

Surprisingly, however, Union Pacific's management hasn't shifted its operational targets. The company has left its plan to achieve an operating ratio of 60% by 2020 -- with a long-term target of 55% or better -- unchanged. The operating ratio measures a railroad's efficiency, and it's found simply by dividing total operating expenses by total revenue during a period. Thus, the lower the reading, the better. Shareholders will remember that the 60% goal is itself a pared-down target: Originally Union Pacific had planned to reach the 60% level by 2019. 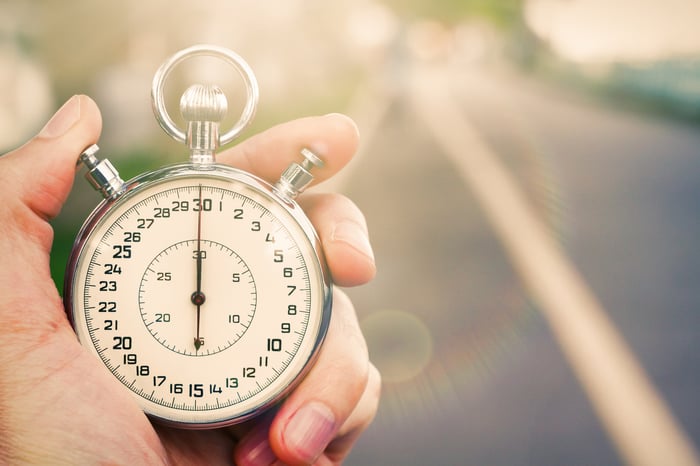 A rationale for proceeding slowly

There's an obvious reason that management hasn't lowered its targets yet. Significantly, the organization isn't implementing the scheduled railroad model as designed by Harrison at CSX and proven earlier at Canadian Pacific and Canadian National railroads.

In Harrison's system, while the principles outlined above figure prominently, the overall approach is one of rapid and draconian change. A hub-and-spoke architecture in various geographic regions is abandoned in favor of direct routes wherever feasible, sacrificing flexibility but gaining speed. Hump yards, which through their high elevation utilize gravity to sort rail cars, are retired as route complexity decreases. The railroad pushes through an immediate reduction of labor and puts unneeded track up for sale. Excess physical assets like locomotives are removed from service. And customers are trained to comply with the necessities of operating under a more disciplined schedule, often via rarely enforced penalties within contract agreements that address customer-induced delays.

Union Pacific, by contrast, has a reputation for balance in its operational approach. Management is reluctant to engage in aggressive employee reductions. It's also philosophically more inclined to add assets and invest resources in problems versus CSX's current reductionist approach.

However, the principles the company has chosen to employ should produce material results. Focusing on car movement versus train movement, and in turn watching metrics like car dwell time (where previously attention was centered squarely on reducing train dwell time), should help the company increase its productivity. And finding optimal ways to reduce crew and locomotive usage should yield progress versus a previous tendency to simply overresource bottlenecks, especially in the Southern region of the U.S., where the company has experienced congestion issues.

Finally, it's worth noting that Union Pacific's first phase of implementing selective scheduled railroad principles will occur over a sprawling but generally linear direction of track, its "eastern north/south corridor." The layout of this corridor connecting Wisconsin and Texas is extremely conducive to applying such principles versus more hub-like configurations that characterize company routes in the Midwest.

In sum, Union Pacific's plan should indeed improve overall earnings. Shareholders will likely see a fairly quick, if not huge, improvement in core operating metrics. But the greatest takeaway from the "Unified Plan 2020" could be the implicit admission that without significant process change, the company wasn't on track to hit its 60% operating ratio target in 2020.