The tech giant wants to change the world of robotics for the better. Here's what investors need to know.

When most people think of NVIDIA ( NVDA 2.20% ), their minds tend to focus on the company's cutting-edge graphics-chip processors (GPUs). But thanks to the ever-increasing computing power and efficiency of those GPUs, as well as NVIDIA's affinity for cutting-edge artificial intelligence (AI) solutions, the tech giant's reach naturally extends to the plethora of applications its flagship products enable.

To that end, NVIDIA recently opened its new AI Robotics Research Lab in Seattle. Its stated goal (emphasis mine): To "drive breakthrough robotics research to enable the next generation of robots that perform complex manipulation tasks to safely work alongside humans and transform industries such as manufacturing, logistics, healthcare, and more."

Robots already exist in each of those industries. But so far, they're largely restricted to repetitive tasks in tightly controlled environments -- and that's what NVIDIA hopes to change.

It all starts in the kitchen

The new lab currently has around a dozen research projects. But according to NVIDIA senior director of robotics research Dieter Fox, their work primarily revolves around making robots "that can naturally perform tasks alongside people."

Arguably their most compelling project to that end is a "kitchen manipulator" that -- just like it sounds -- uses AI and deep learning to find, track, and manipulate objects in the kitchen. 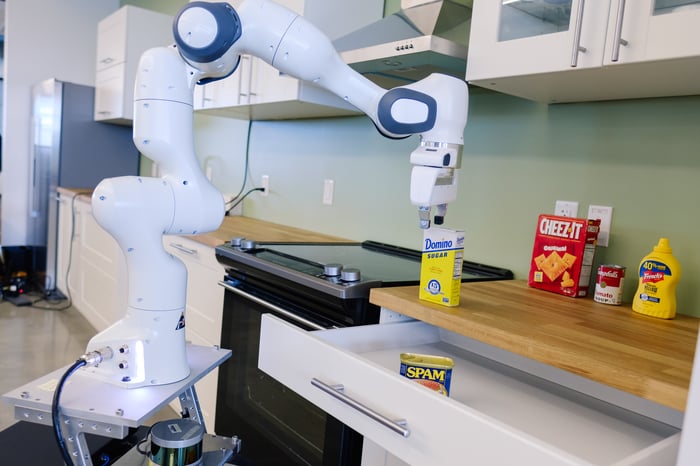 The capabilities of NVIDIA's kitchen bot still appear to be fairly limited. So far, the company has mostly showcased deceptively simple tasks like opening and closing drawers and tracking and placing items on the counter. But the kitchen is a perfect starting point to add layers of complication.

"Fox sees the kitchen as an ideal testing platform," NVIDIA wrote in a company blog post. "While it's a structured environment, it's easy to introduce new variables to the robot in the form of more complex tasks, such as dealing with unknown objects or assisting a person who is cooking a meal."

The end goal, Fox says, is to build "smart manipulators that can also operate in open-ended environments where not everything is designed specifically for them."

NVIDIA isn't the only company working to solve these kinds of problems. Take iRobot ( IRBT 0.85% ), for example, which has already sold tens of millions of its popular Roomba robotic vacuums. The latest Roombas are capable of mapping and "remembering" multiple floors in any given home and can even empty their own dirt bins for weeks at a time without human intervention.

And while iRobot's Roombas obviously don't have arms, iRobot has previously made it clear that a portion of their annual research and development investments are dedicated to advancing key technologies like object manipulation and navigation for future home robots. Most recently this past October, the company even formed a new partnership with Alphabet's Google centering around the integration of robotics and smart-home technology.

What investors should (and shouldn't) expect from NVIDIA

Make no mistake: NVIDIA is not planning to sell its kitchen robots in the near future.

Around the two-minute mark in this video on the project, NVIDIA research scientist Nathan Ratliff explains: "We're developing this system as a model of what other groups can use. We intend to share this with the broader research community so they can build their own research on top of it."

In other words, it seems more likely NVIDIA will use its research to foster the broader robotics industry and, in turn, bolster sales of the GPUs that make these innovations possible in the first place.

In these early stages, however, it's unclear when that could happen or what kind of incremental revenue opportunity that might represent.

Check out the latest NVIDIA and iRobot earnings call transcripts.