The latest Roomba remembers rooms and empties its own bin. Here's how it could help -- and hurt -- the home robotics specialist.

When iRobot (IRBT -4.85%) unveiled its first brushless, tangle-free Roomba models five years ago, I called them a massive leap forward in its quest to advance the robotic vacuum industry. After all, that key feature removed a primary pain point for consumers frustrated by the need to repeatedly clean their vacuums' brushes.

Then three years ago, the company followed with its smartest -- and most expensive -- bot yet, the $899 Roomba 980, marking its first vacuum to implement visual adaptive navigation technology with the help of a small camera built into the top. This made iRobot's Roombas capable of methodically mapping and cleaning even large, complicated floor plans in neat lines, even allowing the robot to return straight to its base to recharge in the middle of the cleaning cycle as needed.

A new era in robotic vacuums

This morning, however, iRobot introduced arguably its most significant advancements yet with the new Roomba i7+, a robotic vacuum that can empty its own dust bin and remember specific rooms by name. 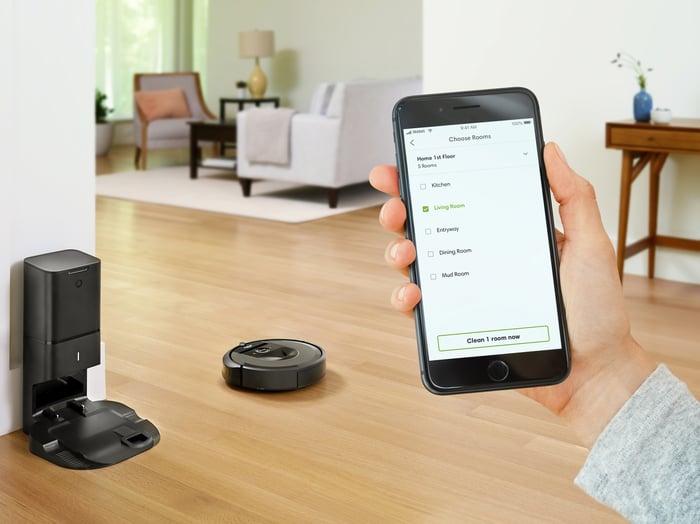 When the Roomba i7+ senses that its bin -- which is now larger and fully washable -- is full, it will return to its "Clean Base" dock to automatically empty the dirt and debris into a disposable bag stored within the unit. Then it can return to its cleaning duties, continuing to empty its bin and recharge as necessary until its job is finished.

The company will also be able to drum up some recurring revenue from the proprietary bags, which will retail at $15 for a pack of three. But it's worth noting that each bag can hold 30 bins of dirt, so shouldn't need to be replaced particularly often. More than anything, iRobot's primary goal here appears to be convenience and autonomy.

Or as iRobot puts it, this should mean "users don't have to think about vacuuming for weeks at a time."

If that weren't enough, the Roomba i7 series sports new mapping technology to "learn" and adapt to your floor plan, deciding how to best clean each room. It can also distinguish between rooms by name, giving users the option to send the Roomba to a clean a specific location using either iRobot's HOME app or voice control through an Alexa or Google Home smart device.

So why are iRobot shares down more than 8% today as of this writing? After all, however small, you'd think that Wall Street would be happy with the potential for more recurring sales (iRobot already offers disposable cleaning pads for its Braava jet floor-mopping bots). And with a price tag of $949, technically the Roomba i7+ with the Clean Base is iRobot's highest-priced Roomba system yet, which could be great for sales and margins assuming consumers reactive positively to the new tech.

But iRobot is also giving consumers two cheaper options. First, there's a $699 i7 model without the Clean Base dock for those who don't want the self-cleaning functionality (the dock can be purchased separately as well for $299). Second, iRobot simultaneously introduced a new entry-level Roomba e5 model featuring Alexa and Google Home integration for just $449.

To be fair, though, the pricing issue shouldn't be a big surprise considering iRobot CEO Colin Angle promised during their second-quarter call in July that these new products were on the way, teasing that they would include the company's "next offering of high end innovation at lower price points."

Then again, iRobot stock did pop more than 40% last month on the heels of that report, and in anticipation of this launch. So more than likely today's drop is simply the product of some investors selling the news and taking profits off the table.

In these early stages, however, and as a longtime iRobot shareholder myself, I'm not interested in selling my shares anytime soon. Remember, earlier this year Angle also asserted that, in the next few years, "the true winners in the consumer robot industry are going to be determined for the next decade."

As iRobot solidifies its market leadership by making robotic vacuums as seamless as possible, I think its recent gains are only the start of a longer-term trend.