A little over a month after launching the first-ever commercial autonomous ride-hailing service, Alphabet's (NASDAQ:GOOG) (NASDAQ:GOOGL) self-driving vehicle company, Waymo, said this week that it's setting up a new manufacturing facility to build some of its autonomous vehicles.

The company said in a blog post that the plant will be located in Michigan and that it will be the first of its kind to build vehicles capable of Level 4 autonomy, in which the car drives itself, but with limits on where. "This will be the world's first factory 100%-dedicated to the mass production of L4 autonomous vehicles," the company said.

Waymo will work with Magna International, an automotive supplier and design and assembly company, to build the self-driving vehicles, which will include the Jaguar I-Pace and the Chrysler Pacifica Hybrid minivan. You may recall that Waymo struck deals last year with both Jaguar and Land Rover to buy up to 20,000 I-Paces and 62,000 Chrysler Pacificas. 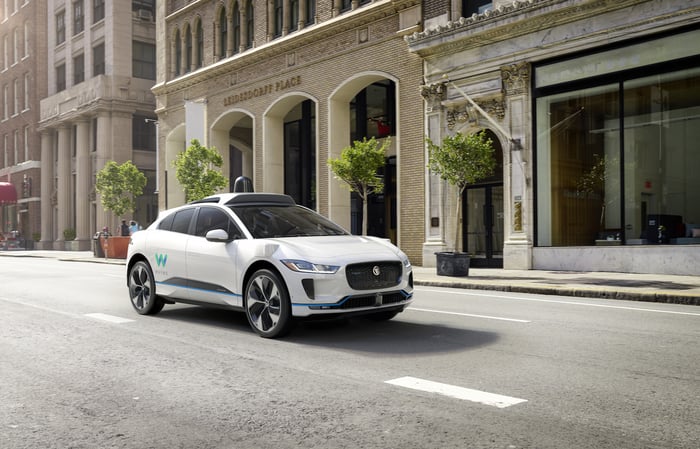 The new factory won't produce all of the aforementioned vehicles, but it will allow Waymo to easily build some of the vehicles and integrate its self-driving hardware and software at the same time. Right now, Waymo outfits its vehicles with its own tech after the vehicles are produced.

Waymo is putting up $13.6 million for the project and received an $8 million grant from the Michigan Economic Development Corporation. Waymo hopes to open the plant this year and said the factory will create "hundreds of local jobs" over the next few years.

Why is this factory announcement a big deal for Waymo? Because it's another clear indication that the company's commercial self-driving plans are more than just a side project.

Investors should see this move as another significant step toward profiting from autonomous vehicles. Here's what the company said about the factory in its blog post: "As we begin to commercialize our business and vehicle supply grows, we're laying the foundation for a scalable, robust vehicle integration plan, starting in Michigan."

We're getting started on the world's first factory that is 100%-dedicated to the mass production of L4 autonomous vehicles, creating hundreds of jobs in Michigan. @MEDC #PureMichigan https://t.co/dWuRyjfYtp

There's still a long way to go before we see Waymo's autonomous vehicle services across the country, but the company setting up its own factory certainly shows that it's serious about making its self-driving services a viable business. Expanding the existing Waymo One service and rolling it out in additional cities was always part of the company's plan, and this factory will help make the company's goals a reality.

Some analysts value Waymo's business at $175 billion in the coming years. For the company to reach that potential, it'll need to expand far beyond its small footprint (it currently only operates its Waymo One service in the Phoenix area). This recent move should help the company do that, but investors should know that there's still a long road ahead.

The company wants to eventually make money from its autonomous ride-hailing service, as well as license its technology to automakers. But it could take years before Waymo is contributing meaningfully to Alphabet's top or bottom lines. The new factory is a way for Waymo to further lay the foundation for its driverless vehicle future -- just remember that it will be years before the company's investments like these pay off.