The two companies have headed in opposite directions in recent years. Should investors stick to the safe option or take a chance on potentially bigger returns with a turnaround play?

Walt Disney (DIS 0.43%) and top toy maker Mattel (MAT -0.29%) both have strong consumer brands, but the future of the House of Mouse looks more certain compared to the outlook for the maker of Hot Wheels.

Mattel is now trying to turn itself around after years of declining sales as the company failed to keep up with shifting consumer behavior. Meanwhile, Disney's brand is as strong as ever with an impressive run of box office success that has boosted traffic to the company's theme parks. Let's take an in-depth look to find out which is the better buy for investors today.

Both companies carry more debt than cash on their balance sheets. But Disney generates nearly $10 billion annually in free cash flow, while Mattel is trying to claw its way back to sustained profitability. Disney can cover the interest on its debt 26.9 times out of its operating income, but Mattel is presently fighting for survival as it doesn't have enough profit to service its debt burden.

What's clear is that Mattel is very vulnerable to a sudden downturn in the economy. A severe recession and slowdown in consumer spending would likely dash the company's turnaround hopes.

Because Mattel is currently unprofitable, valuation metrics are useless in evaluating the stock. Mattel is in full-blown turnaround mode, which involves a lot of uncertainty about the company's future. The company squeezed out a small profit of $0.18 per share in the last quarter, but analysts expect it to lose $0.16 per share for the holiday quarter.

For 2019, analysts expect the company to report $0.05 per share in earnings, which gives the stock a high forward price-to-earnings ratio of 242. It's clear analysts expect Mattel to be successful in its turnaround efforts as they estimate earnings will grow 10% per year over the next five years.

Here's how both stocks compare on a variety of valuation metrics (it's a very lopsided comparison):

Disney is an established entertainment juggernaut that churns out profits year after year and pays a dividend to shareholders. We'll get a clearer idea later this year how Mattel's profitability shapes up as management cuts costs as part of its turnaround strategy. But for now, Disney is better on value.

Disney's deep library of content, TV networks (ESPN, ABC), theme parks, and consumer products gives the company significant influence in the entertainment industry. The deal with Twenty-First Century Fox will only expand Disney's wide moat as it will have greater international reach and add to the talented ranks that oversee Disney's movie and TV productions.

The priority for the House of Mouse in 2019 is the launch of the new digital streaming service Disney+, which will give Disney more control over how it monetizes its movies without relying on third-party streaming services like Netflix. The company has a strong slate of movies releasing this year, which will eventually find their way onto Disney+ and help grow subscribers to the service.

On the other side, Mattel is one of the three leaders of the toy industry, along with Hasbro and LEGO. The global toy industry grew revenue from $78 billion in 2007 to $89 billion in 2016, so it's not a fast-growing industry. However, toy sales picked up sharply in 2018, which surprised analysts given the Toys R Us bankruptcy. In the U.S., toy sales increased 7% in the first half of 2018.

Despite a stronger environment for toy sales, Mattel has seen its market share decline over the last few years. This reflects a very fragmented industry with lots of different brands for parents to choose from. Strong sales tend to drift to the hot-selling toys of the moment, while everything else struggles to gain traction. For example, while Mattel's Barbie brand grew sales by 14% year over year in the third quarter, other top company brands like Fisher-Price and Thomas & Friends were down 12% year over year.

Overall, Mattel's total revenue has declined by 29% cumulatively over the last five years, significantly underperforming the rest of the industry. The company's stock price plummeted 72% over that time, as escalated operating costs wiped out profits. 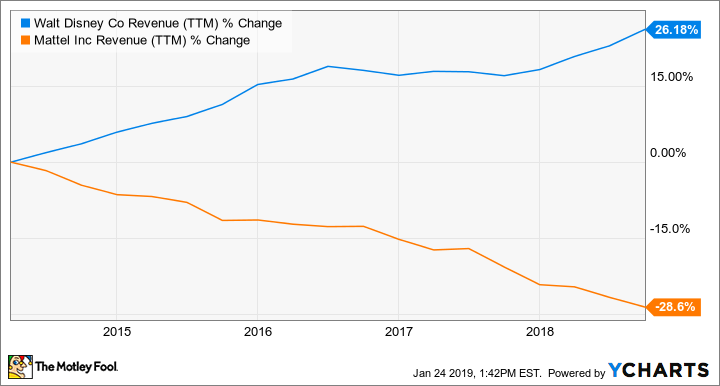 Current management has a turnaround plan, which involves cutting $650 million out of operating costs, optimizing the company's manufacturing footprint, and taking advantage of the company's intellectual property to invest in movies, digital gaming, live events, and consumer products. Hasbro has had a lot of success turning its biggest toy brands, including Transformers, into mainstream entertainment, so this could work for Mattel. With popular brands like Barbie and Hot Wheels, in addition to a broad library of hundreds of other brands, Mattel certainly has potential here.

Even though Mattel is struggling, I think its problems are fixable. The company has leading brands in the toy industry that give it a small moat. However, Disney has much more influence in the world of entertainment and has a much more profitable business. Ultimately, I think Disney is in a stronger competitive position than toy companies, given that toy makers are dependent on licensing some of their toys from the House of Mouse to generate revenue.

Disney is the better buy

While Mattel's stock price offers an opportunity to buy into one of the leading toy brands at what could prove to be bargain-bin prices, I think investors are better off siding with Disney. Sometimes turnarounds don't work, and other times they take longer to materialize.

Disney shares look attractive right now, as they trade for a modest valuation. I would hate to buy shares in Mattel only to see the company fail to achieve its goals, while missing out on a timely opportunity to invest in one of the most valuable brands in the world ahead of a pivotal year for Disney on multiple fronts.

No matter which way you slice this one, Disney is the better buy for investors today.

Check out the latest Disney and Mattel earnings call transcripts.