Ford's profits in China fell off a cliff during 2018. Here's the cold, hard truth, and what Ford plans to do going forward.

It was only a few years ago that one pillar of Ford Motor Company's (F 1.71%) bullish thesis was growth in China, the world's largest automotive market. It was supposed to emerge as a region boasting explosive growth to lessen the automaker's dependence on North America for financial success. China's auto market took a rare breather in 2018 with a 3% sales decline, its first full-year basis drop since 1990, but it still generated roughly 28 million unit sales to the U.S.'s 17.27 million units. Beyond its sheer volume, China's auto market will only increase in importance to global automakers as the country transitions into the hub for electric vehicle -- and perhaps driverless vehicle -- adoption; solving the country's congestion and pollution problem is a top priority. Unfortunately, Ford is failing in China. Is there hope it can turn things around?

Ford's fourth-quarter and full-year 2018 results make it clear just how poor the automaker's performance in China has been. Ford's Asia Pacific region, which is driven largely by China results, recorded a 12% decline for the full year driven by a 33% decline in wholesale volume. In China specifically, not the broader Asia-Pacific region, Ford's market share dropped 130 basis points from 4.2% down to 2.9%, and its 2017 $152 million pre-tax profit not only disappeared, it reversed to a $1.54 billion loss. China's $1.54 billion loss was partially offset by profits in the rest of Asia-Pacific, but if the graph below is worth a thousand words, not many say anything positive. 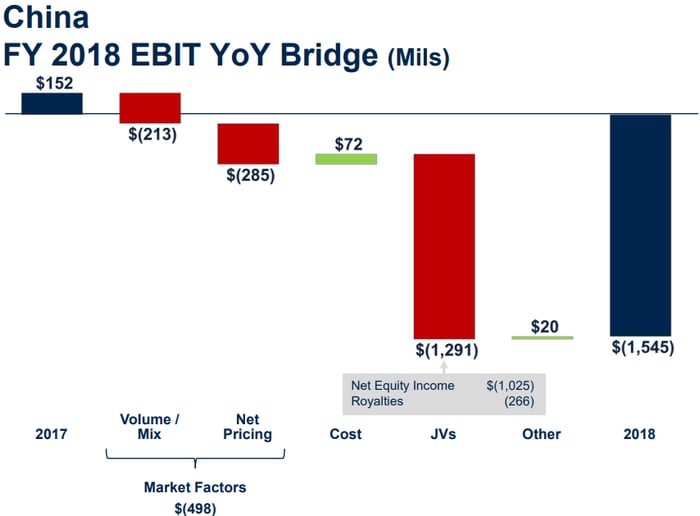 When you consider that Ford lost $2.18 billion total between its South America, Europe, Middle East & Africa, and Asia Pacific regions, China essentially accounts for 70% of Ford's automotive losses -- not exactly the second pillar of profits standing next to North America's earnings machine. Ford is failing in China, so what's next?

"China is absolutely essential to Ford globally. The management team fully understands the urgency and importance of transforming our business in China," said Anning Chen, Ford China president and CEO, in a press release. "We need to build a robust management team and efficient organizational structure."

Chen, who took over Ford's Asian operations in October 2018, has already established a new China Operational Committee that includes a number of leaders from within its China operations, and selected Joseph Liu as vice president, marketing and sales, Ford China, and acting president in place of departing Henry Li. Beyond its management shake-up, Ford's plan will focus on refreshing its lineup and improving operations. More specifically, Ford plans to roll out more than 50 new products in China by 2025, including the all-new Focus and new Escort, which have already made their way to dealerships. There's even a new SUV on the way that investors might have overlooked. 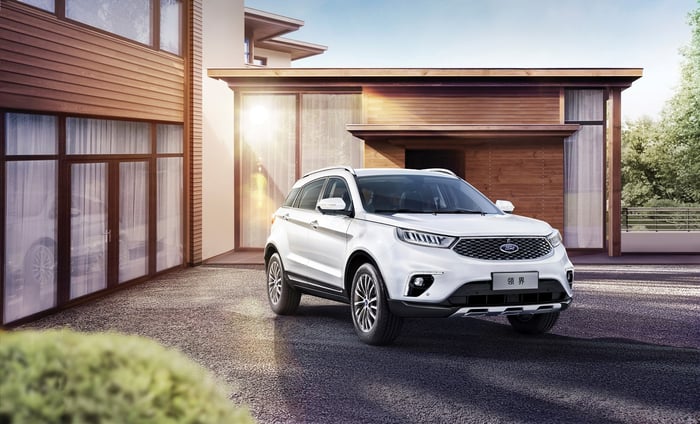 In fact, there will be 10 new product launches in 2019 alone, which should drive average transaction prices (ATPs) higher. Of those 50 new products to launch by 2025, eight will be all-new SUVs, and 15 will be electrified vehicles under both Ford and Lincoln brands. Simply put, new vehicles sell faster, with fatter price tags to boot, and Ford's lineup was older than the competition.

Going hand in hand with Ford's portfolio refresh will be the company's focus on improving its operations and cost cutting. Ford plans to increase local production and will add five vehicles to the list of products it builds in China. Avoiding import tariffs -- which is temporarily 15% from its typical 25% -- through local production is a bigger deal than people realize, especially for Ford's Lincoln brand, because its sales have grown rapidly and have all been imported. Ford also plans to streamline its network by distributing its two longtime joint venture products as a unified lineup.

History repeats itself. We hope

Ford has failed lately in China, that's clear. Now that Ford has a new plan ready to drive a turnaround in the region, investors hope that history repeats itself. If you're scratching your head, remember that Ford was arguably a decade or more late to entering the Chinese market and is far from matching sales with cross-town rival General Motors, which outsold Ford by almost 3 million units in China in 2018. But then Ford refocused on China in 2012 and introduced a slew of new models, more than tripling its sales in China from 2012 to 2015 before losing momentum in recent years.

Ford needs to succeed in China as it's the world's largest automotive market -- and a market that will be increasingly important to global automakers hoping to thrive as electric fleets and driverless vehicles slowly become adopted. Ford is failing in China, but if history repeats itself, the company's turnaround in the region could gain traction sooner, rather than later.