Tech stocks might be volatile, but you can count on these tech companies' dividends.

For many tech investors, dividends are almost an afterthought. If you're out looking for the next big thing that'll multiply your money, getting paid a few percentage points of your investment each year might not be the most appealing prospect.

However, if you want to invest in more established tech companies for the long haul and would like to get paid a dividend while you wait for those shares to appreciate, you may want to take a look at these three stocks. 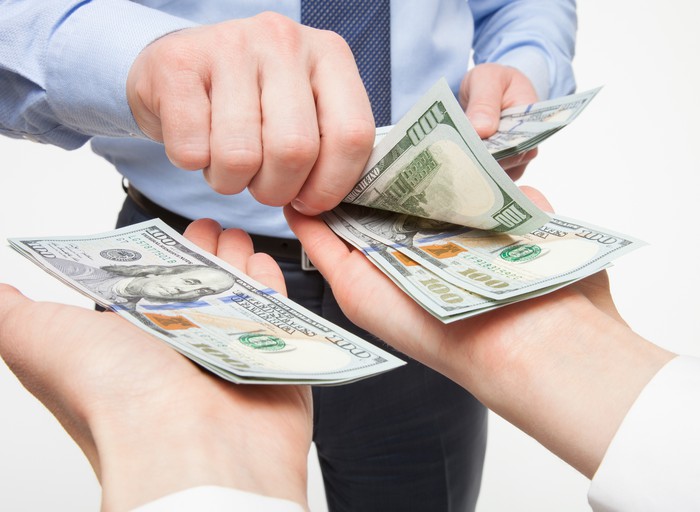 One of the world's biggest and most successful video game publishers is Activision Blizzard (ATVI 1.70%). The company owns many valuable franchises, including Call of Duty, World of Warcraft, and, by way of its acquisition of King.com in February 2016, Candy Crush.

The company's stock has tumbled since the company posted worse-than-expected earnings results in November. However, Fool.com colleague John Ballard recently highlighted a number of compelling growth opportunities for the video game publisher, such as the company's work to grab a slice of China's $15 billion mobile video game opportunity, as well as its increasingly crafty ways to monetize games. John therefore argues that Activision Blizzard's stock decline "could represent a tangible buying opportunity."

I agree, and as a bonus, the company offers investors a modest dividend yield of 0.71% while they wait for a rebound. It's also worth noting that while the company hasn't had a dividend for long, having paid its first annual dividend in 2010, it has consistently raised its dividend each year. 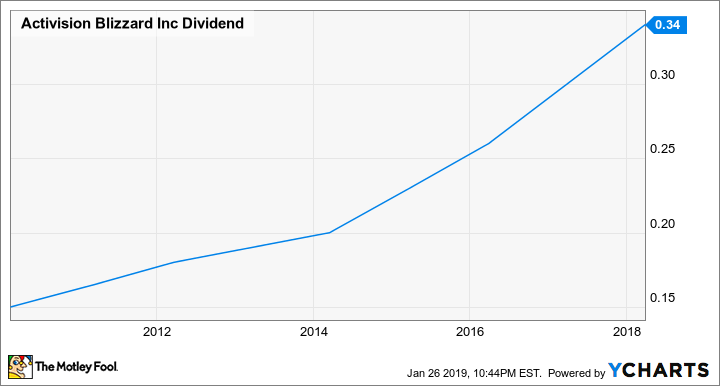 One chip stock that's been on fire lately is Xilinx (XLNX), which makes chips known as field-programmable gate arrays, or FPGAs. The company knocked it out of the park when it reported its earnings results on Jan. 23, issuing revenue guidance well ahead of analyst consensus.

Xilinx is also a cash-generating machine. Over the past 12 months, it has generated more than $3.30 per share in free cash flow, and it isn't shy about putting that cash into shareholders' pockets. The stock currently pays a quarterly dividend of $0.36 per share, translating into a respectable dividend yield of 1.62%. The company also has a good history of giving its shareholders annual dividend increases. 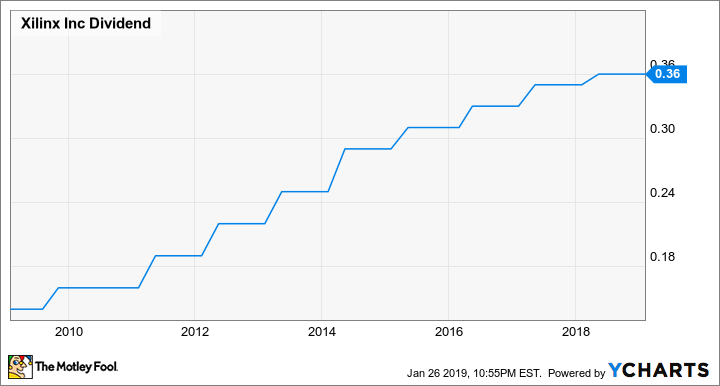 In addition to being a good dividend stock, Xilinx's growth opportunities look compelling. The company's FPGAs, for one thing, continue to gain traction. On the most recent earnings call, CEO Victor Peng said that for the company's system-on-a-chip products, "[we] are now engaged with over 300 unique customers in multiple end markets, which is more than triple the number we had just in the last quarter."

Peng added that the company is "seeing increased activity in design wins of our MPSoC [multiprocessor system-on-a-chip] in autonomous driving and other forms of automotive applications." These design wins, Peng said, "will drive revenue growth in more of the mid- to long term."

In addition to seeing a solid and growing dividend, analysts expect the company to deliver 17.2% revenue growth in 2019 and 8.7% growth in 2020. That growth, should it materialize, may help fuel not only the company's profits but also potentially its stock price and continued dividend growth.

Taiwan Semiconductor Manufacturing Company (TSM -2.68%), the world's top contract chip manufacturer, is feeling some near-term pain, thanks in large part to lower-than-expected Apple (AAPL -2.63%) iPhone sales. Apple tasks TSMC with manufacturing its A-series applications processors for both the iPhone and the iPad, and the former is one of the latter's largest clients.

"Even with a slow year like 2019, we firmly believe AI [artificial intelligence] and 5G are the megatrends that will drive future semiconductor growth," TSMC CEO C.C. Wei said on the company's Jan. 17 earnings call. "And we reaffirm our long-term growth projection of 5% to 10%" compound annual growth rate.

While investors wait for growth to return, shares of the chip manufacturing giant offer a solid dividend yield of 3.44%.