Super Bowl LIII is set for Feb. 3, and millions of fans will be watching when the Los Angeles Rams and New England Patriots play at Atlanta's Mercedes-Benz Stadium. What you might not know, though, is that some of those fans will be looking at the result of the big game in order to get a sense of how the stock market is likely to perform in 2019.

There's a lot of folklore surrounding investing, and the Super Bowl indicator is one of the most popular. According to the indicator, if a team from the old American Football League -- like the New England Patriots -- wins the Super Bowl, then the market will fall for the year. If a team from the old National Football League from before its merger with the AFL in the 1960s -- such as the Los Angeles Rams -- wins, then the market should rise.

The Super Bowl Indicator has had a good track record over more than half a century, posting about an 80% success rate. But as you can see below, the past several years haven't been good for the market signal. 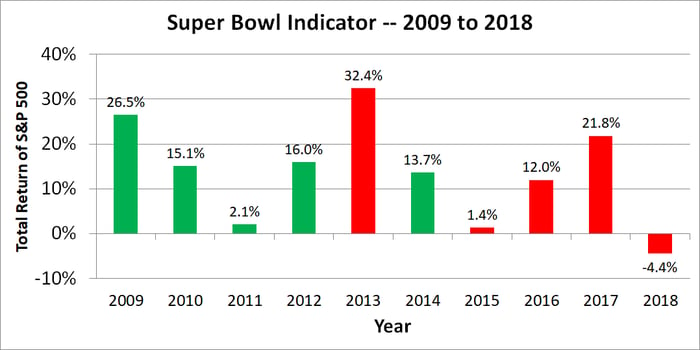 For four straight years, the Super Bowl indicator has gotten it wrong. A win from the Philadelphia Eagles in 2018 should have led to an up year, because even though Philly didn't have a team in the old days of the league, it now plays in the National Football Conference. Conversely, wins from the AFL's Patriots and Denver Broncos from 2015 to 2017 should have pointed to down years, but the S&P 500 climbed in all three -- although some will note that 2015's return came only after adding in the positive impact of dividend payments.

So far, the stock market has already seen big gains in 2019. But odds makers have the Patriots as slight favorites, and that could point to a reversal of fortune for the stock market if the Super Bowl indicator is right -- or another losing year for the indicator if the market holds its gains.