Please ensure Javascript is enabled for purposes of website accessibility
Free Article Join Over 1 Million Premium Members And Get More In-Depth Stock Guidance and Research
By Daniel B. Kline - Updated Apr 23, 2019 at 5:41PM

Something strange has happened this year.

The early game, the NFC Championship between the Los Angeles Rams and the New Orleans Saints, drew 44.1 million viewers for FOX, up 4.3% over last year. That was topped by the AFC Championship, which was watched by 53.9 million viewers, a 27% increase over last year, making the game the most-watched NFL matchup that was not a Super Bowl in five years, The New York Post reported.

That leads to a Super Bowl pitting the young, on-the-way-up Rams against the veteran Patriots. It's an intriguing game (with much of America having a rooting interest against Tom Brady, Bill Belichick, and the Patriots). In theory, that should keep ad rates for the big game moving upward (as they have mostly done throughout history). That, however, isn't what's happening, and ad rates for the NFL championship game may have finally plateaued. 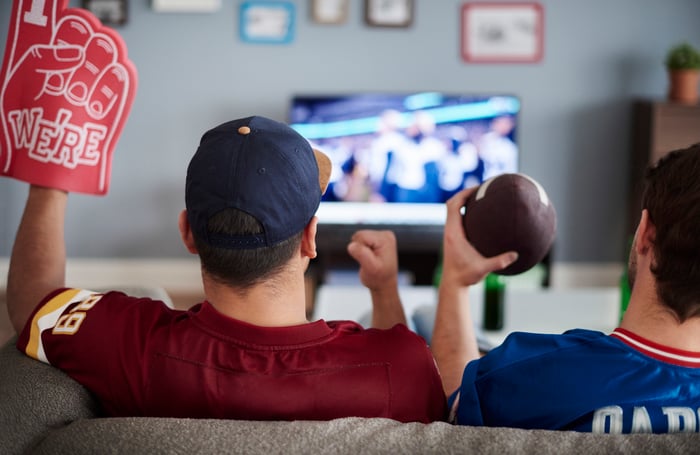 Ratings for the Super Bowl may have peaked.

Thirty-second ads for the 2019 edition of the big game on CBS are selling for between $5.1 million and $5.3 million, according to a report from Bloomberg. That places them in roughly the same range as the $5.24 million they averaged out to on NBC last year.

That's still a stunning number, and the game will almost certainly be the most-watched television program of the year, but the audience has been falling since 2015. Last year, 103.4 million viewers watched -- the smallest audience in nine years and a number likely hurt by the East Coast-only matchup of Philadelphia and New England.

The 2019 game could rebound, as the bicoastal matchup is an especially attractive one, but cord-cutting could also be a drag on total viewership. That's not to suggest the NFL or its broadcast partners are hurting, but it's possible that a ceiling has been reached.

More than just an ad

The challenge in setting value for 30 seconds of Super Bowl airtime is that the actual ad is only a piece of what you get. Companies are also paying for the scrutiny and media coverage the commercials get before they air and after the game. In that sense, an ad that can manage to get attention (a really good or really bad commercial) may be worth more than one that's just fine or okay.

Ads that air on this stage have the potential to become legendary. Spending just over $5 million for 30 seconds gives the advertiser the chance to launch a new product, create a memorable catchphrase, or change the course of its brand. Of course, that requires the right mix of script, actors, and intangibles, and at $5 million or so a pop, these 30-second Super Bowl spots may be a risk not worth taking for enough companies that prices may stay at this level or even fall in years to come.