Hess (HES 0.99%) proved that it was in the right place at the right time during the third quarter as it produced an unexpected gusher of profits thanks to higher oil prices and its top-tier position in North Dakota's Bakken Shale. However, with oil prices crashing during the fourth quarter, Hess might not deliver numbers that are quite as impressive when it reports those results later this week. That's one of a few items that investors should keep an eye on when the oil producer releases fourth-quarter earnings.

See if it stayed in the black

Analysts didn't expect all that much from Hess in the third quarter given that the consensus forecast was for the company to merely break even. That's why its $0.38 per share of adjusted earnings was such a shocker. Hess was able to post that unexpected profit by leveraging a 15% uptick in production from the Bakken and a big drop in costs to those higher oil prices. 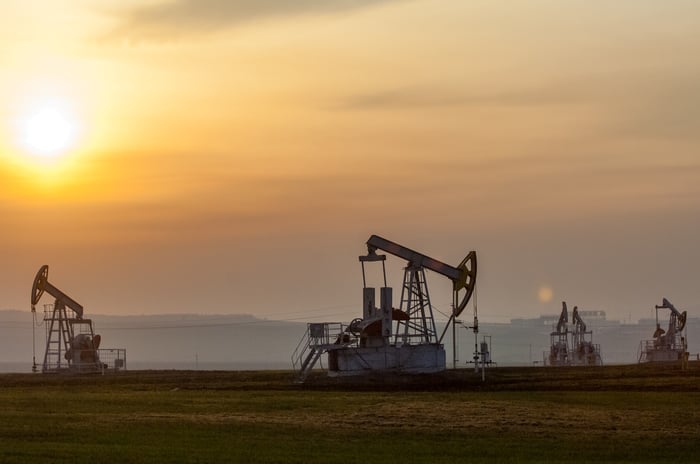 It will be tough for the company to repeat that performance during the fourth quarter considering that crude prices plunged 40% from their peak in early October. That's why analysts anticipate that the company will lose money during the quarter, with the consensus estimate calling for a loss of $0.38 per share. However, Hess did manage to beat analysts' expectations for the first three quarters of 2018, so investors should see if the company can outperform once again. A surprise profit could help Hess' stock win back some of last year's lost gains.

Keep an eye on production

Aside from oil prices, one of the key fuels behind Hess' success in the third quarter was its fast-growing position in the Bakken Shale. That should continue during the fourth quarter because the company added a sixth drilling rig to the region. The acceleration in drilling activity has Hess on pace to produce about 125,000 barrels of oil equivalent per day (BOE/D) from the region during the quarter, an increase of almost 6% from the third quarter.

However, the company sees overall production slipping from 279,000 BOE/D in the third quarter to 265,000 BOE/D during 2018's final period due in part to some anticipated downtime in the Gulf of Mexico. Investors should see if the company hits that target. If not, check if it experienced any unplanned downtime in the gulf or fell short of its production goal in the Bakken Shale.

Look for any changes to its drilling plans

With oil prices crashing to end 2018, most of Hess' peers are taking a cautious approach to capital spending this year. Anadarko Petroleum (APC), for example, plans to reduce its budget for 2019. That will enable Anadarko to save money so that it can send more cash to investors, with the company boosting its dividend and stock buyback program.

Hess, on the other hand, plans to spend significantly more in 2019, with its budget set 40% higher than 2018's level. That boost will enable it to accelerate its activity in the Bakken as well as finance its portion of developing a massive oil discovery in offshore Guyana with ExxonMobil (XOM 0.33%).

However, with crude prices crashing over the past few months, investors should see if that has any impact on Hess' spending plans. While the fall in crude oil likely won't alter spending on its joint venture with ExxonMobil, it could affect the company's near-term plans in the Bakken -- something to watch this quarter if, for example, it dropped that sixth rig in response to lower oil prices.

At worst, a short-term blip

The plunge in oil prices during the fourth quarter could have a near-term effect on Hess as the company might report a quarterly loss and could slow down its drilling. However, the longer-term outlook is much brighter thanks to its needle-moving development with ExxonMobil in Guyana. That project positions Hess to become a cash flow machine in the coming years -- even at low oil prices -- which makes it an excellent oil stock to consider for the long haul.