New data shows the iPhone XR made up the majority of Apple's phone sales in the recent quarter, but Apple is likely looking beyond the figures to its next move.

The latest data from Consumer Intelligence Research Partners (CIRP) shows that Apple's (AAPL -0.80%) most popular iPhone in the quarter ending in December was the company's new XR model. CIRP said that the iPhone XR accounted for 39% of total iPhone sales and the XS and XS Max models made up a combined 26% of sales.

The popularity of the iPhone XR is impressive considering that it only took a little more than a month for the device to become the most popular model (the XR went on sale at the end of October). 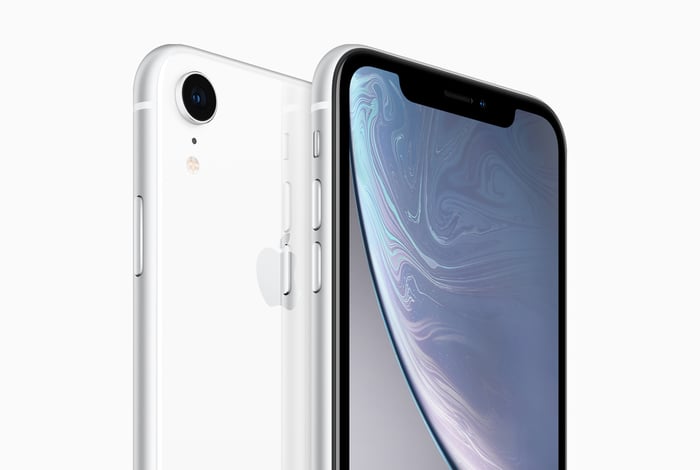 Other interesting data from the CIRP report shows that the percentage of iPhone buyers who upgraded from the base storage options increased year over year. In the quarter ending in December 2017, 33% of new iPhone customers upgraded to the larger iPhone storage models, while this year, 38% did so. Those storage upgrades likely helped increase the iPhone's average selling price (ASP). CIRP said in a press release:

The percentage of iPhone buyers who paid up for increased storage grew to 38% this quarter from 33% in the year-ago quarter. Based on the elevated pricing associated with larger storage, as well as the model mix sold in the quarter, we estimate Apple increased its ASP to well over $800.

If CIRP's data is accurate, that would mean the current iPhone ASP surpasses the previous high of $796 that was achieved after Apple released the iPhone X. The popularity of the iPhone XR and the potential for increasing phone selling prices is welcomed news for the company. But while this news may have boosted Apple investor sentiment in the past, it's likely not enough to lift the current cloud hanging over Apple's iPhone business.

You may recall that Apple released a rare correction to its guidance just a few weeks ago, noting that its total revenue would be lower than management's previous guidance range of $89 billion to $93 billion for the first quarter fiscal 2019 and would instead be $84 billion for the quarter.

Apple CEO Tim Cook said in its statement that economic challenges in China were part of the problem, but he also highlighted that changing smartphone consumer preferences were responsible as well. Cook said:

While Greater China and other emerging markets accounted for the vast majority of the year-over-year iPhone revenue decline, in some developed markets, iPhone upgrades also were not as strong as we thought they would be.

He added that fewer subsidies for smartphones and "significantly reduced pricing for iPhone battery replacements" have also hurt iPhone sales.

In the past, the news of rising average selling prices for the iPhone was enough to get Apple investors excited. After all, the iPhone contributes about 60% of the company's total sales. But in light of Cook's letter to shareholders, the simple fact that the latest iPhone model accounts for the majority of the company's phone sales and that it's likely selling at a higher price than previous models is no longer enough.

Looking beyond the iPhone

Apple indicated a few months ago that it doesn't want investors to spend so much time thinking about iPhone sales when it said it would no longer report iPhone unit sales in its quarterly reports. And what's become increasingly clear over the past few months is that Apple knows the days of relying on the iPhone to bring strong revenue growth are likely over.

Instead, the company is placing more emphasis on its services and wearable tech segments. Talking about its Apple Watch and its impact on consumer health, Cook said recently that, "If you zoom out into the future, and you look back, and you ask the question, 'What was Apple's greatest contribution to mankind?' It will be about health."

Cook also said his company would announce new services this year, which is an area investors should start paying more attention to. Apple's services sales grew by 24% in fiscal 2018 and now account for about 14% of the company's total revenue.

Apple may be benefiting in the short term from rising ASPs for its latest device, but the company's own statements show that Apple (and its investors) needs to be looking elsewhere for future growth.