It isn't all about the swipes.

At this point, like most people in this country, you've probably encountered Square's (SQ 3.77%) products. The increasingly visible company provides the front-end hardware and backbone software that allows your local small business to accept payments through a mobile phone (using a Square-branded dongle) or via a tablet point-of-sale terminal.

But that's only part of the story. In mid-2017, my colleague Chris Neiger wrote a fine article exploring the various ways Square makes its money. With such a dynamic company, it's worth revisiting the subject almost 1 1/2 years later. Here's how things currently shape up for the ambitious payment processor. 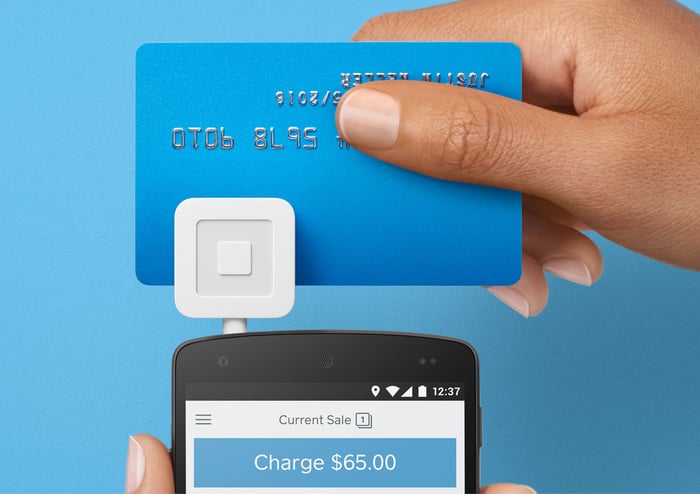 As with any payment processor -- incumbent Mastercard (MA 1.08%) is a good example -- Square makes the bulk of its money by taking a small cut of every transaction made through its system. One very appealing aspect of Square's operations is that it's come up with numerous other ways to make coin. And these are becoming an increasingly important part of its business.

Among its growing list of services is Instant Deposit, in which the take from a sale can be deposited near-instantaneously into a client's bank account. The company just introduced a business debit card co-branded with Mastercard and is even redoubling its efforts to obtain what's effectively a banking license. Anyone for a Square five-year certificate of deposit (CD)?

Let's take a look at Square's revenue breakdown. We'll do a side-by-side comparison, placing the company's most recently reported quarter (Q3 2018) next to the raw Q2 2017 figures provided by Chris in his article:

The most striking aspect of this is the share of that bedrock transaction-based revenue. As a percentage of the overall total, it fell dramatically to 74% in the most recent period from Q2 2017's 87%. In contrast to this decline, subscription and services-based revenue recorded an 8 percentage point gain across that span of time.

These developments show that Square is effectively building its ecosystem taller and wider and becoming a "stickier" service provider for its clients.

Another figure of note is that for bitcoin, which leaped from nothing to 5% of total revenue in Q3 2018. In the final quarter of 2017, the company gave users of its peer-to-peer solution Cash App the ability to buy bitcoin. Given the volatility of the cryptocurrency and the costs associated with brokering it, Square makes an "insignificant" loss from bitcoin.

Nevertheless, it does demonstrate that the company is actively and constantly searching for new -- and perhaps ultimately lucrative -- revenue streams.

I've always been fond of restless companies that constantly buzz around for fresh ways to make money. Historically, payment processors basically have one major way to make money that dominates their revenue list -- transaction fees. (Again, Mastercard is a towering example of this.) Although Square is still very reliant on transaction fees, it's moving away from near-total dependency on them.

What Square isn't, of course, is consistently profitable. Even casual observers of the company are aware that it only recently (Q3 2018, in fact) netted its first quarterly profit. And it wasn't much of a net, at a margin barely over 2%.

But as evidenced by how well the company's stock has done since the start of this year, that flip into the black seems to validate Square's diversification strategy. It's a sound and sensible one, and largely because of it, I'm bullish on the company's prospects.

Why Block, Affirm, and Upstart Holdings Were Plunging Today
357%