In the fourth quarter of fiscal 2018, Starbucks posted a solid 3% comp sales increase. Sales trends improved sequentially across the world, including in Starbucks' two biggest markets: the U.S. and China. Earnings per share also came in slightly ahead of the analyst consensus. The only real negative was that comparable store traffic continued to decline. 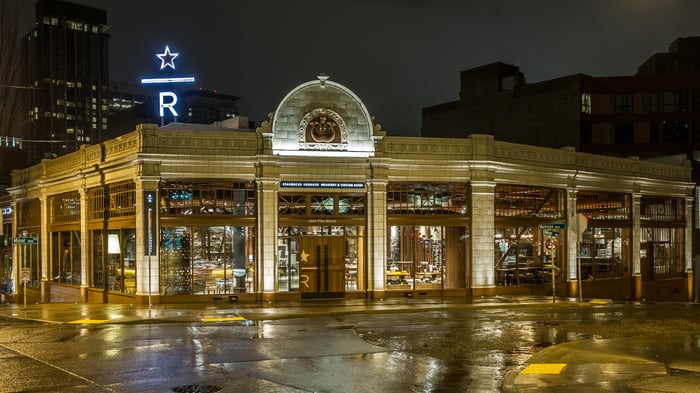 Tailwinds could continue to grow

There's a good chance that Starbucks will be able to sustain the recent acceleration in its comp sales growth. That's because it didn't reap the full benefit of some of its key sales growth initiatives last quarter.

First, Starbucks is still growing its base of "My Starbucks Rewards" loyalty program members at a double-digit clip in the U.S. It is also early in the process of targeting nonmembers with personalized offers. Over time, as Starbucks boosts engagement with both types of customers, it should be able to drive more consistent traffic growth.

Second, Starbucks and Alibaba (NYSE:BABA) had just begun rolling out their partnership in China at the beginning of last quarter. By December, Starbucks was offering delivery from 2,000 cafes in 30 cities across China, via Alibaba's Ele.me platform. Starbucks and Alibaba will continue to enhance their cooperation during 2019. For example, Starbucks is opening dedicated delivery kitchens in Alibaba's Hema supermarkets to take the strain off its traditional cafes.

Third, Starbucks announced last month that it is partnering with Uber Eats to roll out a delivery service to a quarter of its U.S. company-operated stores in early 2019. That will provide another lever to drive sales growth.

Starbucks' comparable store traffic growth may never return to historical levels. However, a combination of new store openings, modest traffic increases, and steady pricing adjustments could enable it to deliver strong sales growth and achieve its target of double-digit EPS growth in the years ahead.

Starbucks stock currently trades for about 25 times the company's 2019 EPS estimate. That's not exactly a bargain, but it's a good deal cheaper than the stock's valuation was a few years ago.

While Starbucks is a more mature company today, it has a strong brand in many large markets around the world. Moreover, it still has substantial growth opportunities, even in the U.S. Finally, the company has a sharper focus on keeping costs down and returning cash to shareholders, which should bolster its EPS growth. As a result, while its headiest growth days are behind it, Starbucks stock still looks like a solid choice for long-term investors.