Tiny acorns like Quantenna Communications, iRobot, and Yeti can grow into mighty oaks.

Much of the country is caught in the grip of bone-chilling temperatures, but you can heat up your portfolio with small-cap stocks, which are typically among the best-performing stocks on the market.

Of course, finding the right ones is key, because as meteoric as their rise can be, small-cap stocks can flame out just as fast. The quality of the business is always important, regardless of a stock's market cap, and Quantenna Communications (QTNA), iRobot (IRBT -1.04%), and Yeti (YETI 3.66%) could be the top small-caps to warm your portfolio this February. 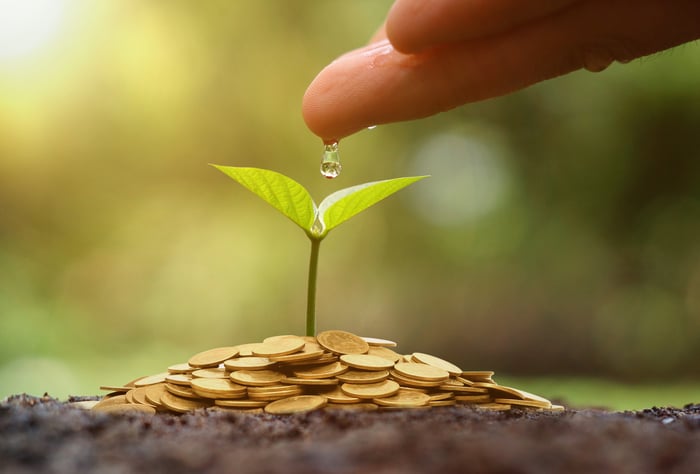 Next-generation Wi-Fi systems for the masses

Anders Bylund (Quantenna Communications): This is one of those quiet companies that make the world tick. You won't find Quantenna-branded products on store shelves, but the company's Wi-Fi chips power some of the fastest and most reliable network routers on the market today. The company also provides networking solutions for the other side of the connection with a hungry eye on the simmering Internet of Things market. Quantenna is far from the only player in this market, but it is often found pushing the boundaries of Wi-Fi technology before its peers get around to it.

That innovation-driven business model supports a robust financial platform. Revenues rose by 18% year over year in the third quarter, at a time when archrival Qualcomm's (QCOM -2.47%) sales fell by 3%. And Quantenna is profitable, showing a 17% net margin and positive cash flows over the last four quarters.

In spite of these obvious strengths, market makers have been punishing Quantenna's stock. Share prices have fallen 15% lower in three months and 8% lower in the last week alone. You can pick up shares at the bargain-bin valuation of 11 times trailing earnings. That's a steal for a company that is expected to grow earnings by 25% annually across the next five years. And don't forget that these estimates may well be too conservative -- next-generation Wi-Fi networks will only grow in importance as IoT devices proliferate around us.

Still small but poised to explode

John Bromels (iRobot): iRobot, the maker of the famous -- or infamous -- Roomba robotic vacuum, is right at the cusp of the world of mid-cap stocks, with a market cap of just over $2 billion. But in many ways, it's a quintessential small-cap company. It manufactures a few niche products in an emerging industry that is set to explode over the next few years. This makes it a great stock to buy into now, while it's still small (and still relatively cheap).

The world of smart-home devices in general is comparatively small, consisting largely of smart speaker systems like Amazon's Echo. But it's growing quickly. According to website eMarketer, about 74.2 million Americans -- 27% of the U.S. population -- will have a smart home device in their home by the end of this year.

iRobot has been working with industry bigwigs Amazon and Google parent Alphabet to integrate its vacuums with their products and also to create smart-home applications that will utilize iRobot's proprietary home mapping technology. Already, the Amazon Echo can tell your Roomba to start vacuuming. The possibilities from there are infinite.

Despite all this opportunity and a share price that's appreciated more than 175% over the last three years, iRobot is currently trading at a reasonable valuation, with a P/E ratio of about 37. Over the past two years, that P/E has been swinging back and forth between the low 30s and the low 50s, so now seems to be a good time to pick up shares of this small-cap company that may not be small for much longer.

Cool your heels with this stock

Rich Duprey (Yeti): Yeti, the newly public maker of premium coolers for the outdoors market, is transforming itself into a lifestyle brand that is seeing the public buy increasing amounts of its drinkware and accessories. Not everyone can afford a $1,000 cooler to tailgate with, but premium, stainless steel mugs give consumers a taste of the lifestyle.

Its recent fourth-quarter earnings report shows cooler sales rose 10% to $91.2 million, while drinkware and accessories surged 24% to $143.5 million. Well over half of its revenues are from things that aren't coolers. That could be a problem, as the coolers are the underlying reason people want to buy the frills. But cooler sales are still growing, and Yeti has shown an ability to introduce new products. Its soft coolers were a big hit last year that showed the potential for further line extensions.

I wouldn't sink a large amount of money into Yeti, but the cooler maker could be a small-cap stock worth tucking into a corner of your portfolio. Analysts forecast Yeti being able to grow earnings in excess of 47% annually for the next five years, so that while it trades at 38 times trailing earnings, it offers a discount to its growth rate.

Yeti also trades at less than twice its sales, and its stock is below the offer price from its IPO. There is risk from competitors like Coleman that can churn out economical coolers the masses will buy, but Yeti has a reputation for quality and durability unsurpassed in the industry. And since its coolers are seen as something of an aspirational luxury, it will retain a following that should serve it well.