Please ensure Javascript is enabled for purposes of website accessibility
Log In Help Join The Motley Fool
Free Article Join Over 1 Million Premium Members And Get More In-Depth Stock Guidance and Research
By Evan Niu, CFA - Updated Apr 25, 2019 at 12:15AM

For the first time ever, Apple (AAPL 1.40%) this week provided some official details regarding the size of its global iPhone installed base. While Apple will no longer provide quarterly unit sales data, the company does plan on providing updates about the overall installed base and iPhone installed base "on a periodic basis," CFO Luca Maestri said. 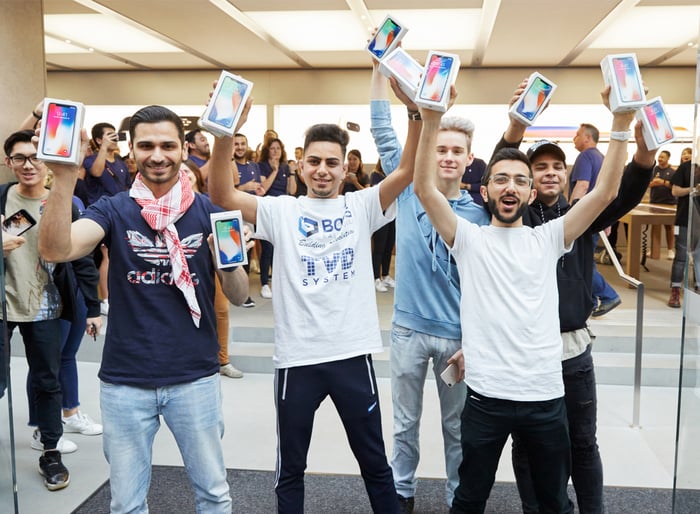 Most sales are upgrades

We do have iPhone unit sales data for the first three quarters of 2018: 140.4 million. Apple's iPhone revenue in the fourth quarter was $52 billion, down 15% from a year ago. If we assume that average selling prices (ASPs) were roughly flat at approximately $800, that would suggest Apple sold 65 million units, compared to the 77.3 million iPhones it sold a year ago. That would bring iPhone unit sales for 2018 up to around 205 million.

At face value, that would imply that less than 40% of iPhones sold in 2018 went to users new to the platform, since the installed base only grew by 75 million. But the reality is that an even smaller proportion probably went to new users, as used iPhones being sold in the secondary market -- which aren't accounted for in Apple's results -- are inevitably contributing to the installed base growth as well.

That's partially why Apple is trying to downplay the importance of quarterly unit sales, instead pointing to the installed base as driving services revenue growth. Here's CEO Tim Cook from the earnings call:

Because of the quality and durability of iPhones, they maintain significant residual value, making trade-ins a great opportunity. It's not only great for the environment. It's great for the customer as their existing phone acts as a subsidy for their new phone. And it's great for developers as a phone that is traded in and redistributed can help grow our active install base.

To be clear, this all should come as little surprise, considering the fact that the smartphone market has been maturing for years, but these are the first hard numbers that Apple has provided firsthand. However, there's a conflicting narrative from Apple around the importance of upgrade sales. The company has at times downplayed the significance of upgrades, with Cook going as far as to say a year ago that the upgrade rate is "not something that we overly fixate on."

Yet Apple discussed the impact of slow upgrades in the December quarter in great detail, noting various factors that have hurt upgrade activity in recent quarters. Everything from the battery replacement program to carriers around the world reducing subsidies to foreign-exchange-related price increases, among others. The tech titan is now aggressively promoting trade-ins in an effort to spur more upgrades. "Following the launch of the new iPhone trade-in campaign, our stores more than doubled the volume of iPhones traded in compared to last year, reaching an all-time high in Q1," Maestri said.

Apple may have not been fixated on upgrades before, but it sure is now.