Please ensure Javascript is enabled for purposes of website accessibility
Free Article Join Over 1 Million Premium Members And Get More In-Depth Stock Guidance and Research
By Daniel B. Kline - Updated Apr 25, 2019 at 12:29AM

The discount retailer has a new partner that will vastly increase its licensed apparel offerings online.

The digital store, the Fan Shop by Fanatics, "will offer hundreds of thousands of items from professional sports leagues, including NFL, NBA, MLB, NASCAR, and MLS," according to a blog post from Eric O'Toole, Walmart's sports and fitness e-commerce general manager. The selection will include everything from jerseys, hats, and other apparel to collectibles, tailgating items, and novelty products.

"Fanatics also holds exclusive licensing rights to produce and distribute merchandise for major professional sports leagues and events," O'Toole added, "which will enable us to quickly give customers access to the latest and greatest items for sports' biggest moments, including official fan gear for this weekend's Super Bowl and the recent NFL Conference Championships."

As part of the deal, Fanatics will be the exclusive provider of officially licensed sports merchandise on Walmart.com moving forward. 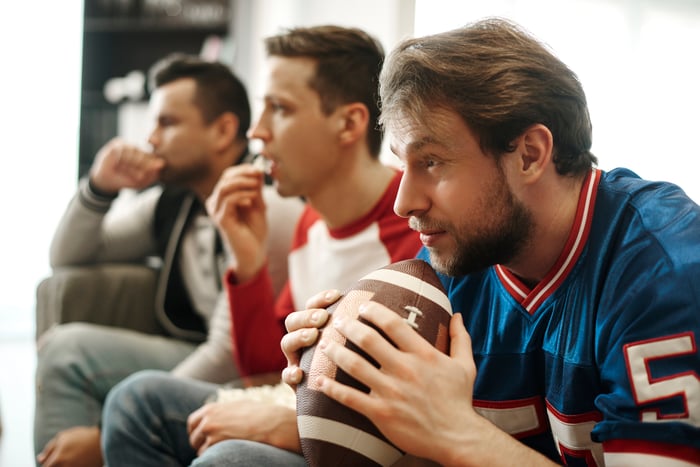 Fanatics operates NFLShop.com, NBAStore.com, and MLBShop.com. It makes its own merchandise and sells a number of brands that Walmart previously did not have access to. This includes Nike ( NKE -1.50% ), New Era, Mitchell & Ness, and others.

Nike has sold select merchandise on Amazon.com since 2017. It has worked with Walmart's Jet.com since October.

This deal fills a major hole for Walmart while greatly increasing distribution for Fanatics. It takes merchandise that consumers want and makes it easier for them to get it. That's more important in a challenging retail climate where chains like Dick's Sporting Goods ( DKS -2.56% ) lose a top rival in Sports Authority (back in 2016) and don't show significant growth despite the reduced competition.

"The Fanatics partnership with Walmart will certainly benefit both companies," Boston Retail Partners Ken Morris wrote in a comment on Retailwire. "For Walmart, it increases the traffic on and brand image of the Walmart.com marketplace. As Walmart adds more leading brands to the marketplace, more consumers will think of it as a first place to do product searches, which Amazon currently dominates."

Fanatics does not currently sell on Amazon.com. The online leader does, however, offer a selection of sports apparel, memorabilia, and novelties through other partnerships.

Good for Walmart and consumers

This deal takes Fanatics, a somewhat niche/behind-the-scenes player, and gives it a much larger public platform. That may not matter to hard-core sports fans who already knew where to buy apparel (whether it was through a league shop, a team store, or Fanatics directly). For casual fans, however, this makes impulse purchasing easier.

Sunday night, for example, America will know whether the New England Patriots or Los Angeles Rams won the Super Bowl. When the game ends, casual fans and bandwagon jumpers will be looking for T-shirts, hats, and other championship gear. Walmart is now positioned to meet that need and become a destination for sports fans.

That's a big win for the retailer which is making it easier to buy in a category that's not only high-interest but often impulse driven. This should help Walmart add sales from current customers and add some shoppers it may otherwise never have reached.