Amazon.com (AMZN 3.04%) reported fourth-quarter and full-year 2018 results after the market close on Thursday.

As it did in the first three quarters of the year, the e-commerce and cloud computing giant once again beat Wall Street's earnings expectation. It also slightly exceeded the Street's revenue consensus estimate.

Shares declined 4.9% in after-hours trading on Thursday. We can attribute the market's reaction to first-quarter 2019 revenue guidance coming in lighter than Wall Street was expecting, along with concerns about the company's plans -- shared on the earnings call -- to increase spending on investments in 2019 relative to 2018.

Here's an overview of Amazon's quarter, along with its guidance for the first quarter of 2019, using five metrics. 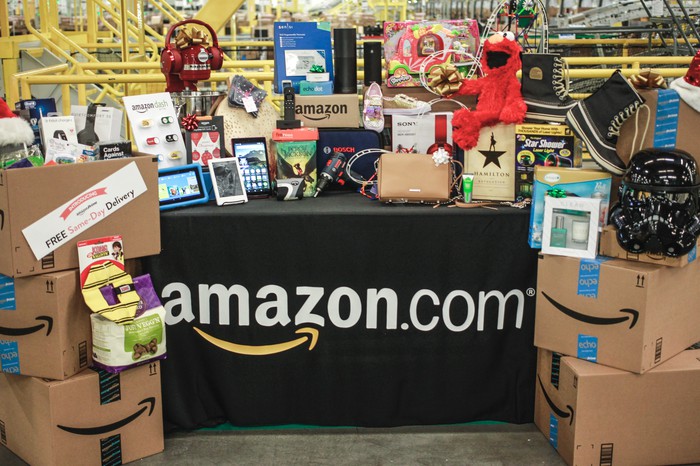 Amazon's net quarterly sales increased 20% year over year to $72.38 billion, exceeding the $71.87 billion Wall Street consensus estimate and coming in at the high end of the company's guidance range of $66.5 billion to $72.5 billion. Excluding the $801 million loss from foreign exchange, revenue grew 21%.

Revenue growth slowed considerably this quarter after beginning to slow last quarter, when it increased 29% year over year. This is largely because this quarter Amazon fully lost its revenue bump from its Whole Foods acquisition, as it bought the organic grocer in the third quarter of 2017.

Here's how segment growth broke out:

Operating income increased 78% year over year to $3.79 billion, comfortably exceeding Amazon's guidance of $2.1 billion to $3.6 billion. As has been the story all year, increased efficiencies in North America and AWS drove the growth in operating income.

AWS continues to get more profitable on a year-over-year basis. Its operating margin (operating income divided by revenue) was 29.3% in the quarter, up from 26.5% in the year-ago period, though down slightly from 31.1% in the third quarter.

The fourth quarter of 2017 included a provisional tax benefit of approximately $789 million associated with U.S. tax reform. Excluding this benefit, EPS nearly tripled, up from $2.16 in the year-ago quarter. Adjusted EPS comfortably beat the $5.67 that Wall Street was looking for.

For the first quarter of 2019, Amazon guided for net sales of $56 billion to $60 billion, representing growth of 10% to 18% year over year. The high end of this range falls a little short of the $60.96 billion Wall Street was projecting, which was probably the main reason for the market sending shares of Amazon down in after-hours trading on Thursday evening.

The company expects operating income of $2.3 billion to $3.3 billion, representing growth of 21% to 74% year over year.

In short, Amazon turned in a strong quarter.

Its first-quarter 2019 revenue and operating income outlook ranges are both quite wide. There's a huge difference between year-over-year revenue growth of 10% with operating growth of 18% (the low end of both ranges) and year-over-year revenue growth of 18% with operating income growth of 74%. Given that Amazon tends to issue conservative guidance, it seems more likely than not that investors can probably expect the first quarter of 2019 to be at least quite solid, perhaps even robust.

John Mackey, CEO of Whole Foods Market, an Amazon subsidiary, is a member of The Motley Fool's board of directors. Beth McKenna has no position in any of the stocks mentioned. The Motley Fool owns shares of and recommends Amazon. The Motley Fool has a disclosure policy.