The information management specialist sees the need for a speedy expansion.

In the cloud computing industry, it's important not to get left behind, but the rapid pace of innovation makes it hard to keep up. Open Text (OTEX -0.78%) has understood the threat of letting its competitors build up a lead in what it sees as the greatest opportunity it has for growth, and it wants to defend its turf and work at surpassing the competition through a combination of organic growth and smart strategic combinations.

Coming into Thursday's fiscal second-quarter financial report, Open Text shareholders weren't certain whether the company would be able to restart its growth engines fully. But Open Text managed to deliver modest gains in both revenue and earnings, and its future strategy looks geared toward pulling out all the stops in its efforts to become an increasingly important player in the cloud computing space. 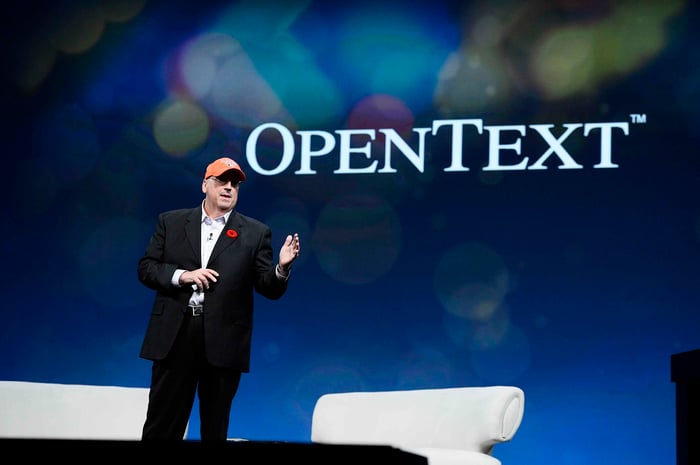 Open Text's fiscal second-quarter results were far from ideal, but they still came in a lot better than many had feared. Revenue of $735.2 million represented growth of just 0.1% from the year-ago quarter, but that was far more than the projected $728 million that most of those following the stock had expected. On the bottom line, adjusted net income of $215.7 million equated to adjusted earnings of $0.80 per share, which was up from the year-ago $0.76-per-share figure as well as topping the consensus forecast among investors for $0.72 per share this time around.

Some of the same trends that have troubled Open Text investors showed no signs of going away. Recurring revenue growth amounted to just 3% overall, and the cloud services and subscriptions division reported sales gains of just 5%. Both licensing revenue and sales from professional service and other sources were down from year-ago levels, eating away most of the recurring sales gains.

However, Open Text did get back some customer interest. After seeing just 14 customer transactions amounting to $1 million or more in the fiscal first quarter, Open Text scored 35 such transactions this time, with 19 on-premises deals versus 16 cloud-based transactions. Most of Open Text's target customer industries, including financial, consumer goods, services, technology, and public sector, were represented among business wins during the period.

CEO Mark Barrenechea pointed to Open Text's strategic direction in bolstering future growth. "Our strategy is total growth," Barrenechea said, "where M&A will continue to be our largest growth driver, augmented with organic growth." The CEO pointed to two cloud-based acquisitions closed in the past 60 days as showing the extent of Open Text's commitment to growth, spending $386 million in capital in the process.

What's next for Open Text?

One of those deals got announced just today, when Open Text said it had acquired Catalyst Repository Systems for $75 million. Catalyst is a leading provider of electronic discovery solutions for corporate legal departments and law firms handling litigation and transactional work, and Open Text intends to incorporate Catalyst's features into its own discovery solutions unit. As Barrenechea noted in announcing the deal, the combination not only heightens the quality of the electronic discovery service but also brings Catalyst's client base into the Open Text fold.

Open Text is confident that it can unlock the value of the companies it buys. Given the size of the addressable market for its enterprise information-management software -- which it estimates at roughly $100 billion -- there's room for multiple players, but Open Text still wants to be a leader. The company acknowledges the need to be good at integrating not just businesses but also the people behind those businesses, but it thinks it has the track record necessary to get the job done both with its latest purchases and with future acquisitions.

Open Text shareholders bought into that vision, and the stock climbed 5% on Friday morning following the Thursday-afternoon announcement. Since the company has a firm strategy in place to counter some troubling trends toward slower organic growth, investors are optimistic that Open Text can get moving in the right direction again.