Is this PayPal's next cash cow?

But there's a more exciting story for PayPal investors beneath these headline metrics. The company's peer-to-peer payment app Venmo, which PayPal gained through an acquisition of Braintree in 2013, is seeing surging growth recently. More importantly, the app could soon make a transition from losing money to making money. 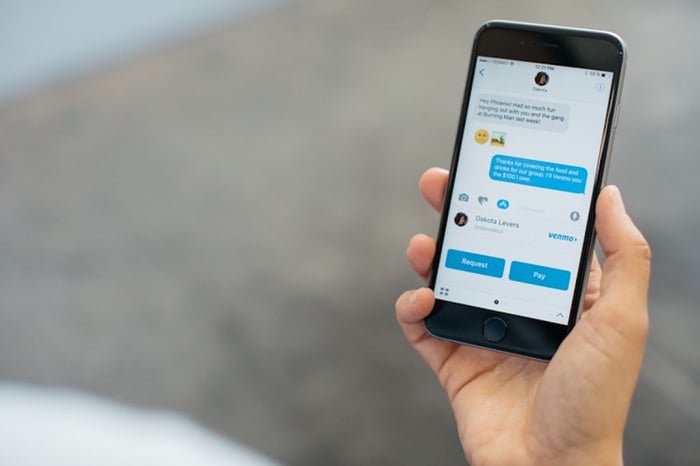 Highlighting just how significant Venmo's TPV has become, it has exceeded the company's total payment volume from eBay for two quarters in a row now. "I couldn't be more pleased with our revenue trends and the numerous incremental growth opportunities we see for Venmo," said PayPal CEO Dan Schulman in the company's fourth-quarter earnings call.

While the virality of the Venmo network and strong tailwinds in P2P transactions are playing a role in the app's sharp growth, Venmo is also benefiting from continued secular traction in mobile-payment volume. Mobile-payment volume on PayPal's platform in Q4 was $67 billion, accounting for 41% of TPV. In addition, mobile-payment volume during the quarter was up 40% year over year, easily outpacing the company's 26% year-over-year growth in TPV.

PayPal's been seeing meaningful momentum in monetization recently. In the company's third quarter, Schulman said the app reached a "tipping point" when it came to monetization. Twenty-four percent of Venmo users had participated in a monetizable action, management said at the time. In Q4, monetization of Venmo improved further, with 29% of users participating in a monetizable transaction during the period.

Schulman detailed some of the areas Venmo is seeing monetization progress during the company's fourth-quarter earnings call:

The Venmo card continues to gain significant traction, Instant Transfer revenues continue to increase. And as a result, our Venmo initiatives have produced a revenue run rate going into 2019 that now exceeds $200 million.

Perhaps the most exciting news about Venmo during the call came from PayPal CFO John Rainey when he said he believes the company is a quarter or two away from breakeven on the app. Once the app crosses breakeven, Rainey added, the company plans to "put our foot on the pedal and see the same type of profitability in this platform or more perhaps than we do with PayPal and some of our other services."