Industrial materials specialist Hexcel has a number of cyclical and secular trends working in its favor, and the stock looks a good value today.

It's well known that both Boeing (BA 5.64%) and Airbus (EADSY 2.96%) are ramping up their production of aircraft in response to multi-year backlogs and ongoing strength in orders. Each is a highly investable companies in its own right -- Boeing, in particular, looks well positioned to grow cash flow and earnings. But what about investing in one of their suppliers, like advanced composite technology company Hexcel (HXL 4.47%)? Let's take a look at the factors that could make that company attractive for investors.

Five reasons why Hexcel is a buy 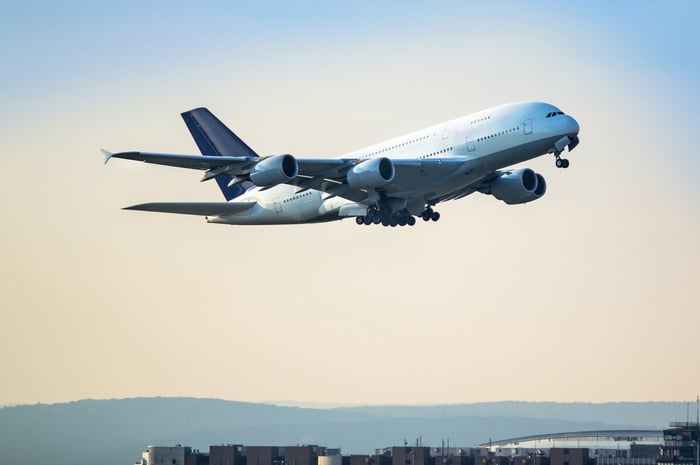 Let's put some flesh on the bones of these points by looking at the numbers.

Starting with the increase in Boing and Airbus build rates, here's how Hexcel CEO Nick Stanage put it during the recent fourth-quarter earnings call: "We anticipate high single-digit growth in 2019 sales driven by widebody production rate increases for the composite rich A350 and Boeing 787 programs with 2019 being the first full year at rate 10 for the A350 and a large portion of 2019 will see the 787 at rate 14."

For an idea of how important the major aircraft programs are to Hexcel here's a rough estimate based on Boeing/Airbus backlogs and Hexcel's estimates of shipset value per plane.

Data source: Company presentation. Approximate value analysis by the author using new aircraft engines. *Comprises 737MAX and 737 **Airbus A320 family/single-aisle aircraft.***Comprises 87 in backlog for 777 and 326 for the 777X.

As you can see in the chart above, wide-body aircraft (777X, 787, A330, A350 and A380) utilize significantly more advanced composite technology than narrow-body aircraft. The A350 is the most important single program for Hexcel, but if demand for the 777X meets Boeing's expectations, it could lead to a significant increase in Hexcel's backlog.

Check out the latest earnings call transcript for Hexcel.

Speaking of the 777X, during the earnings call, Stanage elaborated: "I'm also pleased to report that the Hexcel team has increased our content on the 777X by 50% compared to the legacy version, which brings an expected shipset value of about $1.5 million to Hexcel."

This serves to highlight the company's strong momentum, and the news comes at a time when it is reaping a harvest from its previous investments. As the chart below shows, Hexcel management expects 2019 to be another year of strong FCF generation, thanks in part to relatively lower capital expenditures than it has had in recent years.

In fact, when asked about the difference between maintenance and expansionary capital spending on the earnings call, CFO Patrick Winterlich said, "In terms of maintenance, it's hard to [be] scientific, as you've heard me say many times. $60 million to $70 million, I would say is maintenance, the rest is growth."

In other words, Hexcel's FCF generation could exceed $360 million in 2019 if it weren't still investing to support future growth in earnings and, ultimately, FCF.

Is Hexcel a buy?

If you are bullish on Boeing, Airbus, and the commercial aviation industry in general, then Hexcel stock would be a good way to gain exposure to the space. A combination of favorable cyclical trends (build rates) and secular trends (newer aircraft, wide-body orders) mean this supplier should produce good earnings growth for years to come.