It sounds simple enough, but to realize Muilenberg's aims, Boeing will have to achieve two key strategic victories in the next few years. Let's take a look at what those are, and why they are so important for investors in the stock. 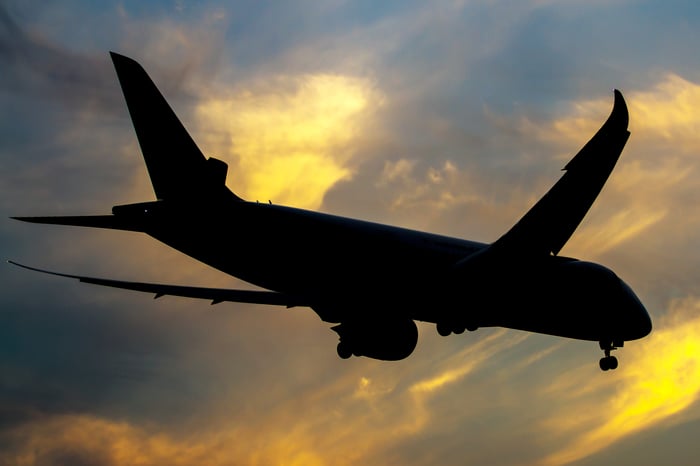 Boeing is winning the battle in the wide-body market with its 787 Dreamliner. Image source: Getty Images.

In recent years most of the attention has focused on the battle in the narrow-body market, and for good reason. As shown in the chart below, narrow-body orders (the Airbus A320 family and Boeing 737 aircraft) have significantly surpassed wide-body orders.

In fact, in 2017, narrow-body orders from Airbus and Boeing combined were 7.9 times those of wide-body orders. In comparison, the ratio was just 1.6 in 2007.

However, Muilenburg believes there will be a pickup in wide-body demand around the start of the next decade -- driven by replacement demand for existing aircraft, and from airlines waiting for Boeing's new large wide-body 777X aircraft. 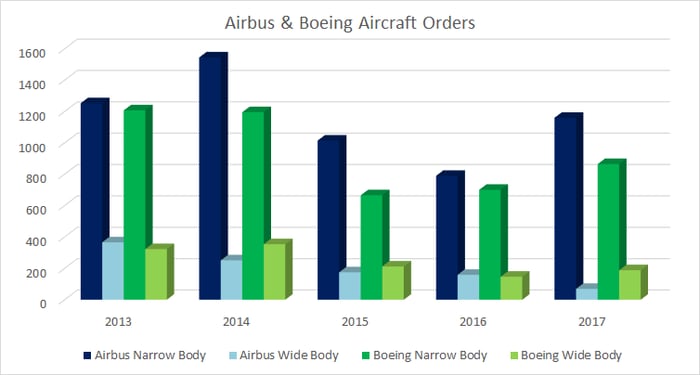 The chart above shows that Boeing has extended its traditional lead over Airbus in wide-body aircraft in recent years. The company's 20-year outlook calls for an extended period of growth in wide-body demand: "Today, the global wide-body passenger fleet stands at roughly 4,100 airplanes. The forecast shows the need for approximately 8,200 new wide-body deliveries for passenger service over the next 20 years."

Moreover, Boeing expects 60% of wide-body deliveries in the next 20 years to come from the small wide-body segment. That would be good news for Boeing, because its 787 Dreamliner aircraft (94 net orders in 2017) is currently trouncing Airbus A330 (21 net orders in 2017).

All told, if the wide-body market picks up as expected, then Boeing is well-placed to benefit; the pickup in orders would provide a second wind to an already strong commercial aerospace cycle.

Boeing recently increased its expectation for 2017 BCA operating margin to 11.5% from previous guidance of more than 11%, and Muilenburg believes Boeing can make steady progress toward a mid-teens margin over the next few years.

To put this into context, BCA operating margin of (let's say) 15% in the first quarter of 2018 would result in a 36% increase in BCA operating profit. The benefit is obvious. But the question is: How is Boeing going to get there?

How Boeing is cutting supply costs

Muilenburg's plans involve cutting supply-chain costs and muscling in on manufacturing more parts for its own planes. The idea is that not only can Boeing cut supplier costs, but it can even do so by competing with its own suppliers.

In addition, by manufacturing original equipment itself, Boeing can benefit from long-term aftermarket revenue coming from replacement demand. This is a key point because it's the aftermarket revenue that generates the bulk of profits for suppliers. In fact, United Technologies (NYSE:RTX) CEO Greg Hayes has claimed that United Technologies Aerospace Systems (UTAS) doesn't make money on products sold to Boeing -- the money is made on replacement demand.

Moreover, United Technologies -- a longtime supplier of landing gear on the 777 -- didn't even bid for the landing gear contract on the 777X because Boeing's pricing requirements were so onerous, and there is little aftermarket revenue from landing gear. Ultimately, Boeing shifted 777 and 777X landing gear manufacturing to Heroux-Devtek, a small company in Canada.

Boeing expands its own manufacturing too

An example of how Boeing plans to increase its own manufacturing comes from the recent deal to partner with France's Safran to develop auxiliary power units (which provide energy for planes other than for propulsion) -- a market typically dominated by Honeywell and United Technologies Similarly, the recent $3.2 billion deal to acquire aerospace parts company KLX is also part of Boeing's strategy to move into lucrative aftermarket servicing.

What it all means for Boeing investors

The investment proposition at Boeing isn't just about capitalizing on the current strong order trends in narrow-body aircraft. It's also about Boeing gaining a second wind from a combination of increased wide-body demand and ongoing margin expansion. This means Boeing is well-placed to grow profits into the next decade, and investors should look at the long-term strategic development of the business as much as they follow current order trends.

Meanwhile, taking cost-cutting measures and muscling in on suppliers should enable margin expansion at BCA. All told, Boeing is on track to generate good returns for investors in the coming decade.