Another quarter, another good earnings report from The Boeing Company (NYSE:BA). Moreover, the first-quarter results set the company up for a strong 2018 and provided evidence that Boeing is making good progress on its long-term objectives. Let's take a look at three of them, and how their successful execution can add value for shareholders. 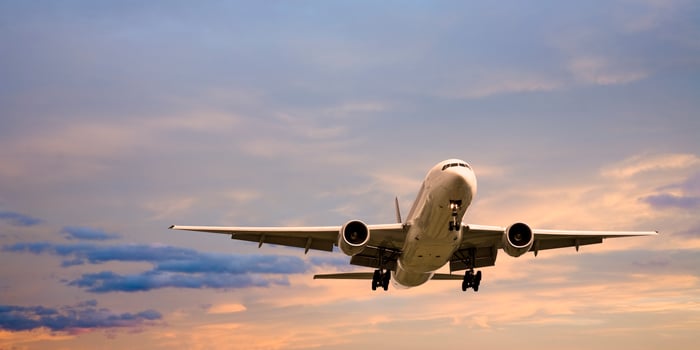 First, CEO Dennis Muilenburg is on a drive to reduce Boeing's cost structure and its supply chain costs, notably through its so-called "Partnering for Success" program. While the program is not without controversy -- some suppliers are feeling squeezed -- overall it's helping expand operating margin at Boeing's commercial airplanes (BCA) segment.

Management has previously talked of a 15% BCA operating margin by 2020 -- something Muilenburg expects to make steady progress on over the course of several years. The first-quarter earnings and commentary suggest Boeing is on the right track. As you can see below, management raised its full-year guidance for overall earnings and cash flow, and offered an improved outlook for BCA margin.

Boeing 737 production is ramping up

Second, cutting costs on its aircraft programs is one thing, but maintaining and increasing production rates on the aircraft programs is equally important. Increasing airplane production will improve profitability, but it should also lead to an expansion in margin as unit production costs tend to fall as more planes are produced. Moreover, increasing the production rate on, say, the 737 is likely to lead to more orders as it reduces the lead time before customers can receive delivery of a plane.

Going into the earnings report, there were concerns about what management would say about its plans to ramp up production of the Boeing 737 to 52 aircraft a month in 2018 from 47 in 2017 -- not least because fuselage supplier Spirit AeroSystems (NYSE:SPR) faces challenges meeting the production rate on the 737, according to Spirit's CEO, Toms Gentile.

Meanwhile, the engine on the 737 MAX (Boeing expects 40%-45% of 737 deliveries will be in the MAX variant in 2018) -- namely CFM International's LEAP -- fell behind expected production in the first quarter. CFM is a joint venture between General Electric Company (NYSE:GE) and France's Safran. GE shipped only 186 LEAP engines in the first quarter, around 70 below its original plan.

When Sanford Bernstein analyst Doug Harned asked about Boeing 737 MAX production in light of the difficulties at Spirit and GE, Muilenburg reassured investors that "those are all issues that we're on top of" and "We know there will be pressure points as we ramp up, but we're confident that we'll continue to ramp up and hit our delivery marks."

In addition, Boeing received five net new orders for the legacy 777 aircraft in the quarter, bringing its backlog to 90. That represents around two years' backlog, based on the planned production rate of 3.5 a month in 2018, and will help fill production slots before delivery of the new 777X aircraft begins in 2018. Boeing still has "more work to do to fill the remaining 777 production slot," but ongoing orders are obviously helping.

Meanwhile, there was a nice surprise on the 767 -- a wide-body aircraft now produced for freight purposes -- with Muilenburg declaring a planned increase in production from 2.5 a month currently to three "beginning in 2020." Increasing cargo demand is driving orders for new freight aircraft.

Finally, the 787 Dreamliner now has more than 630 firm orders in its backlog, and the "plan to increase Dreamliner production to 14 airplanes a month in 2019 is well supported," according to Muilenburg. The 787 booked 24 net orders in the quarter.

It was good news all around with regard to production for Boeing.

Third, the progress made by Boeing on its 767, 777, and 787 wide-body aircraft programs supports Muilenburg's "high confidence in a meaningful increase in wide-body replacement demand early next decade." That would be good news for Boeing and its 777X -- expected to benefit from growing wide-body demand -- and also for General Electric (provider of engines for the 777X) and advanced composite technology company Hexcel Corporation (NYSE:HXL). Hexcel's carbon fiber technology tends to generate significantly more revenue per plane on wide-body aircraft than on single-aisle planes.

If Boeing's prediction for improving wide-body orders comes true, then the industry is likely to receive a significant second wind at the start of the next decade.

BCA's margin expansion means Boeing is achieving its aim of redefining its cost structure and supply chain. Meanwhile, aircraft production remains on target and demand for wide-body aircraft looks set to improve. These are all strategic objectives which will improve long-term profitability for Boeing. All told, the aerospace giant continues to surprise on the upside in a high-flying aviation market, and it's well on track with its strategic objectives.