Hexcel Corporation (NYSE:HXL) is one of the most interesting stocks in the aerospace sector. The advanced composite technology company is not only a play on growth in aircraft production, but also a secular play on the increasing use of advanced materials within aircraft. The company has a lot going for it, so let's look in more detail at why buying stock in this Boeing (NYSE:BA) and Airbus (OTC:EADSY) supplier could be a good idea. 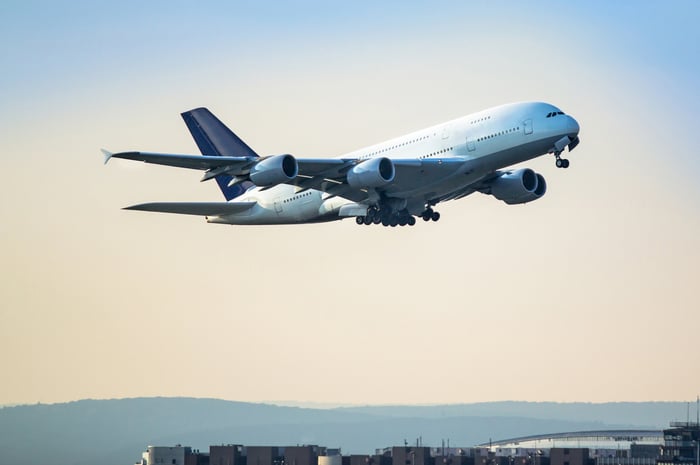 The following chart helps to illustrate a key point that is often lost in the discussion of the aerospace sector. It's easy to conclude that strength in the aerospace industry is merely a continuation of the 6% to 8% growth rates reported just before the last recession. However, something is different this time.

As you can see below, the airline industry is significantly more profitable, and when airlines make money, they tend to order new planes. In other words, the current aerospace cycle looks likely to be stronger and longer-lasting than previous up cycles.

New aircraft orders are obviously good news for Boeing and Airbus, but they're particularly good news for a company like Hexcel, not least because the company makes its money from advanced composites on new aircraft, which has a small aftermarket. 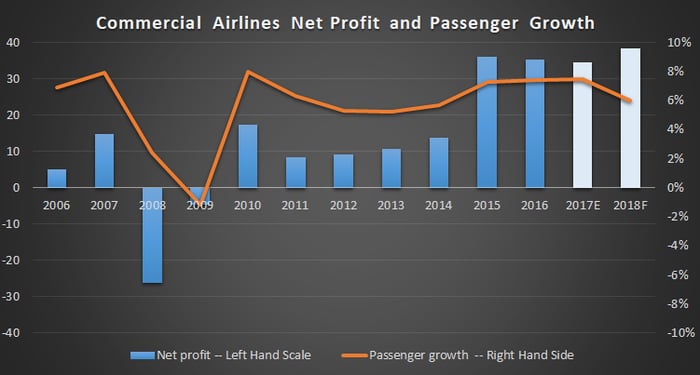 Hexcel also benefits from the increasing use of advanced composites on new planes. Hexcel's management says carbon fiber is five times stronger than aluminum but 30% lighter, so aircraft made with the material are significantly more fuel-efficient. The relative advantage of using advanced composites is even greater with larger, wide-body aircraft (more on that in a moment).

No matter the size of the aircraft, Boeing and Airbus are using more and more advanced composites as a percentage of weight. This means Hexcel generates more revenue per plane as the newer versions of aircraft are built.

As noted above, Hexcel generates more revenue per plane from larger, wide-body aircraft. Of course, this doesn't mean the company can't make more money from single-aisle aircraft overall, as single-aisle aircraft are far more numerous. However, it does mean that a marginal difference in wide-body production will make more of a difference to Hexcel. In particular, the Airbus A350 and Boeing 777X are worth keeping a close eye on.

The following table shows the value of Airbus and Boeing's backlog and the split between single-aisle aircraft (Boeing 737 & Airbus A320 family) and wide-body aircraft (the rest). The value of the Airbus and Boeing backlog is worth around $10 billion to Hexcel. That's not bad for a company currently generating $2 billion in revenue -- and recall that commercial aerospace produced only around 72% of 2017 sales. (In case you're wondering, 17% went to space and defense, while the remaining 11% went to the industrial sector.)

There are a few more key points in this table:

4. The wide-body market will improve

In a nutshell, Hexcel investors should be hoping for an improvement in the wide-body aircraft market -- something that would mark a reversal of fortune, as wide-body aircraft have become relatively less important in recent years. The good news is that market commentators are expecting a recovery in wide-body demand in the coming years -- even as single-aisle orders continue to outpace.

For example, Boeing's current market outlook for 2017-2036 calls for 9,130 wide-body deliveries (compared to around 2,300 currently in backlog with Airbus and Boeing), with "a large wave of potential replacement demand beginning early in the next decade" and "more airlines shifting to small and medium/large wide-body airplanes like the 787 and 777X."

Airbus' 2017-2036 outlook is less optimistic overall: It forecasts 34,889 overall market deliveries compared to Boeing's forecast of 41,030 -- but it's more optimistic with regard to large aircraft. Airbus sees about 10,100 deliveries of wide-body and very large aircraft, estimating that 54% of the value of deliveries will come from wide-body aircraft (larger aircraft tend to be more expensive).

If Boeing and Airbus are right, then Hexcel has strong growth prospects in the coming years. Throw in an improving cash flow profile, and Hexcel could reward investors for many years to come. In particular, keep an eye on orders for the Airbus A350 and the success of the 777X aircraft program, whose first delivery is set for 2020. Hexcel has a bright future.