If you believe in the investment case behind buying The Boeing Company (NYSE:BA), then you might want to consider stock in Hexcel Corporation (NYSE:HXL). Nearly three-quarters of the carbon fiber composites company's sales go to the commercial aerospace industry, of which nearly 90% end up on Boeing and Airbus (OTC:EADSY) aircraft. Moreover, the increasing use of lightweight composites on aircraft means Hexcel has secular growth prospects as well. 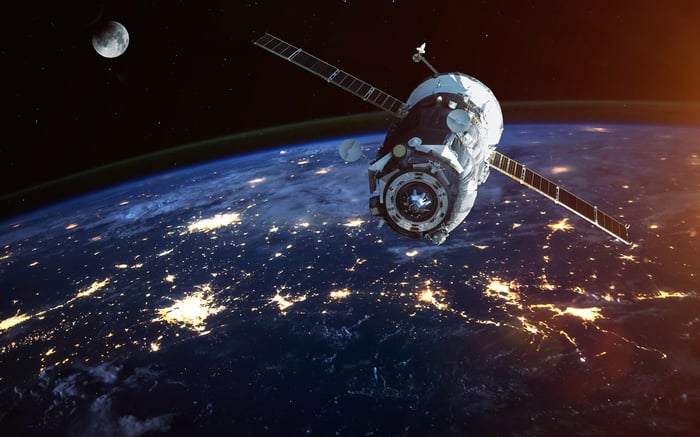 The case for buying stock in Boeing is based on the idea that ongoing strength in passenger miles, airline profitability, and load factors will lead to more orders. Furthermore, investors are hoping Boeing will successfully ramp production of its narrow-body 737 and wide-body 787 -- Airbus also plans to ramp up production of its leading narrow-body A320neo and its wide-body A350.

Boeing's production ramps are in response to strong orders, and as scale increases, the company should be able to cut unit production costs more -- margin expansion and strong earnings growth should follow, particularly on the 787 Dreamliner program.

However, here's the thing. If you believe Boeing is a geared play on continued growth in commercial aerospace, then Hexcel is worth buying, too. The company provides advanced composites and engineered products on the major aircraft programs at Airbus and Boeing. The key advantage of carbon fiber composites is their high strength to weight ratio, meaning they can substantially reduce an aircraft's weight -- a major plus for airlines as it improves productivity. In addition, they tend to have a long life, which reduces replacement costs on aircraft.

The main arguments are as follows:

The multiyear backlogs and strong orders at Boeing and Airbus are demonstrations of the growth prospects in the commercial aerospace. Turning to the issue of favorable secular trends. As you can see below, the newer versions of aircraft tend to have more carbon-fiber composites as a share of weight. 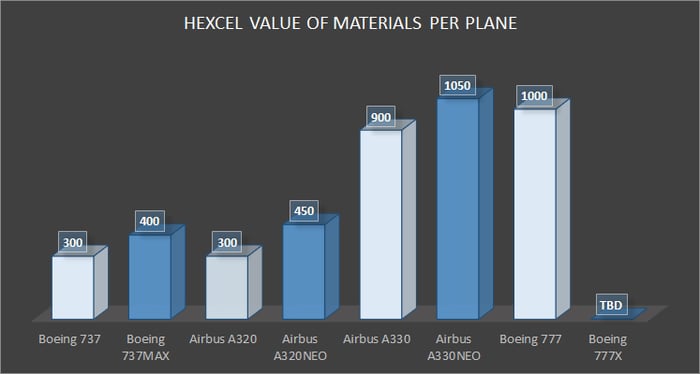 Clearly, there is a favorable trend in place for the increased use of carbon-fiber composites.

Turning to cash flow and valuation matters, it's worth noting that on an EV/EBITDA basis, Hexcel is cheaper than Boeing and HEICO Corporation (NYSE:HEI) -- another attractive mid-cap stock with exposure to aerospace. Moreover, unlike Boeing and HEICO, Hexcel's valuation isn't out of sync with its rating in previous years. 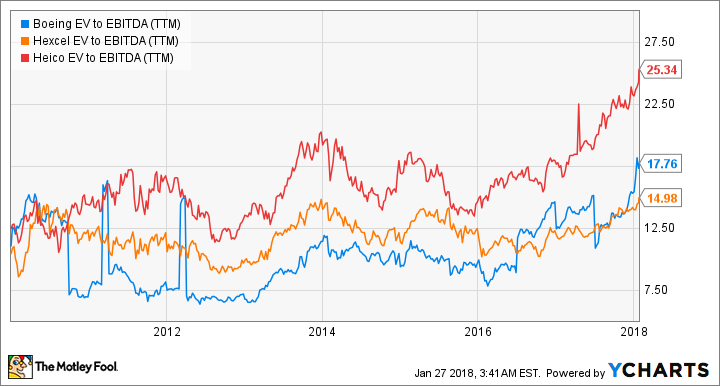 The good news is, management expects cash flow to improve significantly in the coming years. As you can see below, heavy capital expenditures (in order to support growth) have eaten into FCF generation in recent years. However, capital expenditures are set to fall to around $180 million in the next couple of years, leading to $230 million in FCF in 2017, or 3.8% of its current market cap -- that's not bad for a company with double-digit earnings growth prospects. Moreover, FCF should appreciate further in the coming years, particularly as Boeing and Airbus ramp production and buy more from Hexcel. 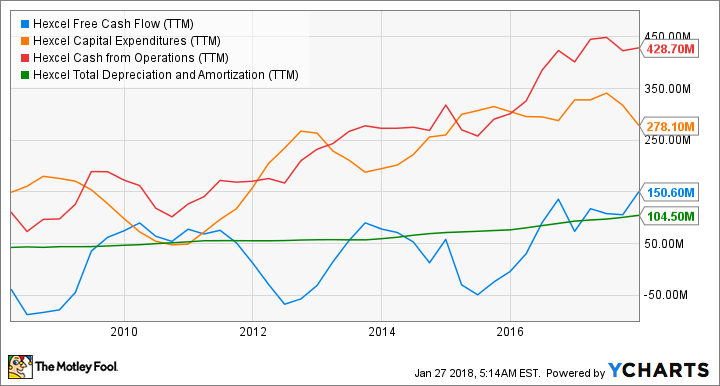 Aside from the usual headline risk of an economic slowdown, or another event affecting Boeing and Airbus order growth, there are a few considerations here:

Is Hexcel worth buying?

If you like Boeing's stock, then the answer should be yes. Boeing's valuation looks like it needs ongoing strength in the aerospace cycle in order to justify it. In other words, if you buy Boeing, you are investing in the belief of a strong ongoing commercial aerospace market.

That's the same assumption you would be making by buying Hexcel. Aside from Hexcel's exposure to Airbus, the main difference is Hexcel is cheaper and has long-term upside potential from the secular shift toward more composites in aircraft. The stock is attractive for aerospace lovers.