There is no U-turn in sight for the motorcycle maker.

Harley-Davidson (HOG -0.24%) posted one of its worst quarterly earnings reports in recent history. While the fourth quarter is typically the bike maker's slowest, not even during the depths of the recession a decade ago did Harley sell so few motorcycles in the U.S.

To make it worse, international sales fell, too, throwing a big wrench into the company's plan to grow foreign sales to half of its total volume. The result was a big miss on earnings, as adjusted profits came in at just $0.17 per share versus analyst expectations of $0.28. What's more, Harley says 2019 isn't shaping up to be too good, either. 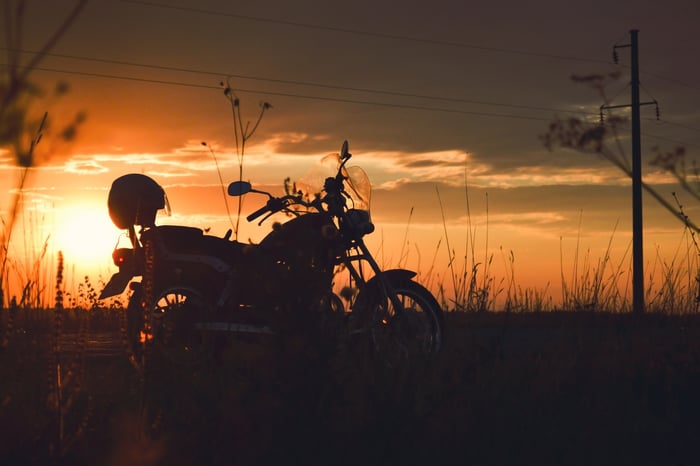 Is the sun setting on HOG? Image source: Getty Images.

Although the bike maker's stock rallied over the month of January, rising 8% on hopes of a sales turnaround, there never was any reason for the optimism.

Sales were tumbling by double-digit rates for three of the last four quarters, and there was every indication it could get even worse. It's only because international sales rose incrementally for the year that the overall performance wasn't worse. But the U.S. market remains a big problem, and Harley hasn't indicated that it knows what to do to reverse it.

The big reveal this month was the LiveWire electric motorcycle, which CEO Matt Levatich says is Harley's "halo product." He says it is accomplishing its primary purpose of bringing attention to Harley-Davidson and its portfolio of future electric two-wheelers, though driving sales would arguably have been a better marker. But a bike that offers lower performance at twice the price of the competition ensures few LiveWires, if any, will move off dealer lots when they arrive in August.

Harley's gas-powered motorcycles aren't selling, either. U.S. sales fell 10.1% for the quarter to just 20,849 bikes, worse than the 21,246 bikes sold in the fourth quarter of 2010, and a bigger decline than in the industry as a whole, which was off 8.7%. International sales also declined on continued weakness in Asia. 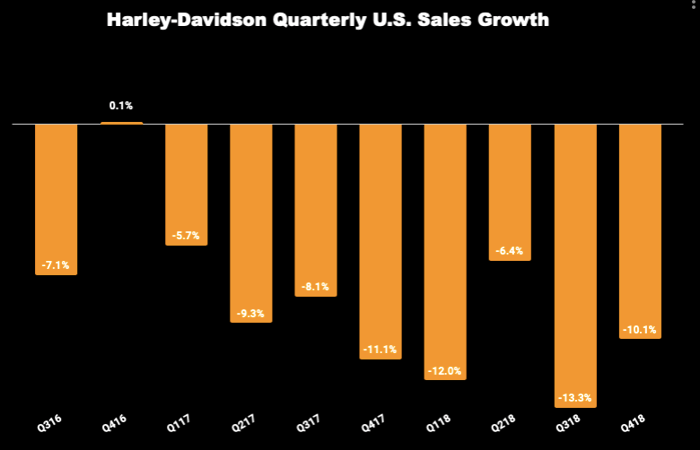 Although Harley has been managing the cadence of shipments to dealers throughout the year, the fourth quarter was so bad that it ended up shipping fewer motorcycles than it intended to keep a lid on dealer inventory. Where it had expected shipments to fall 2% to 4% for the year from last year's already depressed level, they actually were off almost 8% because the company had to hold off sending them to foreign dealers, too. The first quarter of 2019 is going to be bad as well.

Harley offered a range for shipment estimates for the period that was wide enough to ride a fleet of motorcycles through. It said first-quarter shipments could be down anywhere from 7% to as much as 19% from last year. The primary reason for the wide range is not shipping any Street motorcycles due to a recall of almost 44,000 Street bikes manufactured between May 2015 and December 2018. The recall was caused by faulty brakes. Another recall earlier in the quarter for some of its touring and Softail bikes because of bad clutches affected another 238,000 bikes worldwide.

Cutting back to the bone

Harley also took on additional restructuring in the quarter because the situation is going south so quickly. It has consolidated its two final assembly plants, moving operations from its Kansas City, Missouri, factory to the one in York, Pennsylvania, while also closing a wheel manufacturing plant in Australia.

Although many news media reports said tariffs eliminated all of Harley's GAAP earnings, restructuring costs and the recalls were larger items. Tariff costs rose $13.4 million in the quarter, but the restructuring swiped $19.4 million, the Street recall cost $20 million, and the clutch recall took $35 million.

Worse, Harley doesn't have the parts to fix the Street bikes, so shipments will be delayed for months. It expects sales to be down by 2,500 in the first quarter just because of those motorcycles.

This was really a terrible quarter for Harley-Davidson, even without the tariffs and recalls, which only made it worse. The coming year isn't looking any better, and whatever hope it has for electric motorcycle sales is years down the road. The motorcycle market will bottom out eventually, but how far Harley skids in the meantime will determine the severity of the road rash it inflicts on investors.