Investors who waited years for an electric motorcycle that could change the company's trajectory will be disappointed.

What the heck is Harley-Davidson (HOG 3.50%) thinking? Its long-awaited electric LiveWire motorcycle is now ready for pre-order pending shipment in August, but instead of making an accessible, high-performance machine that could jump-start a sales renaissance, it instead delivered another premium-priced bike that underperforms the competition.

Motorcycle enthusiasts and investors waited five years to see what Harley would come out with, and this is how they've been rewarded. To shareholders who hoped the LiveWire would spark Harley's turnaround, I have some advice: Pull the plug on that dream now, because it isn't going to happen. 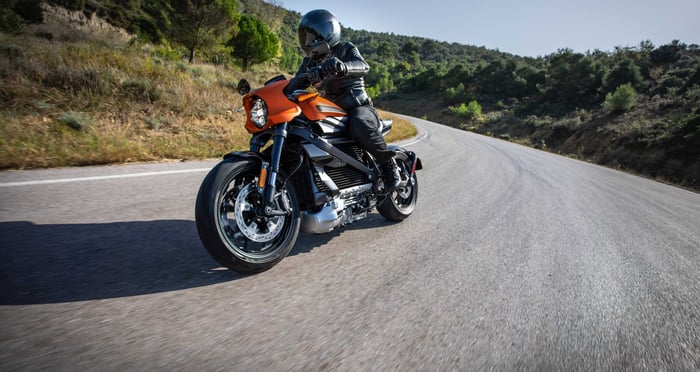 Make no mistake, the 2020 LiveWire is a beauty. It accelerates from 0 to 60 mph in 3.5 seconds (with "futuristic sound!") and offers riders "twist and go" technology that requires no clutch or gear shifting. There's a Level 1 onboard battery charger so that you can plug into any normal outlet and charge the bike overnight, or you can visit a public Level 3 DC Fast Charge station for speedier charging -- typically 20 minutes to an hour.

Where Harley-Davidson is short-circuiting its vision is on the price: the LiveWire retails for just under $30,000, meaning that within the company's lineup, only the trikes and ultra high-end CVO bikes are more expensive. And while its battery range of 110 miles on a single charge in urban driving conditions is better than the 60 miles the prototype offered, it's still less than the ranges of electric motorcycles already on the market. Relatively few people will want or be able to buy this bike.

By contrast, the Model S from Zero Motorcycles, which has been dubbed the "Tesla of motorcycles,"  comes with its new, more powerful ZF14.4 battery. When outfitted with an optional Power Tank (which provides an additional 3.6 kilowatt hours of battery storage), Zero's e-bike can do 223 miles of city driving or almost 100 miles on the highway, and it sells for half the price of a LiveWire. Notably, the LiveWire can only manage 70 miles of highway riding on a charge, meaning you won't be taking it out for many long Sunday morning jaunts in the country.

Harley has experienced a four-year sales slump as buyers turn away from expensive, chrome-laden, big-block engine bikes like those the industry leader is famous for. Instead, a ridership demographic that is tilting younger and increasingly female has been favoring leaner, lighter, and cheaper motorcycles.

Harley did get the look right: You'd be hard-pressed to find any chrome on the LiveWire, and as the frame is made out of cast aluminum, it's probably light enough to offset what is likely a heavy battery. And the company built plenty of "connectivity" into the bike -- you can use your smartphone to check battery life, the bike's location, and tamper notifications.

But if the urban market is what Harley-Davidson was targeting with the LiveWire -- and its "All Roads Lead to Harley" road map it laid out last summer said the wave of electric bikes coming would be "light, nimble and ready to tackle the urban landscape" -- well, 30 large is likely going to prove too high a number for folks to plunk down on a motorcycle just to get around the city.

Indeed, the price tag makes it difficult to tell if Harley-Davidson is really committed to electric motorcycles -- or even if it's serious about pulling itself out of its sales slump.

The LiveWire won't make the short list for most motorcycle shoppers, even those considering an e-bike. And if Harley doesn't generate sufficient sales now, how is it going to commit more resources to future models?

This seems to me like a failure in the making, and for anyone who hoped the LiveWire was the bike Harley-Davidson mounted to jump-start its turnaround, this is where you get off. The company has learned nothing from quarter after quarter of declining sales, and I see little chance that the stock will halt its downward slide anytime soon.