If true, Apple's probably doing it to boost its lucrative services business.

If you're an investor in Apple (AAPL 0.79%) stock, or just follow the company closely, then you probably know that Apple generates the bulk of its revenue from its iPhone product line. However, as its iPhone business is currently in decline, the company is looking for growth in its non-iPhone products to offset it.

There are two relatively minor products in Apple's hardware portfolio that you've probably heard of: Apple TV and HomePod. Both of these products have faced criticism for being more expensive than competing offerings. However, according to Daring Fireball's John Gruber (via MacRumors), those products might be relatively pricey not because Apple is trying to wring out fat profits from each device sold, but because they're expensive to make. So expensive, in fact, that Gruber says Apple is slinging the Apple TV at cost (suggesting roughly 0% gross margin) and potentially selling the HomePod at a loss. 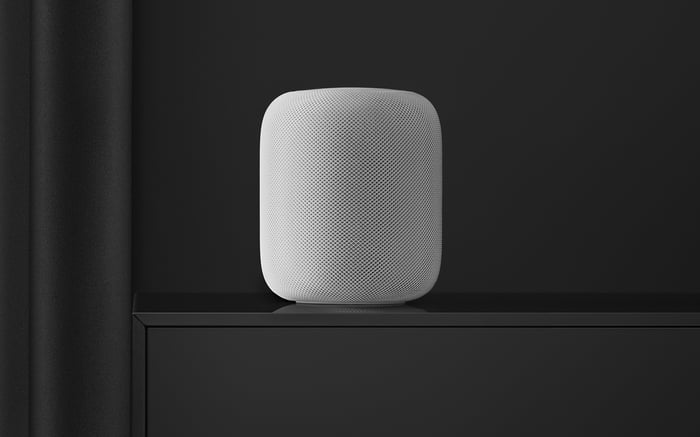 There's no way for us to know the cost structures and margin profiles of these products for sure -- Apple only discloses the consolidated gross margin of all of its hardware sales -- but it wouldn't surprise me if what Gruber's sources are telling him is mostly correct. Here's why.

Products like HomePod and Apple TV aren't ever going to be big moneymakers for the company -- they're products that are forced to compete in extremely saturated, cutthroat markets. Turning a real profit on such products isn't easy, even for a company like Apple that consistently generates more profit from consumer devices like smartphones, tablets, and personal computers than any other company.

With that being said, there's a strategic benefit for Apple to essentially forgo profitability on such products altogether (or, perhaps more optimistically, generate relatively minimal gross profit from them): strengthening its ecosystem.

One of the key selling points of Apple products is that they work well with other Apple products, which allows the company to build relatively sticky hardware and software relationships. Consumer Intelligence Research Partners, for instance, recently published data showing that over the last few quarters, Apple's iOS (operating system) customer retention rate has risen fairly dramatically.

More recently, Apple has increased its focus on building out its services business. While the company offers some services that aren't tied to its hardware products (for example, the Apple Music streaming music service), many of its revenue streams, such as the royalties that Apple collects on iOS and Mac app sales, depend on the existence of a large and growing installed base of Apple hardware products.

Devices like the Apple TV and the HomePod enable the company to have credible offerings in the media player and smart-speaker product categories, respectively. While it would certainly be better if the company could generate material gross profits from the sales of such products (every little bit helps), Apple may think that it can generate better business results -- and, ultimately, shareholder value -- by taking the hit on the hardware side. To this point, in its most recent quarter, Apple's consolidated hardware gross margin was 34.3%, while its services gross margin was 62.8%.

Thus, Apple will try to make up for lower Apple TV and HomePod profits over the long-term through platform stickiness and more robust services revenue. It doesn't hurt that the company reportedly has a video-streaming service coming just around the corner.