Please ensure Javascript is enabled for purposes of website accessibility
Log In Help Join The Motley Fool
Free Article Join Over 1 Million Premium Members And Get More In-Depth Stock Guidance and Research
By Adam Levine-Weinberg – Updated Apr 10, 2019 at 11:09AM

Demand for Tesla's priciest vehicles may not be high enough to support investors' profit expectations for 2019.

Investors in Tesla (TSLA -3.69%) had a muted reaction to the electric car pioneer's earnings release last week. Revenue more than doubled year over year in the fourth quarter, and Tesla posted a solid profit and strong free cash flow for the second consecutive quarter. On the other hand, the company's adjusted earnings per share of $1.93 fell short of the average analyst estimate of $2.19.

Yet the more troubling part of Tesla's fourth-quarter earnings report was its guidance for 2019. The company expects its recent profitability improvements to continue this year -- with the possible exception of the first quarter -- but this projection may be built on wishful thinking.

What Tesla expects in the year ahead

Despite its rapid revenue growth, Tesla has actually started shedding jobs recently, in an effort to operate more efficiently. It is in the midst of cutting its full-time workforce by 7%, which should reduce costs by about $400 million annually.

Tesla says that these cost cuts and other efficiency gains will allow it to keep gross margin stable for the older Model S and Model X product lines in 2019 while improving Model 3 gross margin to around 25% later this year. That in turn would drive strong profitability and free cash flow in the final three quarters of 2019. (Tesla also hopes to turn a profit in the first quarter, but it faces a temporary headwind related to beginning Model 3 deliveries in Europe and China.)

The path to Model 3 gross margin improvement is tricky

Last quarter, Tesla delivered 61,394 Model 3s, up about 13% sequentially. Meanwhile, labor hours per vehicle declined by 20% compared to Q3 while Tesla learns how to build the Model 3 more efficiently. Nevertheless, gross margin remained flat sequentially at a little more than 20%, as Tesla introduced a somewhat cheaper mid-range model during the quarter. The pressure on Model 3 gross margin will intensify in 2019. First, Tesla cut all of its vehicles' prices by $2,000 in the U.S. at the beginning of this year to partially offset the reduced federal tax credit available for Tesla buyers.

Second, Tesla has been selectively fulfilling the highest-margin Model 3 orders thus far -- most notably by not starting production of the long-promised $35,000 base model. That strategy is not sustainable indefinitely. Tesla's recent pricing changes, the surprise introduction of a mid-range model, and its decision last summer to allow customers who are willing to pay for a premium version to skip the line (and thereby get a bigger tax credit) all indicate that its production is outpacing demand for the priciest versions of the Model 3.

Tesla is starting deliveries to Europe and China now, which will allow it to tap into new pools of demand for the priciest Model 3s during the first half of 2019. That should temporarily buoy gross margin, offsetting Tesla's price cuts in the U.S. However, the company currently estimates that it will begin delivering the most affordable versions of the Model 3 in four to six months.

In its 2019 outlook, Tesla admits that it is relying on "careful management of mix" to get to a 25% gross margin for Model 3. Yet its practice of building the most expensive models first will limit its ability to manage the Model 3. By the end of 2019, variants that cost less than $40,000 could account for the vast majority of Model 3 production by necessity. Thus, Tesla will need deep cost reductions just to hold Model 3 gross margin steady at around 20%.

Another potential headwind is that Tesla may produce fewer high-margin Model S and Model X vehicles this year. Tesla recently stopped nighttime production of the Model S and Model X, according to CNBC, although some analysts believe this is because it is churning out cars at a faster rate during the daytime shifts, and the change does not represent an outright production cut.

What we do know is that Tesla expects a modest year-over-year decline in combined deliveries of the Model S and Model X this quarter. Additionally, Tesla said that it expects to deliver between 360,000 and 400,000 vehicles in 2019.

The low end of that range would actually be slightly below the run rate from the fourth quarter. Furthermore, Tesla plans to steadily increase Model 3 output in 2019, reaching a production rate of 7,000 per week at the Fremont factory by year-end. Taken together, these estimates strongly suggest that combined deliveries of the Model S and Model X could take a big step backward from last year's total of 99,394. 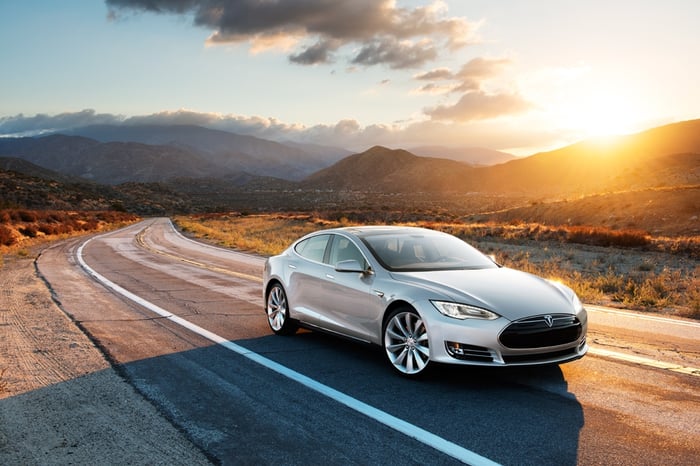 Tesla may not be able to sustain the recent rate of Model S production. Image source: Tesla.

Tesla remains an exciting high-growth company, with revenue expected to rise more than 30% in 2019. The opening of its first China factory in late 2019 (or perhaps early 2020) will expand its production capacity and allow it to dramatically reduce Model 3 prices in China, which should boost sales. Looking further ahead, Tesla hopes to begin volume production of the Model Y small SUV by late 2020, providing a new lever for growth.

Nevertheless, Tesla is a very risky stock due to its high valuation and uncertain prospects for gross margin expansion. With federal subsidies quickly shrinking to zero in the U.S., Tesla may have more trouble selling its pricey vehicles than it currently expects. Investors should consider other growth stocks that may offer a better risk-reward trade-off.