The first half of fiscal 2019 is going about as well as it can for the spirits giant.

Diageo (DEO 0.09%) is one of only a handful of companies that control most of the global spirits industry. That's given the company a lot of brand cachet and pricing power in a business that continues to steadily grow year after year.

In fiscal 2019, the company continues to bet on its biggest, most well-known brands to drive growth, and the strategy is succeeding. Here's what results looked like for the recently-reported first half of the year. 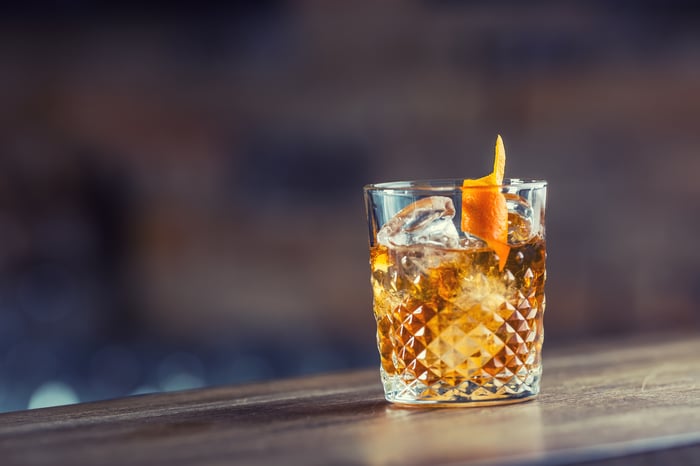 What happened with Diageo this quarter?

The top-line numbers were great, and growth was broad-based, driven by gin and tequila. Here are the details behind the numbers:

As the business continues to do well, management has focused on fewer brands and used cash flow to buy back stock. In December 2018, Diageo sold 19 brands to Sazerac, and in the first half of fiscal 2019, the company bought back 1.28 billion pounds of stock as part of a 3-billion-pound buyback program. Diageo is doubling down on its premium brands, and right now the strategy appears to be working.

As strong as the first half of the year was, CEO Ivan Menezes acknowledged that some of the sales gains were one-time in nature and didn't change the company's outlook. He stated, "This half has benefited from some one-time and phasing gains in both organic net sales and operating profit, and therefore we continue to expect to deliver mid-single digit organic net sales growth for the year and to expand operating margins in line with our previous guidance of 175 [basis points] for the three years ending 30 June 2019."

Growth drivers such as price increases aren't something a company like Diageo normally implements multiple times a year, so in the periods when price increases take hold, there is an outsized impact on growth, which is what we saw in the first half of fiscal 2019.

Diageo continues to ride its "global giants" brands to strong growth numbers, while the wide variety of spirits in its portfolio have helped soften the blow of changing global tastes. Management continues to see mid-single-digit growth and expanding margins for 2019, which is about the best investors could ask for from a mature spirits business.