Please ensure Javascript is enabled for purposes of website accessibility
Log In Help Join The Motley Fool
Free Article Join Over 1 Million Premium Members And Get More In-Depth Stock Guidance and Research
By Billy Duberstein – Updated Apr 24, 2019 at 11:48AM

Are you a conservative investor but also a believer in the power of transformative technology? Then KLA Corporation (KLAC -1.46%) might be a great stock for you.

KLA (which just changed its name from KLA-Tencor) provides wafer inspection and patterning equipment for the memory and semiconductor industries.

As chipmakers pack more and more transistors into smaller and smaller areas, the process becomes harder and harder. That means chipmakers are increasingly relying on KLA's equipment to prevent mistakes, which can be extremely costly to manufacturers. The company is the dominant player and it supplies most of the industry, so no matter which chip comes out on top, odds are it will have been touched by KLA's equipment at some point.

KLA just reported impressive results amid a challenging time for the semiconductor industry, sending shares up 5% the next day. Management also gave its outlook for the company and industry for 2019, which should be of interest to all tech investors. 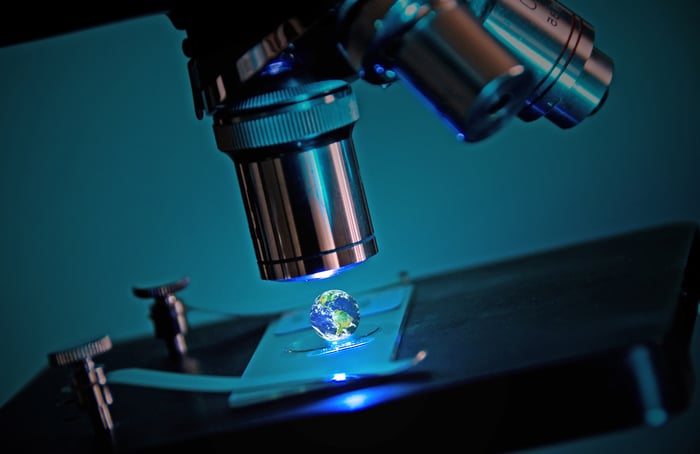 A big beat...but with caveats

At first glance, KLA's results blew estimates out of the water. For December (fiscal Q2), KLA reported $1.12 billion in revenue -- up 14.8% year over year -- beating analyst estimates by $50 million. Earnings per share of $2.44 also handily beat expectations of just $2.20.

While those numbers are impressive, the results incorporated $65 million of project "pull-ins," from the March quarter to the December quarter. That pulled-forward revenue, which benefited December, will thus hurt March. Management guided for lower revenue of only $880 million to $960 million in the current quarter, along with lower non-GAAP EPS of $1.39 to $1.72.

The current quarter will also suffer from delays by two large memory customers, who decided to push out their capital projects from the first quarter to mid- to late 2019. Memory prices have fallen sharply amid U.S.-China tensions, but management reiterated its long-term optimism in that segment. The company expects the quarter ending in March to be the low point in the year, as those memory projects should ramp up in the coming quarters. That may have helped fuel the optimism around KLA's shares, despite the lower guidance.

Last quarter, 61% of shipments were from the memory industry, but that will fall to just 40% in March. However, management expects foundry customers to offset the memory weakness somewhat, projecting the foundry segment to grow and increase to 50% of shipments, up from 24% in December. Due to that diversity across memory, foundry, logic, and services, management still expects to outperform the wafer equipment industry in 2019.

In addition to memory weakness, KLA is also taking a hit from the Chinese market. The recent U.S. ban on equipment sales to China's Fujian Jinhua Integrated Circuit Co. is affecting KLA.

Still, the shortfall is hardly a disaster. KLA now expects China shipments to decline 10% to 15% in 2019 versus previous expectations of flat shipments, due to the Fujian ban and macroeconomic conditions. China made up around 24% of shipments last quarter, so a 10% to 15% decline will only affect 2019 results by 2.5% to 3%, all else being equal.

One of the overlooked strengths of KLA's business, one that should help falling shipments, is its services segment. KLA's services are tied to its growing installed base, and they help extend the life of older equipment. Management expects long-term annual services growth of 9% to 11% to fulfill this growing need. Given that services made up 24% of revenue last quarter, that's a nice base of recurring, growing revenue to help smooth out equipment purchase cycles.

Finally, KLA is still awaiting Chinese approval for its $3.4 billion acquisition of Israeli company Orbotech (NASDAQ: ORBK). Amid the tense U.S.-China trade dispute, some have questioned whether the acquisition will go through. But on the call with analysts, management said discussions with the Chinese authorities are progressing and that it expects the acquisition to close this quarter.

While management's statement seemed pretty confident, whether China will use the merger as a bargaining chip in its trade talks remains to be seen.

While the U.S.-China trade war is certainly having an effect on KLA, it was good to see the company post solid results given known industry headwinds. KLA's stock had sold off along with many other tech stocks late last year, but at just 12 times forward earnings with a nearly 3% dividend yield, the stock still seems pretty cheap, even after its post-earnings pop.