General Motors (GM -2.68%) reported net income of $2 billion for the fourth quarter of 2018, as strong sales of crossovers and pickups in the U.S. helped offset restructuring costs and losses abroad.

Excluding one-time items, GM reported earnings of $1.43 per share, down 13% from the year-ago period but well ahead of the $1.22 consensus Wall Street estimate.

For the full year, GM reported net income of $8.1 billion and adjusted earnings per share of $6.54. 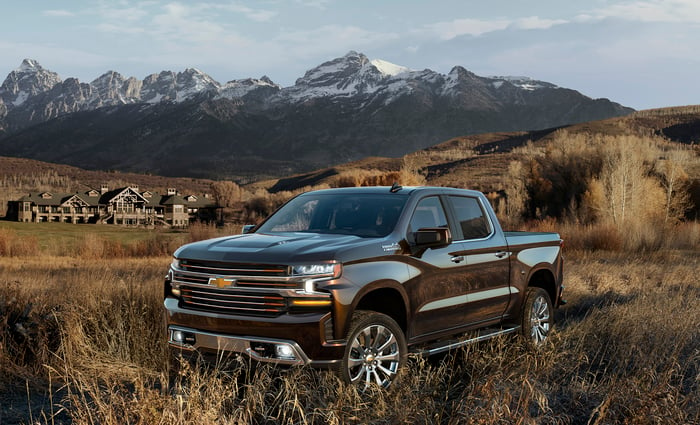 GM's fourth quarter in a nutshell

GM's profit in the fourth quarter was driven by the North America unit and the financial-services arm, thanks to strong sales of GM's new pickup trucks and its still-fairly-new crossover SUVs, as well as GM's success in expanding its leasing and lending business around the world.

Below are results for each of GM's principal business units. Except as noted, all of the profit and loss numbers in this section are presented on an EBIT-adjusted basis.

GM took a one-time charge of $1.33 billion in the fourth quarter for "transformation activities" related to the restructuring effort in North America that it announced in November of last year. Much of that charge went to cover the costs of employee separations and accelerated depreciation, GM said.

GM also issued its annual update on its pension funding status. GM said that while its U.S. pension, non-U.S. pension, and OPEB ("other post-employee benefits") portfolios are all still underfunded, they are all better funded than at any time since GM emerged from bankruptcy in 2009.

Looking ahead: GM's guidance for 2019

GM's guidance for 2019 is unchanged from the presentation it gave to investors in January. It still expects full-year adjusted earnings per share between $6.50 and $7, and adjusted automotive free cash flow of between $4.5 billion and $6 billion.