A major concern for shareholders dissipated during the month, and buyers returned en masse.

Synchrony shares rose along with the general market in the first half of January (the S&P 500 index posted an outsized 8% return for the month), but they also enjoyed a monster leap of 11% on Jan. 23, when the company reported fourth-quarter 2018 earnings.

Specifically, investors reacted very favorably to the news that Walmart has agreed to drop its lawsuit against Synchrony. The suit was a consequence of the companies' inability to come to terms on a renewal of Walmart's retail credit card program run by Synchrony, which is set to expire in July 2019. Synchrony now intends to sell the portfolio to Capital One.

Confidence in Synchrony's ability to retain major clients, which had ebbed after the Walmart split, was restored as the company signed significant program renewals with Walmart's Sam's Club as well as Amazon.com. The company also announced, along with its earnings, that it has expanded its CareCredit consumer health-financing business, getting Walgreens to agree to begin accepting the CareCredit card.

The company also generated 9% year-over-year growth in its payments solutions loan receivables, propelled by luxury goods and home furnishings purchases. CareCredit loan receivables expanded by 7% over the prior year, due to dental and veterinary spending.

Overall loan credit quality also improved, outside of the PayPal portfolio, which has a lower credit profile. Loans past due 30 days or more as a percentage of total receivables at quarter end rose to 4.76%, against 4.67% in the fourth quarter of 2017. However, excluding PayPal receivables, past-due loans decreased by roughly 15 basis points. 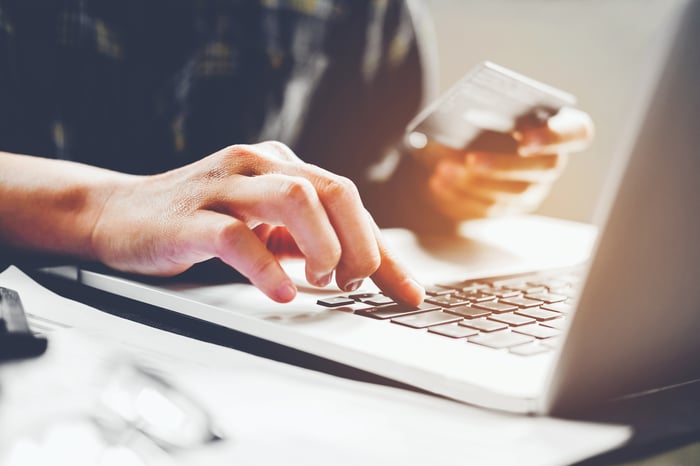 Synchrony shares still look attractive. Though it's recovered all but 12 percentage points of last year's 40% swoon, the stock still trades at just 6 times forward one-year earnings. While shareholders wait for other investors to discover Synchrony's relative value, they can enjoy a quarterly dividend that yields nearly 3% on an annualized basis.

John Mackey, CEO of Whole Foods Market, an Amazon subsidiary, is a member of The Motley Fool's board of directors. Asit Sharma has no position in any of the stocks mentioned. The Motley Fool owns shares of and recommends Amazon and PayPal Holdings. The Motley Fool has a disclosure policy.