Friday began on a down note for the stock market, as worries about trade tensions and macroeconomic sluggishness weighed on investor sentiment. As of 11:35 a.m. EST, the Dow Jones Industrial Average (DJINDICES:^DJI) had fallen 274 points to 24,895. The broader market also dropped sharply, with the S&P 500 (SNPINDEX:^GSPC) down 22 points to 2,685 and the Nasdaq Composite (NASDAQINDEX:^IXIC) declining 51 points to 7,237.

U.S. stocks have enjoyed years of strong gains, but the situation hasn't been as rosy for many companies that do business across the globe. India's Tata Motors (NYSE:TTM), which owns key car brands such as Jaguar and Land Rover, gave investors an extremely tough financial report that led to two days' worth of severe share-price declines. Yet closer to home, Motorola Solutions (NYSE:MSI) has made a name for itself with its services to enterprise and government customers. 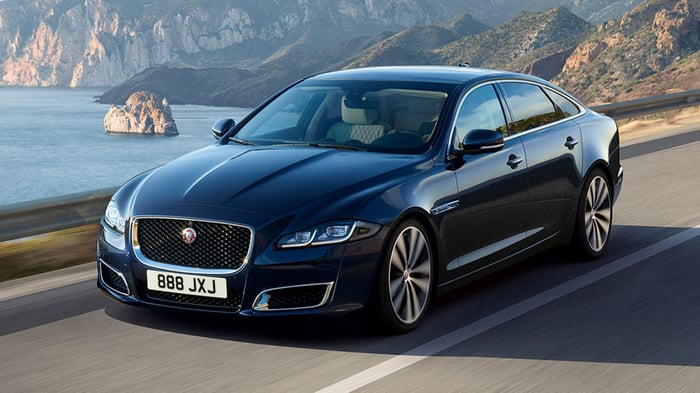 Tata Motors saw its stock drop another 9% Friday morning, adding to losses Thursday after the Indian automaker and industrial giant reported the largest loss of any Indian company in the nation's business history. Tata reported that its Jaguar Land Rover Automotive subsidiary took an asset impairment charge of more than 278 billion Indian rupees -- equating to about $3.9 billion -- during the fourth quarter of 2018.

One big problem that Jaguar Land Rover is facing is a change in consumer preferences when it comes to vehicles. For a long time, the diesel vehicles that Jaguar preferred were in vogue. But recent scandals concerning performance of diesel engines and the push toward electric and hybrid vehicles has left Jaguar and Land Rover without the same level of support from their customer base. At the same time, Jaguar and Land Rover both have a luxury perception at the high end of the automotive market, and that's a tough sell in emerging markets like China and India, where price-based competition is a lot fiercer than it is in developed markets like the U.S. and Europe.

The size of the loss is enough to affect Tata's entire financial condition. Investors are watching not just Tata shares but also its bonds, as the cost to protect bond investments against default in the credit-default swap market has skyrocketed over the past year. Without a turnaround for the key Jaguar Land Rover segment, Tata could face catastrophic financial problems if it can't move forward with efforts to cut costs, boost cash flow, and become more competitive in high-growth markets worldwide.

Meanwhile, Motorola Solutions shares picked up 14%. The company reported a 15% rise in revenue that led to a 25% jump in adjusted earnings per share during the fourth quarter of 2018, and backlog levels rose by 10% to a whopping $10.6 billion. A combination of acquisitions and organic growth in key areas including the Americas and the greater European region helped to push Motorola's top line higher, and clients with particularly large needs in the services and software business have turned to the company.

Of particular importance was a contract extension through 2022 for the Airwave network covering the U.K. market, which will be worth roughly $1.1 billion. Yet Motorola also sees double-digit percentage growth in sales to start out 2019, and even though full-year revenue gains will likely slow from their current pace, the company remains optimistic about its ability to capitalize on opportunities to serve both the private and public sectors.

Many investors continue to think of Motorola for its consumer handset business, which got spun off as Motorola Mobility almost a decade ago. Yet with continued demand for land-based radio systems and other solutions, Motorola Solutions has generated considerable success -- and its efforts look likely to keep paying off for shareholders for the foreseeable future.